The Great Elf on the Shelf Break-Up The elf on the shelf--it began easily enough: a flurry of  imagination and excitement, visions of a new avenue to pave with fond family memories. And so year after year, this delightful little visitor would show up to make mirth, merriment and messes in my home during the busiest of seasons. His antics were great fun, and all of the labor that went into his amusing tableaus was absolutely worth the joy it brought. 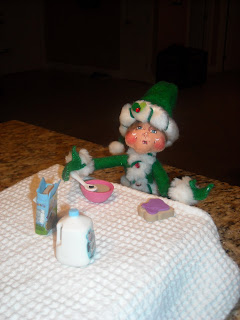 Eventually, it was less fun though.

So many December nights of sleep interrupted with a start--had he moved? What would he do next? Did he have to?

So many tired mornings where his creativity was awarded with a cursory glance and barely a comment before the day began.

So many craft supplies. Glitter can kiss my ass, for real, yo.

And so this year, when thinking of Christmas, Harold Hubert Piggybottom was no longer a tradition that made me light up with holiday excitement. At all. There was some mention of his possible arrival from my 8-year-old and I listened with trepidation to these requests, and tried to gauge their sincerity. My 11-year-old was media blackout-style quiet at any mention of Santa or elves, his silence saying more than words could.

And then Christmas magic happened.

We arrived home from having after school ice cream to find a package on our doorstep. 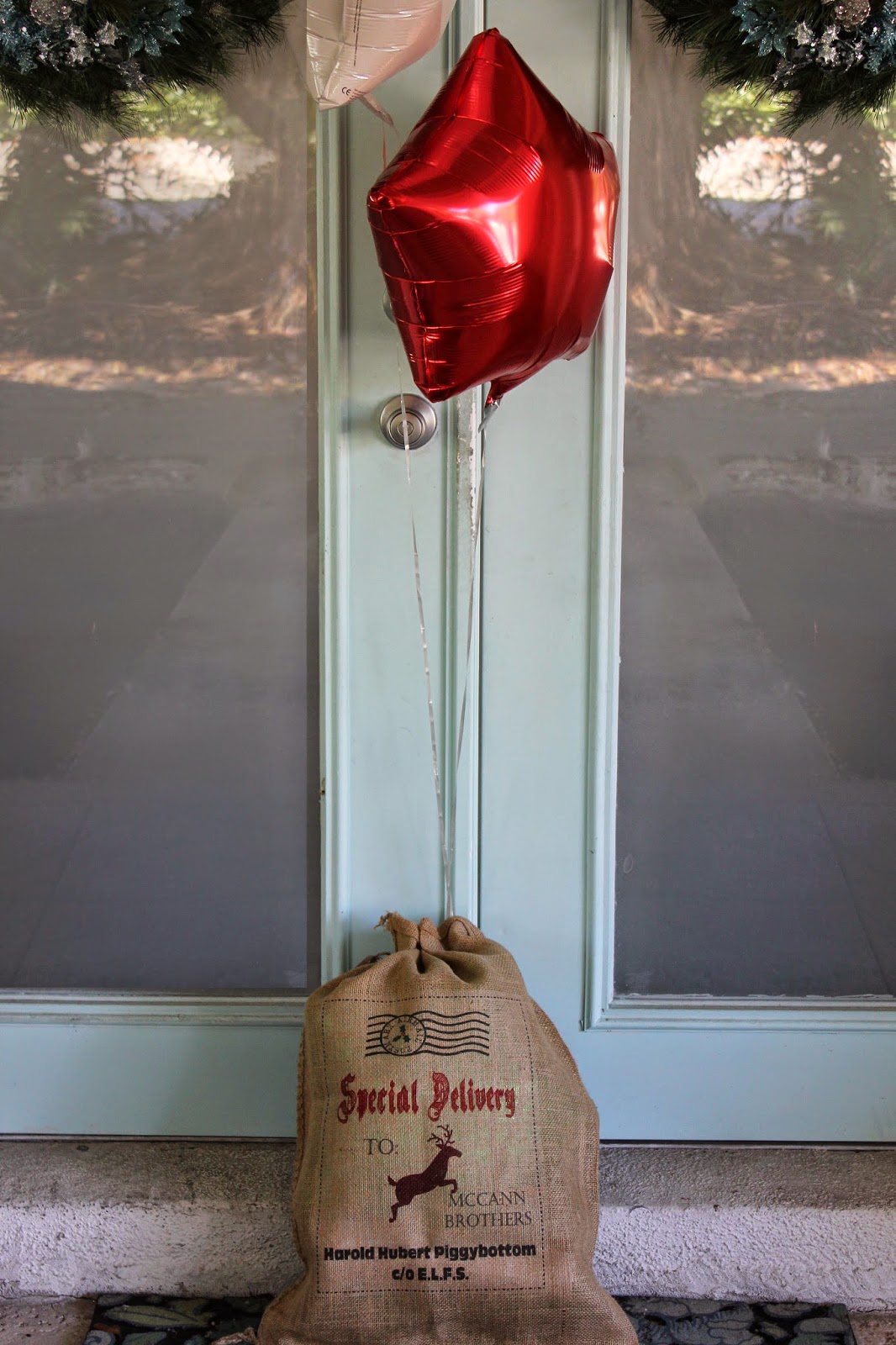 Both kids started cheering that it must be Harold, since the package was so festive and had his name on it, and I was really nervous for what was to come next. 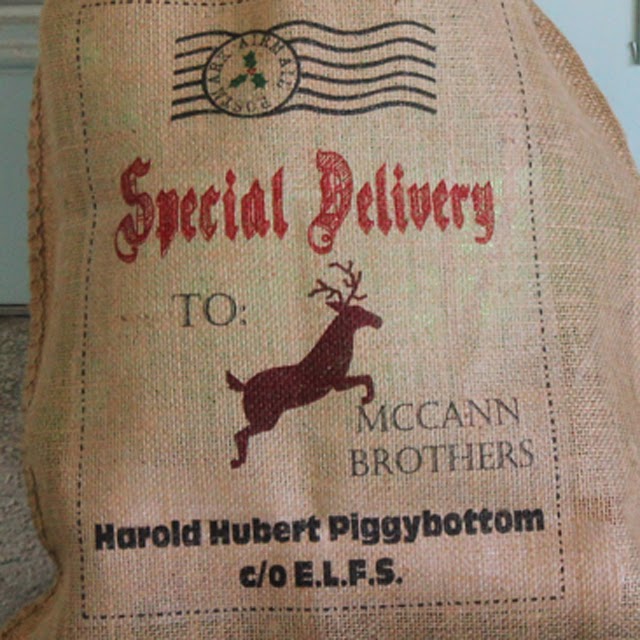 Once the sack was opened, a balloon floated out with a scroll tied to its end. The scroll said: 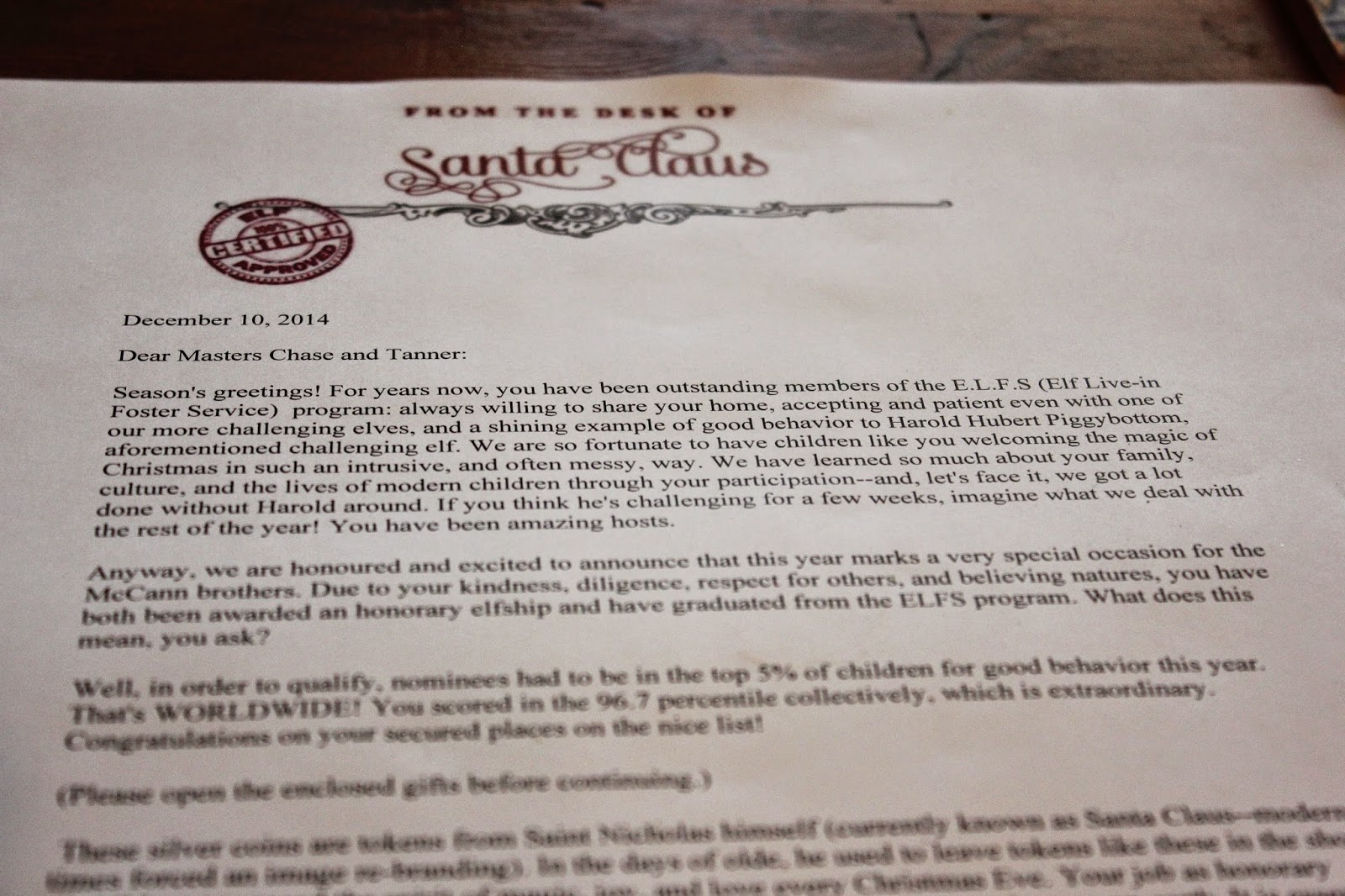 Season's greetings! For years now, you have been outstanding members of the E.L.F.S (Elf Live-in Foster Service) program: always willing to share your home, accepting and patient even with one of our more challenging elves, and a shining example of good behavior to Harold Hubert Piggybottom, aforementioned challenging elf. We are so fortunate to have children like you welcoming the magic of Christmas in such an intrusive, and often messy, way. We have learned so much about your family, culture, and the lives of modern children through your participation--and, let's face it, we got a lot done without Harold around. If you think he's challenging for a few weeks, imagine what we deal with the rest of the year! You have been amazing hosts.

Anyway, we are honoured and excited to announce that this year marks a very special occasion for the McCann brothers. Due to your kindness, diligence, respect for others, and believing natures, you have both been awarded an honorary elfship and have graduated from the ELFS program. What does this mean, you ask?

Well, in order to qualify, nominees had to be in the top 5% of children for good behavior this year. That's WORLDWIDE! You scored in the 96.7 percentile collectively, which is extraordinary. Congratulations on your secured places on the nice list!


At this point they paused and opened the boxes. 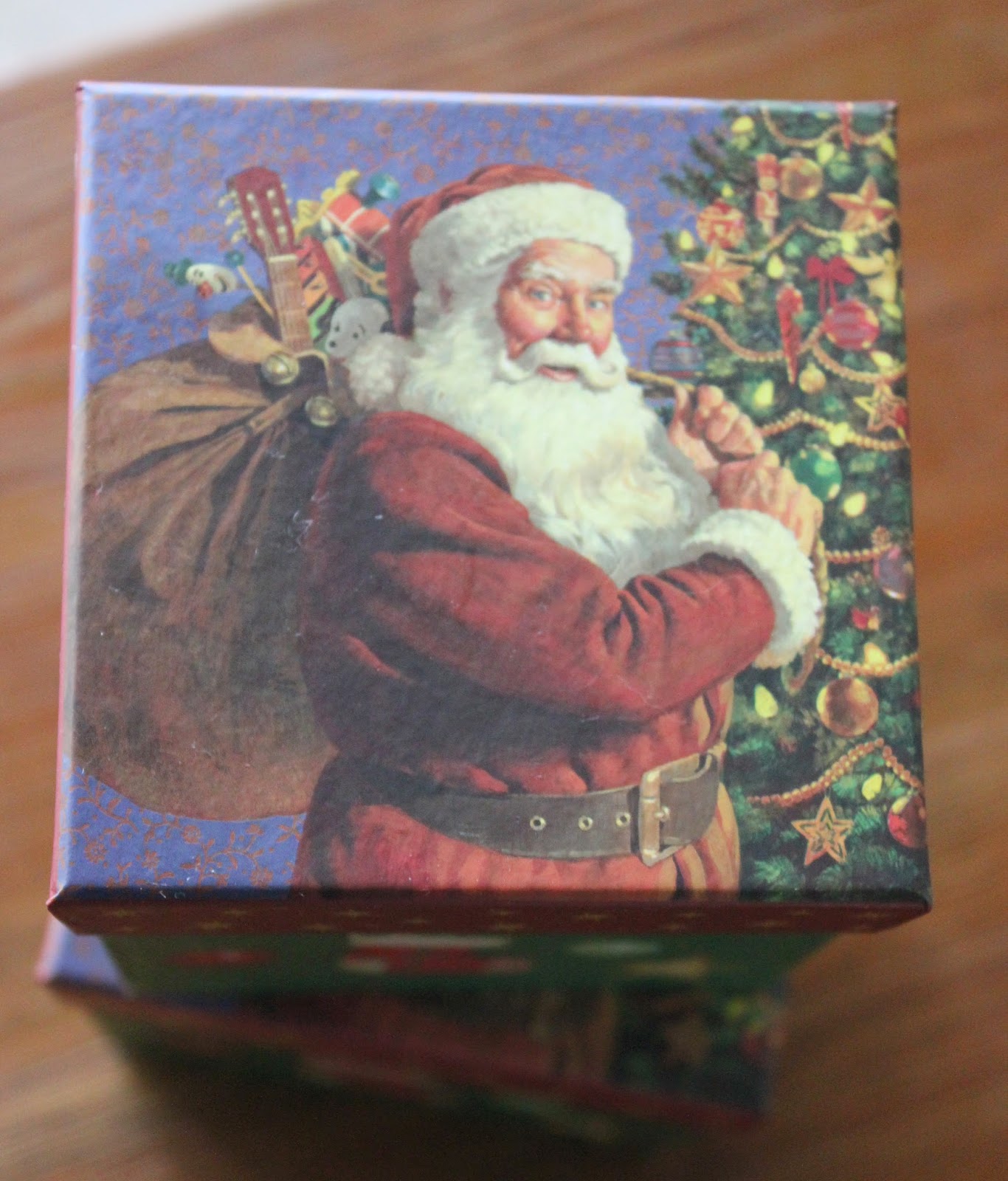 And found silver coins nestled within (within Easter grass, which is STRICTLY forbidden in this house, even more so than glitter. Seriously, Santa?). 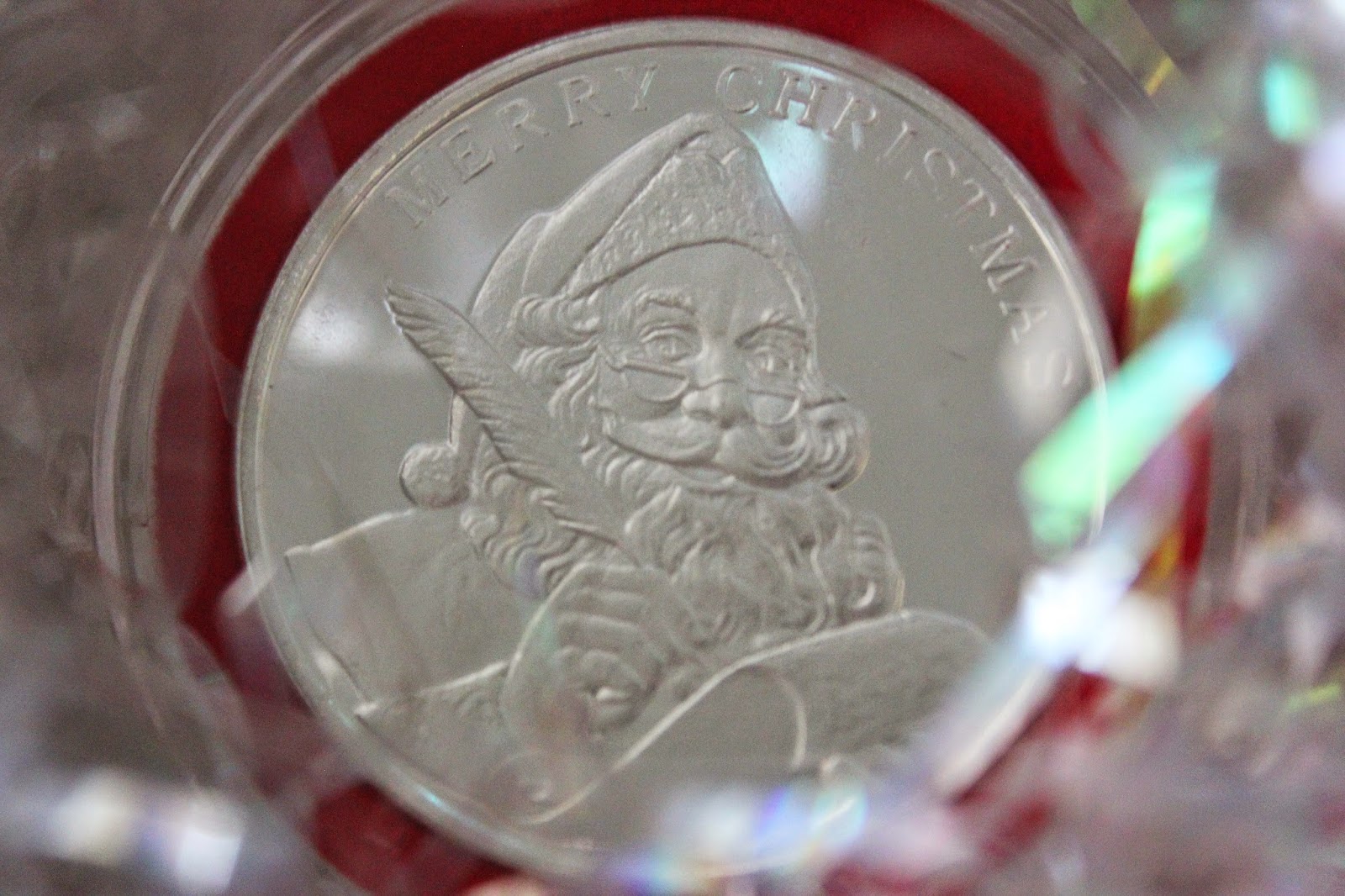 There was some hushed awe as they flipped them over in their hands and marveled at the weight. I continued reading:

These silver coins are tokens from Saint Nicholas himself (currently known as Santa Claus--modern times forced an image re-branding). In the days of olde, he used to leave tokens like these in the shoes of children to spread the spirit of magic, joy, and love every Christmas Eve. Your job as honorary elves is to continue to practice the spirit of kindness and giving to spread peace on earth. It is essential that the children on the good list help establish our future through their strong leadership skills and we know the McCann brothers are up to the job.

(Yes, it's real silver. Try not to pawn the spirit of Christmas, though, okay? Santa hates seeing these things on ebay.)

Your honorary elf names are Tippy Tannerick Trueluck and Chip Chaseton Chariot. We don't expect you to put that on your driver's license or anything; it's a designation similar to when the Queen of England knights rock stars, and does not afford you lodging or employment at the North Pole.

I'm sure you are wondering what this means for your friend Harold Hubert. Well, we are also proud to announce that other than an "accidental" incident with a silly string machine (please note: we are no longer gifting silly string or any variation thereof due to its high flammability rating), his behavior has been exemplary. He has been nominated as community leader and will be the co-pilot for this year's present drop, which is a great honor. His excitement is infectious, we are all hopeful and optimistic about his new role!

Harold loves you both and has vowed to verify your names on the nice list each year, but I have to confess that as of now, Harold isn't allowed near the lists so I'm not sure why he promised that. But maybe one day, right? (Note to self: double check the security of the list vault.)

One last thing, your confidentiality in this matter is of the utmost importance. If other children knew about this honor, their behavior may be influenced for the sake of a prize which is not true niceness, so we ask that you not share this exciting news with your classmates or online. You may tell adults, as most have lost their magic and may not believe you anyway, which is an unfortunate symptom of growing up. As honorary elves, we know that you will become the type of adults who help keep magic alive.

Thank you for inviting us into your delightful home. Please continue to make life magical. Harold Hubert Piggybottom will always live on in your hearts and will be watching...from a safe distance. Have the merriest of Christmases, this year and always. 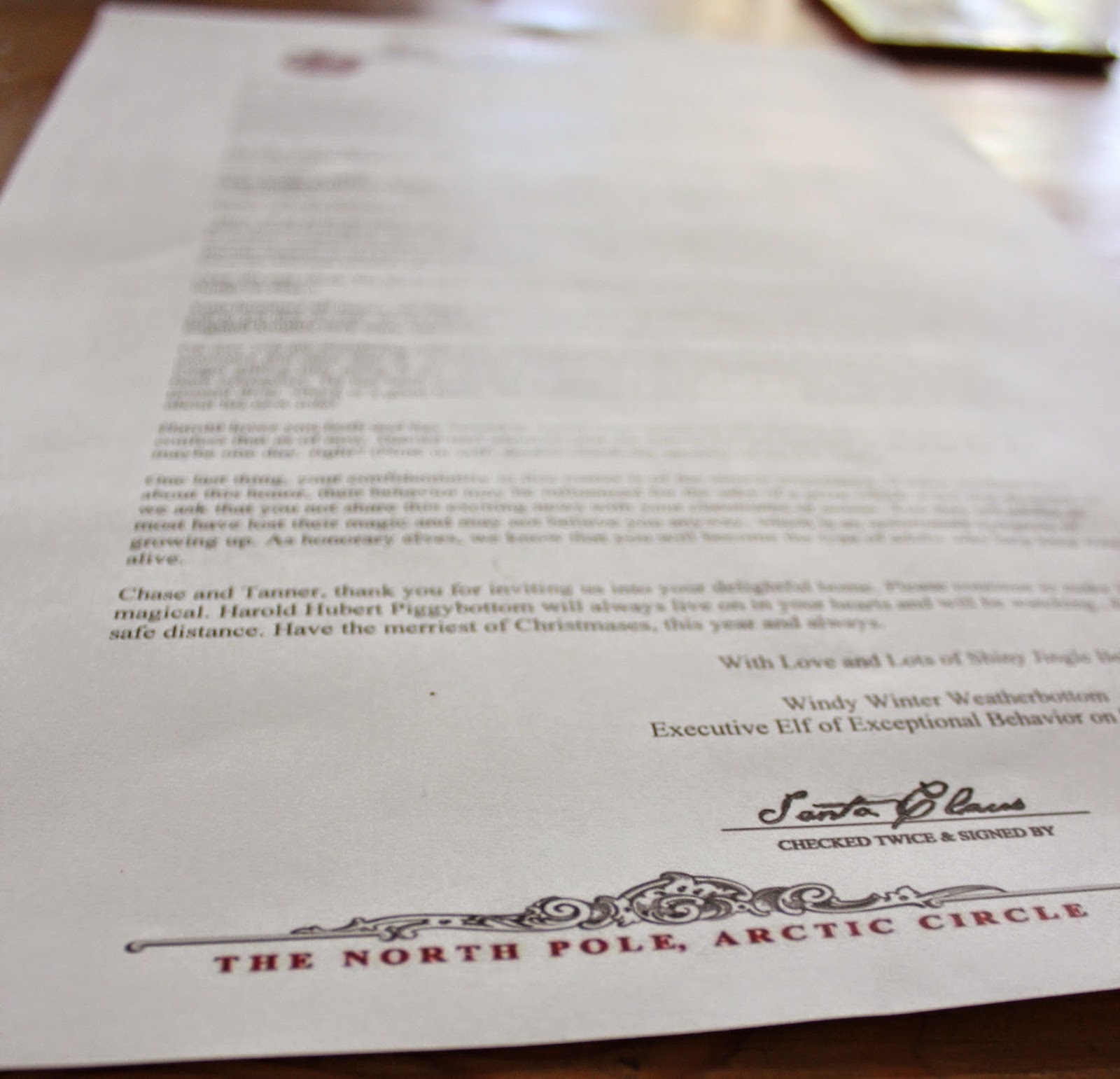 "Wow," I concluded. "This is insane, I've never heard of anything like it. The top 5%? Wow, you guys, congratulations. That silver coin is amazing."

"I'm pawning mine on eBay," Big Kid stated, as I gave him a look he ignored.

"Dude, this is a collectible. You sell it on eBay and you'll get the value of the silver but if you hold on to this thing, bro, it's gonna be worth a ton of cash some day. I wonder when our elf is coming?" little kid said.

My heart sunk a bit. I thought the message had been clear. "Uh, I don't think an elf is coming," I picked up the scroll again. "It says you've graduated, I think that indicates that you've moved beyond needing an elf--"

"But you got the silver," I reminded him.

"Yes!!" His smile returned. "Now I will get silver every year, probably with a different design on it. That's a pretty good deal."

"Well, I don't know. I'm not sure you get the silver every year."

"Oh, I'm sure that I do. It's like a special club. Where you get silver every year."

"Hmm." Okay, I reminded myself, it's a small price to pay.

"Then I bet you won't get more than one because it said not to sell them on eBay," I said, with a hard edge in my voice. He smirked at me.

"Now I KNOW Santa is real because there is no way parents could get their hands on a collectible like this," little kid said with wonder in his voice, turning the coin over in his hand again before shining it on his shirt. "It's going to be so hard not to tell the other kids but I don't think we should, bro. But I don't think anyone in my class is in the club, because they would've told me. Mom, can I write Santa a thank you note?"

I told him he could. I wanted to write him one as well. 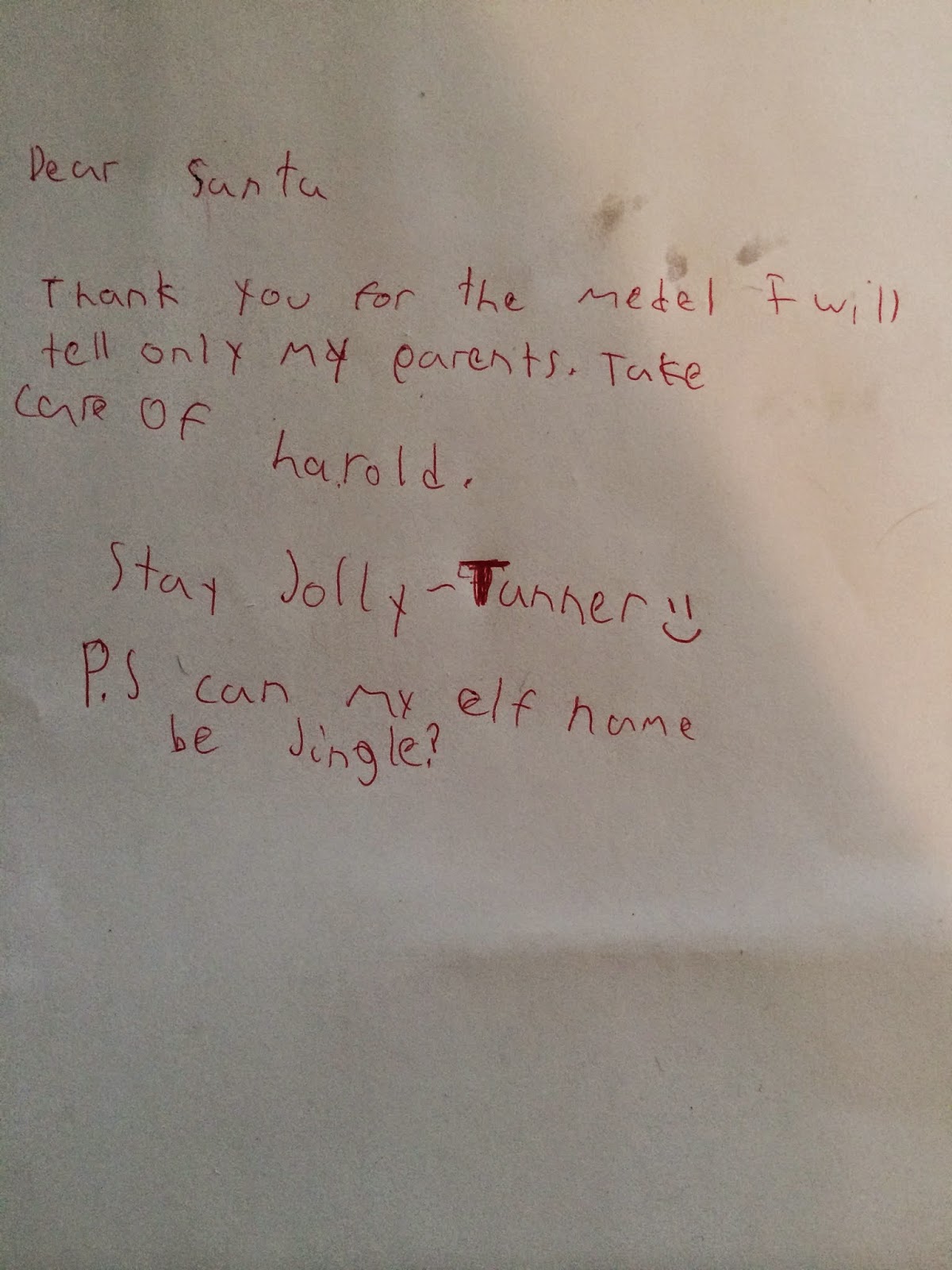 Neither child liked their honorary elf name. The silver has been mentioned a few times since the arrival of the package, but the elf has not.

And that's how we broke up with our elf on the shelf. Our time with Harold was magical and I don't regret it--I'm just happy the relationship ended before the magic did.

Click here to read more about our life with Harold Hubert Piggybottom.
Posted by Ashley

Email ThisBlogThis!Share to TwitterShare to FacebookShare to Pinterest
Labels: Elf on the Shelf break up letter, goodbye Harold Hubert Piggybottom

Awesome!We've had out "elf on the Shelf" moments too...

You, madam, are a GENIUS. xo

This totally made me cry!! I have enjoyed all of the Harold stories for so long. He's the reason we got our elf! Although, I'm way to lazy to pull of all of those shenanigans! Our elf just moves to a different location every night.
The break-up letter was absolutely perfect, and if you don't mind I'm probably going to steal the idea when the time comes. :)

This is the cutest thing ever - my daughter is a little young to start with the elf, but what a great idea. I've only read how annoying the elf is in other posts and while you mention that - this story brings it around full circle!

love this - so cute!

Wow! That is amazing. What a clever way to break up and make a new awesome memory for your kids!

That is an excellent break-up message! I hope Santa has an adequate supply of silver for future years.

I love this! Such a wonderful idea!

As always, I am in awe of your kind and creative parenting. What magic you bring to those boys - and how lucky they are to have you!

I love it! Our Elf came when Charlie was older so he has never quite gotten into the whole thing. Our Elf was also a bit of a slacker (so's our Tooth Fairy)and didn't always move and certainly never did anything exciting.

This was such a beautifully written end of an era. Kudos to you and Merry Christmas!