I have just completed the 13th edition of my resume. I am so sick of myself and my work experience and my blahblahblah cover letters that I could scream. I write new cover letters for every job too, so I've probably written over 100 of those by now.

I have resumes related to:
Business to business marketing
Online marketing/social media development
Real Estate (Although it is my area of expertise, this is my most barf-tastic resume. The one I just completed was real estate-related and if I get that job, I might cry. No, I will cry. I will need therapy to get back into this industry.)
Sales
Customer Service
Writing (Copy writing, website content development, article writing, blog writing, and ironically....resume writing!)
Restaurant experience (I hardly have any--but since when do you have to?? I actually waited a ton of tables between 15-18 but I guess that experience expires because no one cares.)
Education/parenting (I have been applying for nanny jobs, people. Would you want me to be your nanny? Desperate times.)

I have been unemployed for a year and a HALF. Yes, I've started calling it "being a stay at home mom" and yes, I have started enjoying it but I have been continuously looking for employment and have gone on only 2 interviews--one with a creepy Craigslist psycho who lived out in the woods and had charges against him for assault with a non-deadly weapon toward his ex-wife. He warned me that she may attempt to get onto the property and if I saw her I had to call the police. I was offered that job but had to turn it down. Because I don't want a job that bad.

But I do want a job badly enough that I applied at Wal-mart once. They weren't interested. But the next time I shopped there, my cashier had words tattooed where her eyebrows should be. HOW IS SHE A BETTER CANDIDATE THAN ME? It's a sad situation when "No facial tattoos" doesn't put me near the top of the application pile.

The whole Charlotte thing is on hold due to unexpected management changes and construction delays so we're in this awkward state of limbo with what to do in life. I'm thinking of going back to school because you know if I set down a large chunk of money and commit to something, Mr. Ashley will get a great offer in a city we love and everything can be all chaotic and complicated again.
Posted by Unknown 8 comments:

Email ThisBlogThis!Share to TwitterShare to FacebookShare to Pinterest
Labels: because that's how we roll

I'm super tired. Being Summer Social Director for the kids is extremely tiring. So here are some things that I found mild to moderately amusing, in lieu of actual thinking/writing:

Where Do Babies Come From?

The other day we watched a video on Facebook of friends' kids as they opened an envelope and revealed the gender of their new baby. After much discussion of what their lives would be like with a new baby brother, little kid started asking questions about babies (and I HATE these kinds of questions):

"Where did she buy 'at baby brudder? How do you buy a baby boy for you's tummy?"

"Hmmmm. I am not sure," I said, not in the mood to get into it right then.

"Did she say she bought the baby? I can't remember. I don't really know anything about buying boy babies," I answered almost truthfully.

"I'm gonna aks her," he promised. I ignored him because I hope he won't. And again, I wasn't in the mood for a big discussion right then (and to be fair, I spend 90% of his waking hours engaged in a never ending, all day long conversation with him. I talk all.day.long, like it or not, even when I'm in the bathroom.)

"I think she's gonna be pretty shocked," he continued.

"Shocked at what? Asking where she got her baby? Please don't do that, it's kind of rude."

"No--here's the shocking part...that baby's got to get out of his mom's tummy! That's pretty shocking."

Although we were going down a path I knew I didn't want to go down, I laughed and agreed that it was shocking.

"Were you shocked?" he asked.

"Yes. You could definitely say I was shocked."

And then, amazingly, the conversation was over.

And that's how not to talk to your kids about sex, folks!
Posted by Unknown 7 comments:

Email ThisBlogThis!Share to TwitterShare to FacebookShare to Pinterest
Labels: I think Babies r Us has some in stock

little kid went to vacation bible school last week. Except for the one day we skipped to go to the beach. I still think his church is weird; I remember VBS being a lot of games and crafts and learning Bible verses and hearing stories. His was mostly songs and time spent in small groups with the pastor. Whenever I asked him what he learned that day, he would recite, "That Jesus died for our sins," like a little automaton. I know he has no idea what that really means (since it's a subject that still confuses me) and I was hoping he'd learn more along the lines of "Do unto others" and "Obey your parents" and stuff about little lambs and Jesus making bread for everyone.

One day he came home and blurted out, "You better not steal," while we were doing something totally unrelated to stealing.

He then tilted his head to the side like he was thinking for a moment and added, "Unless you have a really fast car."

"Can I give you a hug, bubby?" Big Kid asked little kid.

little kid stared at him for a moment. "Have you washed your hands?" asked the boy who unashamedly eats his own earwax and has his hands down his pants more often than not.

"Yes! I washed my hands and face after dinner, with soap. So I can hug you?"

"You're mean, little kid," I admonished,"That's really rude of you..."

"It's okay, mom. I don't mind washin' my hands again. It's worth it," Big Kid said as little kid sat there smugly.
Posted by Unknown 4 comments:

Email ThisBlogThis!Share to TwitterShare to FacebookShare to Pinterest
Labels: good vs evil-ish

I'm back! When we picked the kids up, there were no police officers or social workers waiting for us so I'm guessing that went well. Or they didn't want to delay our leaving because they were exhausted after 3 nights with my boys.

The interview went okay. The manager was leaving for vacation in 2 hours and seemed preoccupied. It was part 1 of a 3 part process and he took his personal information to begin a background check and there will be a phone interview with some other department when he returns. I'm fairly confident that they want to hire Mr. Ashley but until we get an offer that involves numbers we don't know what will happen with moving.

But, I love Charlotte, NC. I thought the job would probably take us there and I would learn to adapt. Now I'm thinking we will find a way to take us there and the job may adapt. If this situation doesn't work out, we will work towards finding one that will because I really, truly loved it there. I loved the hills, I loved the trees, I loved the neighborhoods and I really, really, really, really loved the city. The part I thought I would like least is absolutely the part I liked most. It was beautiful. It felt clean, smart, safe, calm and fun. Driving wasn't scary. Even the homeless people were nice. I have pictures but they don't want to upload, so maybe later. (Pictures of the city, not the homeless people.)

On the drive home I was so thrilled that we had explored the area; suddenly my home town was shining a little less bright. Stupid pointy palm trees, wet hot weather all day and night, flat landscape, small town with nothing to do, boring one story houses. Blah.

But then I got home. I went to the beach with old friends. I had an amazing summer day with people I really enjoy being around. I dug my feet down in the soft white sand and floated around in the warm Gulf water. I went home and napped during the every day afternoon rain. I do kind of like the stupid pointy palm trees.

I think we're still moving though and I know we will love it. I think the boys will have more opportunities there and I think our overall quality of life would improve. If it's with this job, we would be there at the end of September. If it's not with this job, I'd prefer to wait until the end of the school year and get in one more year of beach time and crazy neighbors and old friends.

Because this is nice too: 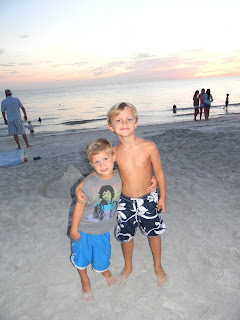 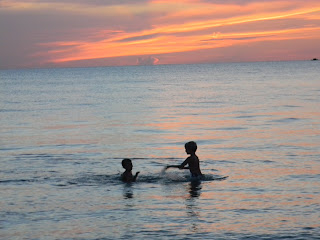 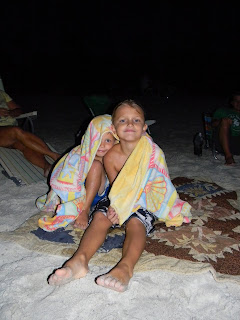 Email ThisBlogThis!Share to TwitterShare to FacebookShare to Pinterest
Labels: if i could just take the beach with me

Later today we begin the drive up to Charlotte for the job interview on Friday. We're dropping the boys off with my inlaws in Savannah, GA. Is it terrible that I am far more concerned about what embarrassing nuggets of information they'll choose to share than for their general safety while we're gone?

I have forbidden them to talk about:
Poop
Pee
Butts
Penises
Nipples (little kid has a bump that he's hoping is a 3rd nipple because he thinks that's cool.)
That one time little kid saw boobs on the computer
Diapers

There is to be no:
Underwear lounging
Unnecessary nudity
Rubbing our butts on people or sitting on them aggressively
Fighting
Spanking each other
Cursing
Peeing in the shower without the water running. (I know you can guess which one would do that but no one knows why)

I have emphasized that they should not do ANYTHING they would not do in front of Santa Claus or Jesus.

I know they will be safe...but will *I* be safe? That's what is important here.

Also, I'd greatly appreciate any recommendations on what to see or do while in Charlotte that may help me figure out if I want to live there or not.
Posted by Unknown 12 comments:

Email ThisBlogThis!Share to TwitterShare to FacebookShare to Pinterest
Labels: but you know they will
Newer Posts Older Posts Home
Subscribe to: Posts (Atom)