My kids are skilled in bedtime delay tactics.

It's a battle I've recently realized I'm going to lose -- they have played a long, cunning, collaborative game of avoiding my authority when it comes to going to bed and they have outwitted and outlasted me at every turn. Now that they're 9 and 12 I feel like I don't really have the time to gain any ground on this particular parenting battleground, so I've pretty much resigned myself to this fate of quiet time starting later than I'd like.

Their favorite tactic is to send one out for another goodnight hug or kiss because what monster would deny her precious offspring a second helping of love? If the one is successful, the other sneaks out too. Yes, yes, it's very sweet, it is but I am available ALL DAY LONG for this kind of affection and there's already a goodnight routine in place. If not wanting to do the nighttime routine twice daily makes me a bad mom, add it to the list. Unfortunately, this one works 85% of the time due to the guilt.

Also, little kid has the gall to request a new tuck-in since his old tuck-in was disrupted when he got out of bed uninvited. He doesn't see how this isn't really our problem but it's easier to just do it. They have worn me down with the constant out-of-bed attacks and I surrender almost immediately these days.

Strategic pooping also has a solid history of effectiveness. We've had a name for this since Big Kid was four, so it's not a new concept. I don't know if they have actually trained their bodies to comply like bedtime avoiding ninjas or if they are taking advantage of the fact that we can't really insist that they not do this but this one works every time and is deployed 2-3 times a week.

We came to a peaceful negotiation at one point where they were allowed to stay up an extra half an hour if they were reading. We felt really smug about this and our kids have been really dedicated readers ever since, but the fact of the matter is that they have slowly combined this deal with their old tactics and now bedtime is even later.

Netflix came up with the brilliant idea of Dinotrux 5 Minute Favorites so that you can promise one more show before bed and really mean it, but don't mention the 5 minute part because they'll catch on to your tricks and you'll be watching 10 episodes of Dinotrux because negotiating at night time is hard.

It's too late for me because my kids are too skilled and I have been defeated. 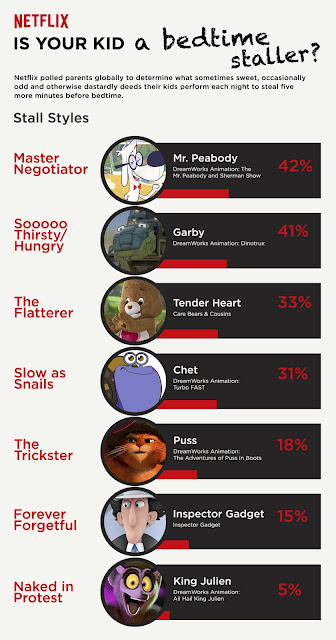 *I am a member of the Netflix Stream Team and was not compensated for this post or these opinions (but sometimes they send me cool stuff, like Popples and Care Bears, and I do love that.) I just want to help moms marching on the same dusty road while also helping Netflix help those moms, and I think there should be more of a general awareness that strategic pooping is a thing.
Posted by Ashley