The Little Prince is Hugely Awesome

I watched The Little Prince on Netflix the other night and can't stop thinking about it. 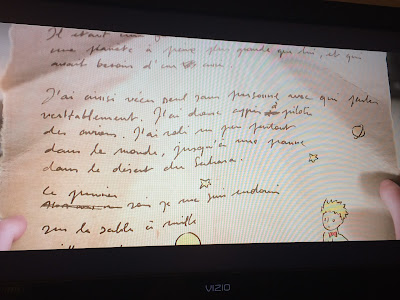 Not only was it stunning to look at, but it was so deeply meaningful. I mostly put it on to fill some time before bed on an endless day, an effort that is mostly futile now that my kids are at an age where they're reluctant to hang out with me.

little kid was hooked immediately and within five minutes declared it a work of art.

But then something interesting happened. Big Kid, 13 and bad ass, food/movie/humanity critic extraordinaire, wandered in and stopped. "Is that stop motion animation?" He asked.

He paced around for a bit, shifting from foot to foot.

We exclaimed about the movie's visual beauty...and he didn't disagree. He slowly, gradually, eventually...joined us on the bed and watched.

He liked it. We all liked something.

I mean, it's more of a miracle than the Virgin Mary on toast.

We were all so moved by the ending and the movie's message that there was even a few minutes of quiet contemplation and discussion afterwards.

I CANNOT believe this movie was released straight to Netflix (no offense Netflix or movie). I would have been thrilled to have seen it in the theater, and I say that as someone who is meh on theaters (thanks to loud popcorn chewers and cell phone checkers). The fact that Netflix is my secret lover has absolutely nothing to do with my love of this movie and my level of "How lucky are we to have seen that so easily and inexpensively?"

We were so blown away by it that each of us interrupted the movie at some point to exclaim over how amazing it all was, and everyone agreed each time.

The Little Prince was beautiful in every way -- to look at, to listen to, to think about and I can't believe it's not all anyone is talking about. I loved it like I love Up, and that's huge.

So, you should watch it. Even if only for a couple of hours of peace and quiet. But it will be more than that. 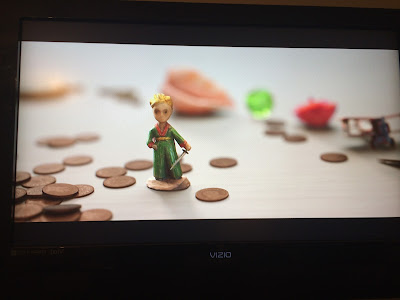 *I wrote this post as a member of the Netflix Stream Team. I receive free Netflix in exchange for sharing my thoughts on what I'm watching on Netflix, and sometimes Netflix and I flirt with each other a little bit. It's like a friends with benefits thing, but the benefits are Netflix originals and hearing me talk about them so I'm clearly the winner of this deal but don't tell them I said that.
Posted by Ashley

My daughter is OBSESSED with Stranger Things. Does big kid watch that?