So, I don't know if I told you all but Big Kid has decided he wants to be a puppeteer when he grows up.

This is not even on the top 1000 list of jobs I had envisioned for him. Has any parent in the history of the universe hoped that their child grew up to be a puppeteer? I tried to ignore it for a while, but this desire has persisted. He now knows more about Jim Henson than Jim Henson knew about Jim Henson.

Once I realized this wasn't going away, I bought him these. These were expensive: 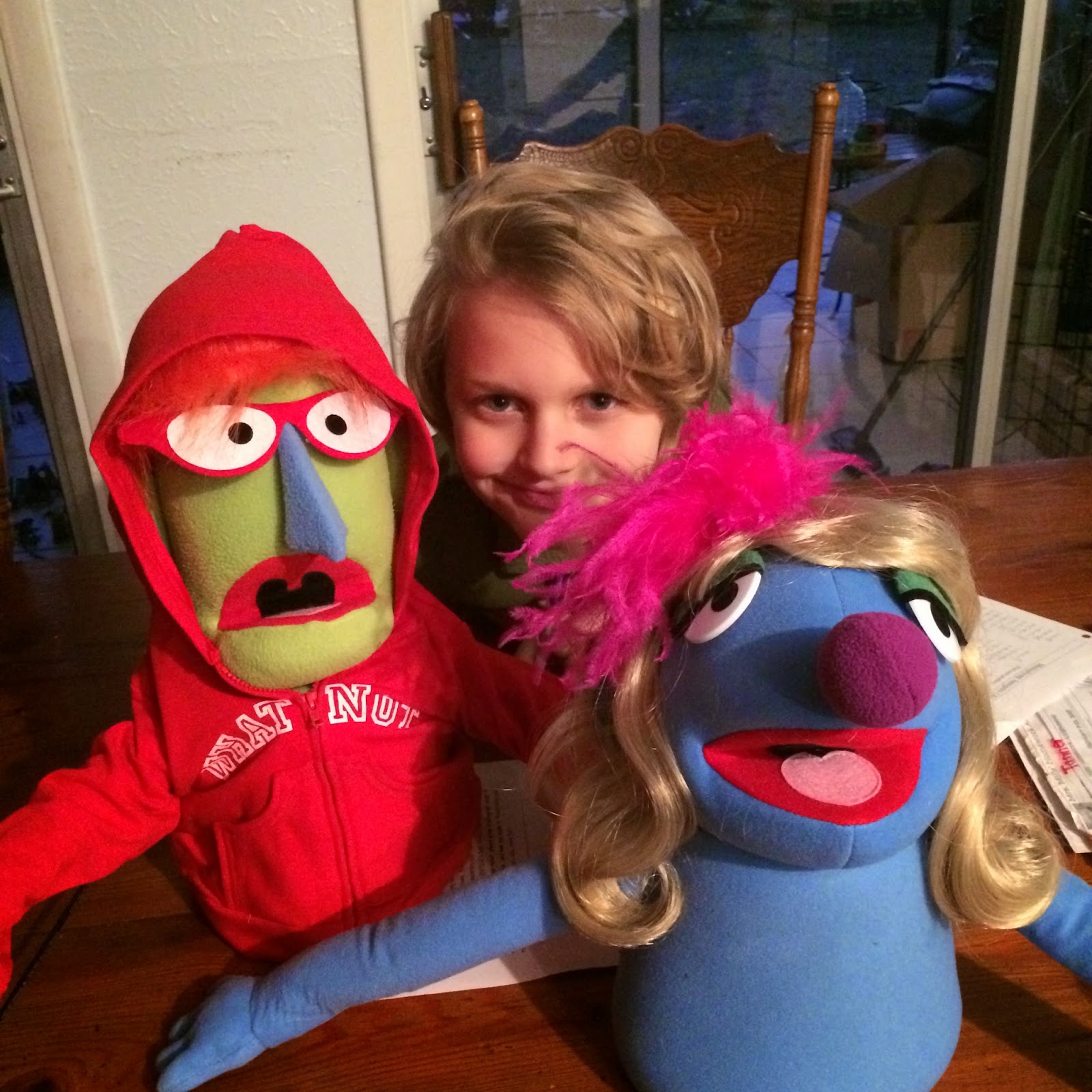 But Jim Henson makes his own puppets. Using these puppets might be a form of puppet plagiarism.

(I couldn't make this shit up if I tried.)

So he made a puppet, and it's his favorite: and he is creating a skit show with these puppets, with a narrator named Khaki. The series title is "Khaki Shorts," which I think is hilarious. The puppet above is named Dominick, which was little kid's contribution to this whole ordeal. Please pray those expensive puppets make an appearance soon--I've been working on convincing him that it's what Jim would have wanted.

Every few mornings I wake up to find scribbled notes on his white board and he apologizes for having to get out of bed and record these ideas the moment inspiration strikes. He loses sleep over this stuff. I find it both disturbing and delightful. I'd love to share photos of the white board with you but he has asked me not to release spoilers.

He finished his first skit the other day and it would mean the world to him if you'd watch it and like or subscribe to his channel. I shared it on my personal Facebook and he has been buzzing over the numerous likes and encouraging comments.

I will keep you posted on his progress (and on the future of those pricey puppets.)

I hope he grows up to be the happiest puppeteer who ever lived.
Posted by Ashley

That video was great. He's very creative and inspiring. I'm glad he's pursuing his passions; Jim Henson would be proud. Way to be supportive, even if it's not your vision. Apparently, I'm feeling pep talky today. Go team happiness.

What about having him modify the expensive puppets? The construction of those is probably top notch so maybe deface them and have him... re-face them?

The video is really cute <3 Good on him and if he ends up being the next Jim Henson I suspect that he's going to be super happy :)

These are the kinds of minds we need WAY more of! <3 I'm a hairstylist(amongst other things) and I remember one of my very first clients was a puppeteer. I thought he was way weird because he would't look at me the whole time I cut his hair- he talked into his shirt the whole time- then I went online to look at the puppets he made, and I immediately fell in love. I never saw him again but he went from majorly bizarre to dreamy within one google search. I was art undergrad so I believe puppeteers are to art gals what boys in bands are to the rest of the world- cool artsy daughter-in-law in your future plus witnessing this cuteness daily? win/win :)