The Art of Being Bold 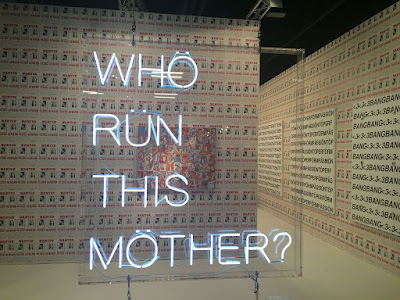 When SheKnows Media invited me to Art Basel to cover an event at the Vanity Fair Social Club, I was instantly intrigued but thought maybe there had been a mistake and they didn’t actually mean me.

Attending Art Basel in Miami Beach has been a long-time dream of mine. It's a world famous art fair that attracts celebrities and media and rich people and other oddballs from all over. I had a brief love affair with Miami Beach in my late teens/early 20s and always envisioned this glamorous, sunny, culture-filled weekend as the grown-up version of my exotic life.

In case you hadn't guessed, that didn't end up being the grown-up version of my life. I had kids and a messy house and a lack of abundance in my bank account instead.

I thought maybe it just wasn’t meant to be this year again either. I reached out to a few friends and family members, mostly looking to justify how impossibly difficult it would all be, and each and every one said that I had to go and offered to help however they could.

I messaged a former co-worker and teammate of mine who lived over there, someone I had never met in person and hadn't worked with for long but who I really liked, and she said her mother-in-law just moved out of a condo and that I could stay in it. It was within walking distance of everywhere I needed to be. This seemed like an unbelievable stroke of serendipity.

But I would need to buy a new outfit…and then I found a dress for $12 at an upscale consignment store. It was the first one I tried on. Could I wear a $12 dress to a Vanity Fair event, though? I mean, the plan was not to tell anyone it was a $12 dress but now I'm telling the whole internet so I kind of blew that.

I finally ran out of excuses not to go, so I went.

It was pouring the whole way over and I kept wondering if I would die in Miami traffic and then I said, "Ashley, you have been driving for 21 years, you will be fine, shut the hell up." Realizing that my driver's license is old enough to drink was a sobering thought. (I didn’t die.)

I finally arrived and I met my beautiful new friend. It felt like we had known each other forever and we stood there chattering until her husband had to insist that it was time to go because we wouldn't have parted willingly any time soon.

Guys, this was my view: 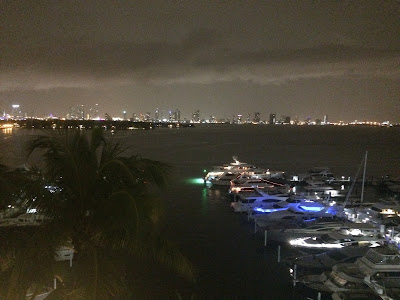 My plan had been to explore the city alone to enjoy the people watching but I ended up getting a bottle of wine and staying in instead; watching yacht parties in the bay and the cars crossing the bridge.  It was the most exciting night I’ve had in a long time — sitting there by myself, thinking or not, feeling like a tiny part of something bigger instead of in on the action.

While I was there, I realized that I was in the same building I had stayed in for my childhood best friend’s bachelorette party and it seemed like maybe I was the sort of grown-up I wanted to be after all. Kind of.

The next day I had an Uber driver take me to my event. He asked what I did for a living and when I explained that I was a writer, he insisted that I would make a great anchorwoman. I debated him on this for a minute but he was so certain that I could be excellent with a little practice that I thanked him for his confidence in me.

After getting his life story, I asked if he had plans to return to Jamaica and he said that his good friend just received a license to grow medical marijuana and they were going to be partners.

When I arrived at the Wolfsonian, I wanted to take a picture of the fancy Vanity Fair doors but didn’t want to look like a total weirdo so I strolled on in like I always hang out at places like this.

After getting checked in, I went to the bathroom and realized the rainy Miami humidity had done its own part in making me look like a weirdo. I had my picture taken at a fun little photo wall and once I finished, a guy in a suit pulled me aside. “Ma’am, may I speak with you for a minute?”

I thought they had checked my Twitter and realized that I was a mommy blogger who had dyed her hands blue two days before and were planning to escort me out.

“Can we take a few shots of you over here?”

“Shots of me?” I asked, not understanding.

I thought it was their social media team and reluctantly obliged, and then there was a whole light and camera set up and they took a lot of pictures of me trying on old-fashioned hats.

I don’t know, maybe they were getting some clear photos for the “no admittance” list next time, but there was another girl with me and she looked legit, so I’m still not sure what was going on. When I was leaving I asked what it was for and the photographer casually replied that it was for Vanity Fair, and then I needed two mimosas.

In groups of four they took us into an IMAX-like screen area with a Lincoln MKX parked inside to show off the Revel speakers along with a visual show and it felt like a Disney World ride (on drugs).

The panel of speakers I was there to hear included Jory Des Jardins, co-founder of BlogHer, Jessica Teves, editor of Stylecaster, and Yael Alkalay from Red Flower, and was called Style (and Power) to the People. This inadvertently ended up being the luckiest part of my weekend. 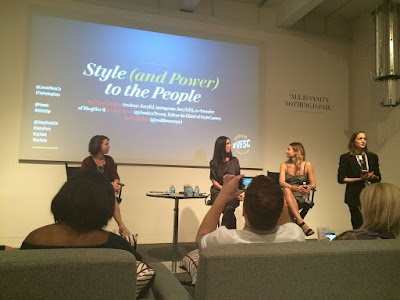 I struggle all of the time about what the heck it is we are doing here (and by here, I mean Ashley Quite Frankly, and by we I mean you). I feel guilty for not being more professional or “building my brand” or looking for ways to monetize or even posting more regularly. Then I remember that I started this for fun and that it's more for me and my family than the rest of the world. It’s strange enough to share our lives with you — it would be even weirder to think of our family as a brand.

I’m a writer. I do that here for fun (or therapy) and elsewhere for work. I see the world through words, and when I’m here, I’m writing my own story. If something fits in along the way (I’m looking at you, Netflix), or a professional opportunity arises as a result, great! But I have this one little corner of the world where I get to tell my own story and I’m going to do it in my own unpolished way, unapologetically, in my own voice.

Anyway, I realized all of that after the panel. They were discussing the importance of authenticity, story-telling, and approachability. It made me realize there was value in my messy life and my willingness to admit it — that the kind of people I would like to write for won’t necessarily exclude me for my $12 dress and stained blue hands. I felt better for not having, or wanting, 500,000 followers and a creative director.

That probably wasn’t the point of the panel, but you know how I have a tendency to make everything about me. 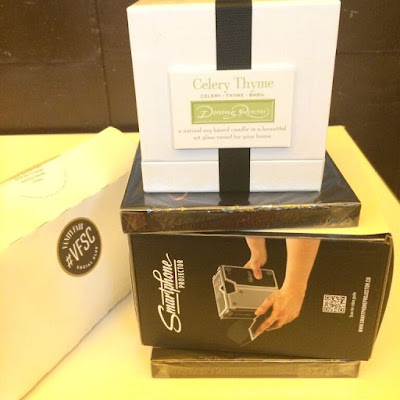 Later I had my makeup done by Sisley and as I was finishing up (with a mountain of swag, which made me feel like a movie star), I got a text from a friend lamenting the fact that her camping trip was canceled and she could have come with me after all.

She said it would be late and she had nothing to wear and it would be expensive and that there was the driving and the tolls.

“When else will you have the opportunity? #BeBold,” I texted back in our inspirational yoga hashtag speak, after breaking down the limited costs. I didn’t think she would come. This was very last minute and she has 17 kids (or 4, same difference.)

And she did. We went to the actual Art Basel, which was 500,000 square feet, and we had deep conversations and laughed at penis statues and high-fived about how bold we were and somehow avoided any hint of a stabbing that happened in the building at that time. 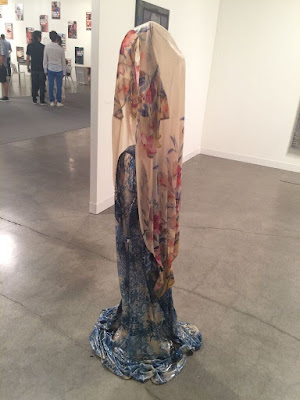 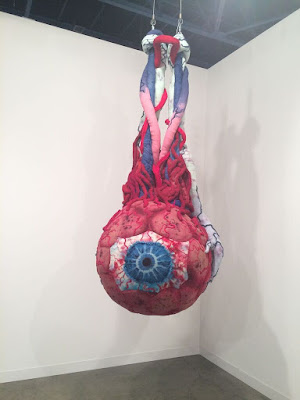 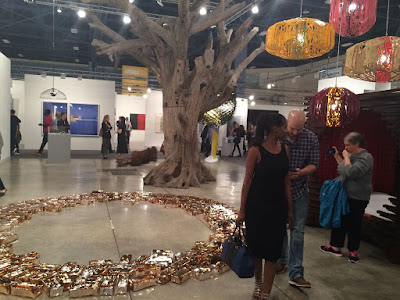 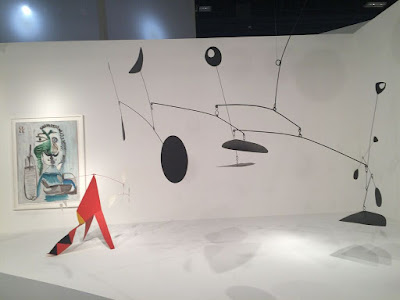 We also ate at a pizza place, told an Uber driver/aviation mechanic student that his mom must be proud of him, drank wine and had chocolate from Nespresso and talked until late in the night on the balcony while watching the city lights flash.

We had so much fun trying on this other life where we were just us for the sake of being us, no kids attached. 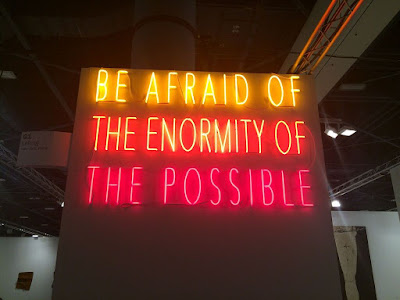 The next day we went to IKEA and I only spent $22; one of my life’s greatest accomplishments.

Although not as wild and exciting as my old Miami days, it was the perfect, almost glamorous weekend of being the kind of adult that I want to be.

(Except for the bad hair.)
Posted by Ashley

How fun and exciting and scary! I'm glad your friend was able to come too. I guess adulting isn't always terrible.

This sounds so fun even if I have next to zero interest in art. I do dig that eyeball, so maybe I'm more contemporary than anything. And I will say that I personally appreciate your authenticity and lack of desire to please others. It always shows through in others and no one (at least no one I like) likes a fake person.