I need you all to stop what you are doing and go watch Finders Keepers on Netflix immediately.

I know, I know -- your boss might be mad and people in traffic may not understand but this is urgent.

It's a documentary about a guy who buys a storage unit's contents and finds a human leg in a smoker that was left inside.

It turns out that the original owner of the storage unit is an amputee and for some bizarre reason, he was allowed to keep his leg after removal. He wanted it back but the leg finder enjoyed the attention it brought him and had parlayed it into some fame, and wouldn't return it.

The journey that follows is absurd and funny and frustrating and sweet; one of those meant to be situations that brings people together who need each other to fulfill their destiny (even if they don't like it) and proof that the universe has a plan.

I even ended up feeling a strange sense of admiration and sympathy for the weirdo who wanted to keep some other weirdo's leg. Talk about living boldly and making opportunities appear.

I hope everyone involved, and the leg, lived happily ever after the end of the movie because the world needs more characters and people who are passionate...even if it's about weird shit like someone else's rotting leg. 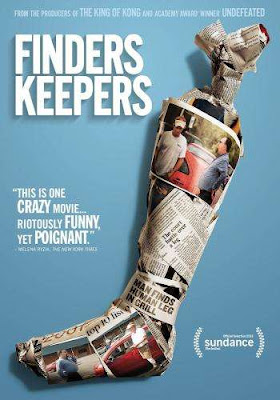 I'm a member of the Netflix Stream Team and Google wants you to know that I get free Netflix. I want you to know too, because it's pretty cool and makes me feel special. It doesn't influence my opinions on various documentaries and/or weirdos though.
Posted by Ashley