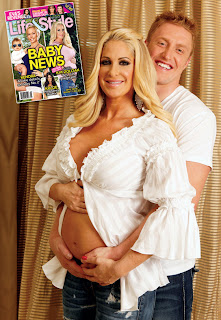 We went without cable (or satellite) from March to December. It was fine. No one cared, thanks to Netflix streaming on the Wii. There were a few awkward moments when the outside world would be discussing a movie or commercial or new show and I had no idea what they were talking about, but I really didn't care.
Then we found out we could have basic cable for $10 a month for the next 12 months and figured we'd have it hooked up--and so we were sucked right back into the world of television.
I can already tell my IQ has dropped at least 20 points. God, why do I care that this transvestite is having a baby?
I'm addicted to the entire Real Housewives franchise but  Real Housewives of Beverly Hills is my favorite. I sit completely transfixed watching and waiting for any sign of life in Camille Grammer's forehead. 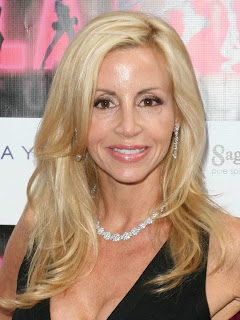 (There is none.)
I don't blame Kelsey Grammer for needing a drink or twenty to put up with her. The judge should only have to watch one episode before granting him a speedy divorce. I'm 100% Team Kyle. Camille is insecure and impossible to deal with.
I really want to be Lisa when I grow up. Or at least her permanent houseguest. She can cook, she dresses beautifully, she can arrange flowers, she runs successful businesses, she's gorgeous, she talks pretty, and she handles social situations with grace, class and humor. She's completely unlike all of the rest of those overly botoxed Beverly Hillbillies. I think her and Kyle would actually be enjoyable to be around. Possibly. 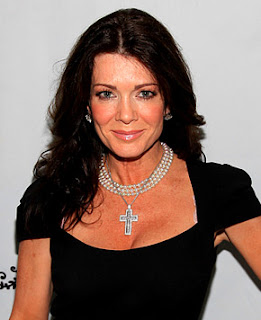 I am anxiously awaiting the return of the New York housewives, the Jersey housewives scare me (bitches be crazy!) and the Atlanta housewives make the South look bad. I do like Nene though.

The entire series is proof that money can't buy you class, happiness or good plastic surgery!
Posted by Unknown

Email ThisBlogThis!Share to TwitterShare to FacebookShare to Pinterest
Labels: perma-duckface

I really want to judge you but one time I watched an entire season of Jersey Shore so...yeah.

Im all about the Housewives. Its an illness

I'm team Klye as well!! Camille is a nutcase!

I hate, hate, hate me some Camille! Do you read www.imbringingbloggingback.com? His recaps are awesome.

I am shamelessly addicted too! And guess what?! My friend and I are seeing Bethenny speak next week! (I kinda just want to see her hot husband tho.)

I just read in the rags yesterday that now that Camille is divorced she might not do the next season; she's a single mother now you know O_o... with those four nannies, personal chef and cheauffers. SUCH. a nutjob.

TEAM KYLE! Kyle's only fault is that she so badly wants to make things right but with Camille and her e-cig smoking crazy friends it's just never going to happen.

I cannot be team anyone because they are all horrible, horrible people! I can't stop watching- it makes me feel so normal and sane! haha!
Nicole

Camille probably isn't doing next season because she's coming to the realization that she looks totally NUTSO in this one. I *almost* feel bad for her but she's just such a jerk. Kyle's done all she can. Her husband is hot, by the way.

Sarah, what is Bethenny speaking on? I don't mind her, she's probably the only NY housewife I would consider hanging out with but only in short doses.

I feel envious when I see their closets but otherwise, they're all messes (except for Lisa). They don't make it look like fun.

The pregnant dude looks like Kim from RH of Atlanta