This Little Light of Mine

This is my little Palm Sunday boy. 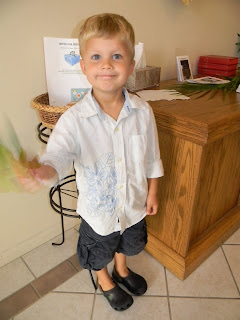 He totally rocked "This Little Light of Mine" and something that went like "Ho-ho-ho-ho-sanna" but I have no idea what else they were saying.

When I told his teacher on Friday that I was looking forward to it, she had mentioned that little kid was one of their best singers and that they put him front and center to feature his talents. She said this with all seriousness. Based on what I had seen of the performance at home, this was a cause for concern.

But he was happy but serious up there, cute as can be, loud and proud, shoulders back and looking straight ahead, waving his little palm frond and holding up his little finger candle. It was pretty precious.

I laughed and was full of pride but didn't cry. Maybe because he's still little (getting big, but there's a good chance he'll voluntarily be my baby for the next 26 years or so). Maybe because it was short. Maybe because we sat next to a crabby old lady who kept giving Big Kid the stink eye for daring to exist. Quite possibly because the pastor kept calling us all terrible sinners. And I agree--I AM a terrible sinner. But reminding me of that fact frequently is not the best way to get me to volunteer my Sundays to hang out with you.

Dude was all doom and gloom and smugness and spoke in a monotone voice. He accused everyone there of worshiping the false gods (with a lowercase g, he clarified) of computers and smart phones and drugs and coffee and alcohol and sex. Awesome of you to equate coffee, cell phones and computers with drugs and alcohol and sex, Pastor; between you and the DARE program I will never get a guilt-free trip to Starbucks in this house ever again. I'd also rather he hadn't said the word "sex" 8-9 times in front of a congregation full of preschoolers, little kid has no idea any such thing exists and I was trying to keep it that way for a while. But thanks for introducing the topic on Palm Sunday after his performance of "This Little Light of Mine".

We snuck out during Communion after he told us we'd go to hell if we accepted it without truly believing and that he'd like to speak to everyone who chooses not to accept it after the service. Yeah. No thanks. I've had enough. Out in the parking lot we found the other preschool parents who all pretty much agreed we'd be seeing each other in hell by his definition. Him and his congregation of 47 (seriously, that was last week's attendance at the 11am service) are going to be awfully lonely up there in their version of heaven.

He did this at the Nativity service too--spent the entire time telling us how the only time his church was ever packed was Christmas Eve and how he didn't want to hear how we all worked hard 5 days a week and wanted to spend time with our families on the weekend because church was a perfectly fine place to spend time with your family.

And you know, I don't even really disagree with that message, just the timing and delivery. Here you have a whole audience of misty eyed preschool parents who may not regularly attend church, here's your chance to get their attention, and you spend the whole time insulting them for the times they haven't come or because they like their iPhone?  The reason his church is never packed is because he's condescending and rude instead of warm and loving. People like him make other people scared of God.

I just wish he would have actually discussed Jesus and Palm Sunday and let this little light of mine shine a little brighter a little longer. 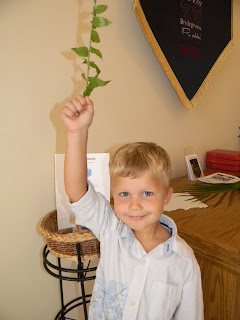 Because if that's not proof of a higher power, I don't know what is.
Posted by Unknown

Email ThisBlogThis!Share to TwitterShare to FacebookShare to Pinterest
Labels: signed a terrible sinner

You must read this website, you are a sinner if you drink coffee over there too:
http://objectiveministries.org/kidz/

Yikes. One of the big huuuge reason why we do not attend organized religion.

Sorry you had to go through that.

So did Little Kid ask you about sex afterward?

Oh hell...I'm totally doomed. Between my Diet Mtn Dew addiction and the IV of coffee I keep strapped to me...I'm done.

We call our priest Eeyore. It's a good thing they have a lot of guest priests at our church. Imagine Eeyore saying "The body of Christ" over and over as people go up for communion. Kerry

I'm a Christian who goes to church every single week. I agree with every word you said.

P.S. and by the way: Your boys are more adorable with each photo you post!

Argggh! I hate ministers like that!! Makes me want to just slap them! I was told back in high school by my friend's mother that I was going to hell for going to prom with a guy who wasn't of my race. If heaven is full of people like that, I think I'd rather be in hell, thank you very much!

Good grief, what kind of church is this? I haven't heard the coffee no-no since my Mormon days and I thought they were the only ones that didn't drink coffee, as we like to say, like "normal people."

Can I get a hallelujah!? I totally agree with you. As a good Christian girl, I grew up Lutheran and I have never experienced anything like what you are talking about outside of a Southern Baptist church. My Lutherans are usually quite lovely and accepting. I vote for trying another of my people's houses and giving them another shot. Methodists are quite laid back and dedicated to discussing the holiday at hand rather than brow beating you for liking to talk on the phone and drink coffee. Your dude is a nut farmer who obviously enjoys his $200 a year budget and his 11 dedicated members because it allows him full access to hearing his own voice echo off the vacant walls.

Sorry the pastor was a freak. :( I agree with you. Completely inappropriate and I would have been angry to hear that sermon with my little ones next to me. Way to woo new members, loser.

Oh, and my church has a coffee shop in it. LOL!