An Elf of a Time

Well, as is our annual tradition, I have fallen far behind on the Harold Hubert Piggybottom posts. It wasn't a very elftastic week in general though.

The morning after Harold arrived, we found him resting in the nativity: 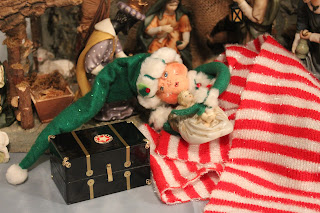 He was snuggling the baby Jesus, and he had a tiny traveling trunk with him! We opened it, because we didn't think he would mind. 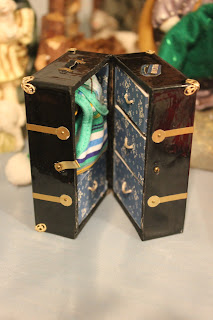 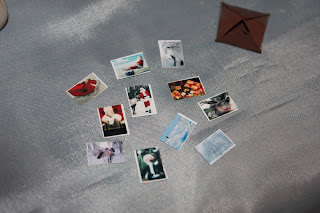 It contained a tank top, a tiny rubber credit card, and a little envelope full of little pictures! I was amazed by the photos. The boys gave them a cursory glance. little kid was more interested in the logistics of using the credit card.

The next day we found him enjoying the Florida experience. And wasting food. He was wearing a straw fedora, glasses, jean shorts and the tank top, and floating in a pool of marshmallows on top of a bagel. 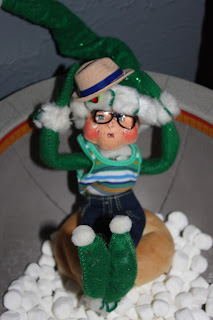 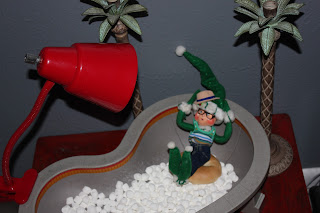 Big Kid was annoyed because that's his reading lamp. little kid was interested in the pool, which even had a drain. little kid was also disappointed by the lack of naughtiness.

The next morning was quite a surprise: 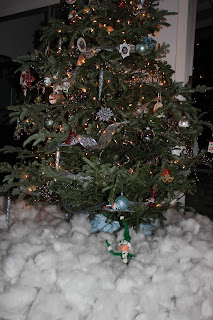 The tree was surrounded with fluffy stuff! 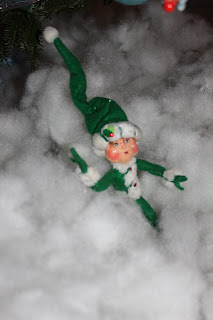 The cat appreciated this the most. Big Kid said maybe he should just sit on a shelf from now on, and I agreed. 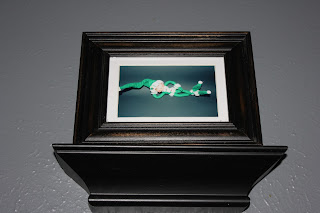 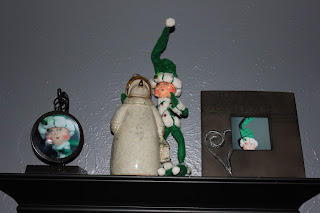 The next morning he was on the shelf, but he replaced all of our family photos with Zoolander-like photos of himself. Weirdo. Big Kid wants me to replace the family photos pronto. I still haven't done it, and it is rather creepy. 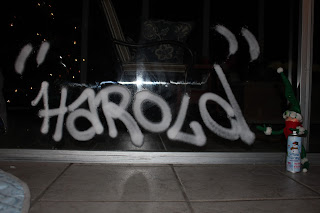 Then Harold tagged the sliding glass doors with snow spray. Not cool because that's my most hated chore, as you can see by the flash reflecting off of the streaks on the glass. Then I decided to be fun mom and let the kids spray the windows with the leftover spray, which was a gigantic mess. little kid miraculously managed to make snow balls with an aerosol spray--Florida kids will go to great lengths.

Big Kid refused to do it at first and I asked why.

"If I graffiti something, it's going to be for real," rule-abiding, property-respecting Big Kid said with a sudden burst of assertiveness.

"What?" I asked, incredulous.

"What are you talking about, Big Kid? You'd be in so much trouble. You could go to jail!"

He looked slightly serious then, like he hadn't realized it was such a big offense. Then he shrugged it off. "Well...I still might do it."

What is this? I laugh out loud to imagine sweet Big Kid, who literally cannot tell a lie (boy's got no poker face) spraying gang signs somewhere, but am also fearing for whatever kind of nonsense the next phase of life may bring. So...maybe elf graffiti wasn't the best idea. I guess. Thanks, Harold. 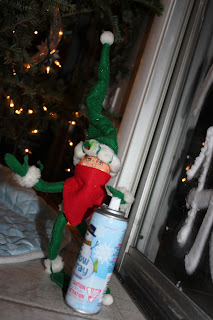 But the next day he brought Coca-cola, which is my favorite. He was even drinking his own itty bitty coke, much to little kid's amazement. We were slightly worried if caffeine was counted in the energy drink warning we received from the North Pole, but the can appeared empty, so what could we do? 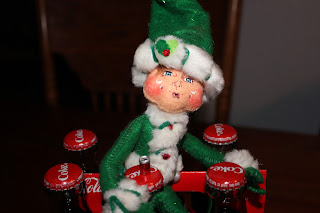 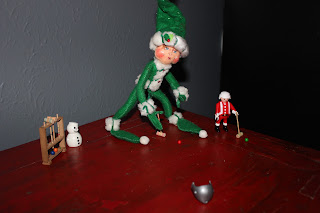 This was very cute and not messy. little kid hopes we get to keep his croquet set. I am glad Harold has calmed down. 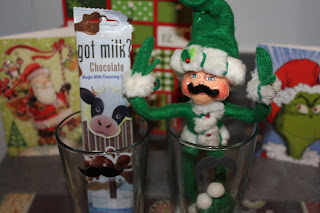 Then he grew a mustache and brought mustache glasses and chocolate milk straws! He also attached vinyl mustaches to various photos: 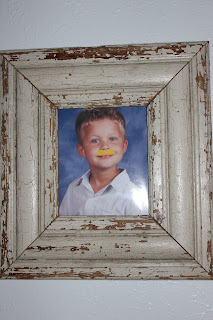 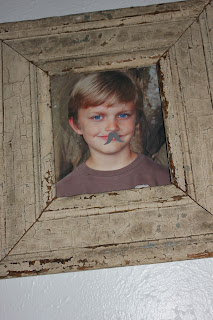 I thought it was funny. 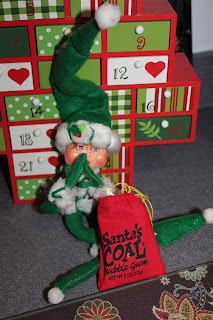 The next day he brought Santa's Coal bubble gum, which really tasted like coal, according to little kid. Not sure when little kid has eaten coal, but I believe him. 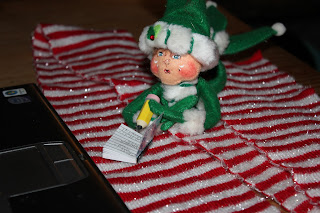 Then we found him in front of the computer the next morning, watching video reports from Santa for both boys. He had a small notebook and he had written both their names with "Nice!" next to them, which was a big relief around here. People admitted to being slightly worried about yesterday's coal gum. He had also written "Redbull- Naughty!" so we think he learned his lesson. 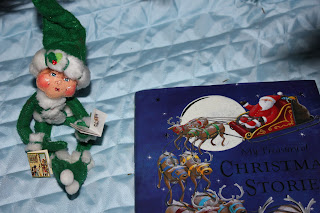 This morning we found him under the tree with a book of Christmas stories and two tiny Christmas books of his own. Everyone appreciates books around here, and they were grateful to get a new one. I am grateful that all is calm on the elf front and am glad it's a shorter visit this year.

Phew, I am also glad to be caught up on that! This may be a record in falling behind.
Posted by Unknown

Awesome! I love Harold. Kept wondering where you found all that tiny stuff (especially the cricket set - kinda cool). You sure are one cool, frightfully creative mom!

I'm giggling with joy over your clever ideas. SO awesome!

Merry Christmas to you and your family Ashley! Your blog is a gift that I enjoy all year!

Yes, please tell us where you found all of the little stuff! So cool!

I don't know where he gets the little stuff, it wasn't even all in his trunk!

He left it all behind and I'm excited because it will fit in my dollhouse, so there's at least one benefit of having a house elf.