I can't believe it's been over 2 weeks since I've posted. I thought I've been doing pretty well, all things considered, but I'm just now starting to see the broken bits and pieces of things I have neglected or forgotten.

It's like waking up after a huge party--slightly fuzzy, ill and disoriented, trying to figure out whose house you're in and why it's such a mess. And then realizing it's your house. And remembering that the party wasn't fun at all.

And you still have to clean it all up.

I slept for that one week, which was amazing. It's like my brain knew we had to have space between everything that happened and the rest of real life and it threw the emergency shut-off switch. The next week was hard though. I felt emotionally raw and my normal daily tasks felt impossible. People would complain about random things, minor complaints, valid complaints, and it was hard not to scream, "THIS IS NOT IMPORTANT!! I can assure you that it's not! I now know what is important and this. is. not. it!" But I would smile and nod and agree that yes, this was a problem and offer my sympathy or solution. I varied between wanting to blurt out what I had been through and also constantly trying to protect people from it.

No, I wasn't here last week. No, I didn't go on the retreat. No, the kids weren't on spring break. No, I wasn't away on vacation. Aw, that's nice that you missed me, I missed everyone. Yes, I haven't been here for two weeks, it has been a while. Where was I? My dad died. (Boom!) Yeah, it was sad. It sucked. I'm glad to be back.

I tried to protect you, sweet people who care about me but aren't necessarily in the know. I tried to save you from that, "Ah, fuck," feeling that would wash over your face when we finally got there, when I could save you no more. But you had to know. And I don't mean that in a snarky, wish-you'd-not-asked kind of way, I mean that these people noticed my absence, missed me, and have an interest in my life. It is a good thing. It is a fortunate thing. It was a difficult thing.

I cried hot, quiet, trailing tears every time I closed my eyes in yoga class. I had to remind myself to make normal people faces when working. I pretty much only ate applesauce in squeeze packs and little discs of cheese and the small offerings of coke and candy Mr. Ashley continued to bring. I stopped sleeping at night.

And one night, when I was in that odd space between asleep and awake, where you can feel the room around you but you aren't fully mentally there, my dad pulled up a seat next to me. A cooler, more specifically, which is weird but actually not that weird at all if you know my dad. I was so excited to see him, so thrilled to hear what he was going to say to me because I could tell he was about to talk...that I woke up.

Ugh. I woke up. Woke up! How could I have woken up?

Why do opportunities have to be so damned tricky in the first place? Slippery bastards.

My mom asked what color the cooler was and I told her it was red. She told me that his work cooler, from his job as a medical courier (a job that he loved with an odd intensity, a job that kept him alive) was red. If you can do whatever you want in the afterlife, he is probably still doing that. My dad, medical courier of the afterlife.

I spent all of that night and many of the next trying to get to that in-between place of awake and asleep. The result was a cessation of sleep after a full week of overdosing on it.

We had a memorial dinner for him and sprinkled his ashes off of our city's pier. We walked its length under the cover of darkness, to perform a beautiful, dreadful, not-quite-legal chore. We grouped up in a corner and waited for my dear husband to retrieve my phone from our far parked car, so we could have music. While we waited, my mom commented that it would be nice if there were dolphins and my brother and I leaned against the pier's railing and laughed at the seemingly outlandish request.

"Yeah, really, dad...we couldn't get some dolphins? You couldn't send us a freaking porpoise? I mean, what else is he doing that he can't arrange for a fleet of dolphins to greet us?" As our chuckles died down I heard a commotion below us and looked down to see...a dolphin. Not just swimming by quietly as dolphins usually do, but breathing noisily and splashing directly beneath us for a moment, long enough for us to see its blowhole sink back under the water as it swam away.

It was pretty impressive. It still feels slightly impossible. My mom managed to miss it entirely.

We played the songs he passed to, Ralph Stanley's "Swing Low, Sweet Chariot" and "My God is Real" by Krishna Das while we quickly and quietly sent my dad on his final journey, away on the current of the Gulf of Mexico.

A small group of fishermen and tourists remained with us at a respectful distance, observing us
and listening to the music. As my husband struggled with lighting the sky lanterns we had brought, one of them stepped forward.

He joined our small group without further hesitation, helping to hold the lantern while it filled with hot air, lifting it to catch the breeze and float away. We all watched in silence, the whole end of the pier watching the ascent of the lantern, as "Let it Be" echoed around us. It was beautiful and perfect and painful, like life. The kids cried while the adults sat in tired, overwhelmed, peaceful, lovely silence.


little kid went home and drew a picture of the pier and of the moon reflecting off of the water.

It says, "Sadly, gramps died from long cancer. We threw flowers on the water and lit lanterns for him."

It broke my already broken heart with its sweetness. 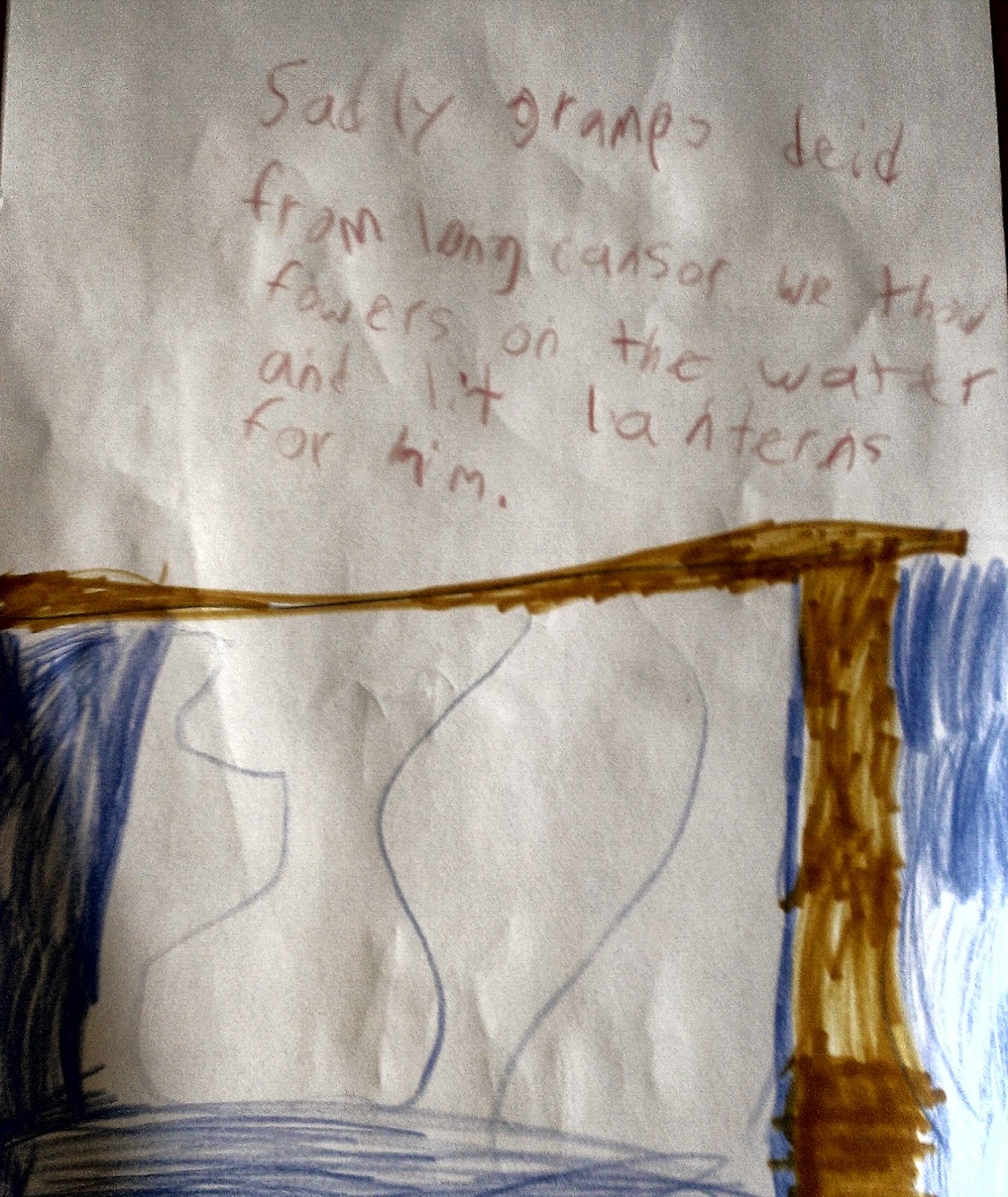 We went camping in the Keys last weekend, a trip we had planned before everything happened and one I was dreading since everything happened. I am usually the packer and preparer and did a solid C- job at it this time. It was exactly what I needed, though -- the sun, salt, family and play. The time to think and talk and nap and work and play and be a real person who was physically away from it all.

So despite the fact that this will never truly end for me, I feel safe to say that I'm enough in the land of the living to not only pass for, but to truly count as, a real person again. I am picking up the broken bits and pieces and cleaning up. I'm finding things funny and people easy and work enjoyable. I am awake. I am doing the laundry. Things are getting back to normal even though they'll always be (and I'll always be) different now.
Posted by Ashley

Email ThisBlogThis!Share to TwitterShare to FacebookShare to Pinterest
Labels: back to a new normal

Oh, I had shivers reading about the dolphin. Did you read the thread on BBC about experiences like that with loved ones? It was enough to give a person some hope. My mom has dreams like yours about her mom, who died relatively young and suddenly in a car accident. She sees her in a crowd, across a room, on a bus driving away, etc. and she can't get to her. I'm glad you had some healing time with your family. Peace be with you!

How amazing about the dolphin. I would like to think your dad made a big commotion just for you and your brother <3

Time to begin your new normal :)

I suck at comments. But I'll say that I'm glad you're making your way back. In that weird I-read-your-blog-and-care-about-you-because-I-kind-of-feel-like-I-know-you way, I've been worried about you.

I love your bog and your writing and you! I have read your blog for years but I don't think I've ever commented; your stories make me laugh out loud and some make me cry. You've been in my thoughts lately. For as hellish as its been the last few weeks, you will get through this pain and to an extent, some of it will slowly lift away.

"It was beautiful and perfect and painful, like life." Truer words were never written. Thanks for sharing this. And no, your life will never be the same, but you'll get a new normal. The life "after" is different, but it's a life still. Sending you hugs.

What Trilby C said. Exactly. Missed your view of life, sucky parts and all. I lost my mom to long cancer too and still miss her 30 years later. Love and hugs Ashley.

The dolphin! What?! Thank you for letting us know how you're doing, Ashley. xo

Oh Ashley, my heart breaks for you. I lost my dad last August after a six month illness and it still hurts every single day. Some days I wish I could go back to right after it happened when it was perfectly acceptable to close ourselves off from the world and pretend the outside world didn't matter. Living life while grieving is hard. The signs from above help but nothing completely takes away the sorrow. Many many hugs to you.