Unbreakable: Win a Year's Worth of Netflix

Motherhood is a lot like a cult at first. There's so much allure in the beginning-- the sense that you're contributing to the world in a great way, the hope of being an integral part of something bigger, the promise of a new community and sense of perspective of which only members of the club have access and, of course, the cherubic, big-eyed, velvety-soft, sweet-smelling exclusive club card that is essentially your key to all of the above.

You drink the Kool-aid (or more likely, the breast milk, during late night confusion, curiosity, or flat-out craziness) and participate in intensely reverent conversations about diaper brands and growth statistics with people who you would never have chosen to socialize with if not for being VIP members of the same club.

Is it rewarding? Of course it is. (At some point in the future, after the age of three.) But people recruiting parenting converts very rarely start their pitch with a promise that you'll get poop on your hands and feel ostracized at club meetings (also known as play groups and/or the seventh circle of hell). If there was a glossy brochure, the promise that you'll smell faintly of vomit for several months wouldn't be in the member benefits section.

But eventually, sometime soon after preschool, you stagger out of the early childhood fundamentalist cult. Maybe you put on your least dorky clothes and venture out in an attempt to reconcile the old you with the new you. Perhaps, like Kimmy Schmidt, you end up in a nightclub where someone asks if you like Molly and you enthusiastically answer: "Do I?! She's my favorite American Girl doll!"

You set out to find yourself. You seek out friends of your choosing. You figure out that Molly is a drug and wish you could take some to forget the cringe you feel when reliving your social gaffes. You are unbreakable.

As a member of the Netflix Stream Team, I was fortunate enough to get an advanced screening of Tina Fey's new show, Unbreakable Kimmy Schmidt. (Yes, I'm bragging. It even had my name watermarked over it -- I know that's so I couldn't illegally distribute it but it still felt super glamorous and fancy pants to me.) 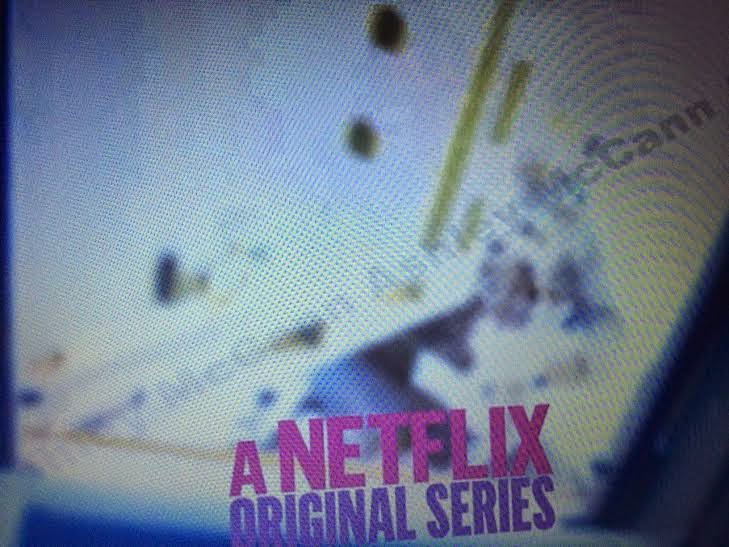 During the first episode I laughed while inwardly cringing at what seemed like over-the-top ridiculousness and the naïveté of Kimmy Schmidt. I particularly love Jane Krakowski's character, a posh mediocre mom who at one point told her son, "Actually, Buckley this is not your worst birthday ever. Your worst birthday ever was when you busted my genitals."

But the more I watched, the more I sensed a side of Kimmy Schmidt that I could relate to: the one struggling to discover who she is while trying to recover from the adversities of daily life; the one promising herself that she could do anything for 10 seconds. She is silly and absurd and sweet and awkward and resilient. Like you and me.

But I hope you don't wear light-up shoes like she does.

So leave a comment here about your unbreakable moment. Feel free to take creative liberty with what that means -- the winner will be chosen at random so I'm not looking for the next Hemingway of short stories.

For example, one of mine would be:

Due to an odd reaction to drugs, I thought I was on a boat during one of my labors and tried (hard) to trade my soon-to-be baby to a nurse in exchange for safe and immediate passage back to unmoving land. No deal. #Unbreakable #KimmySchmidt

Just like Kimmy Schmidt, I've been taking life 10 seconds at a time for the last 12 years or so. Maybe more, but I can barely remember what the old me was like and maybe that's a good thing because the new me is really growing on me. So, join me in sharing your unbreakable tales and definitely watch Unbreakable Kimmy Schmidt on Netflix starting March 6th.


You have to watch at least three episodes because I said so. It's not a condition of the contest or anything, it would just be great if someone would listen to me for once. 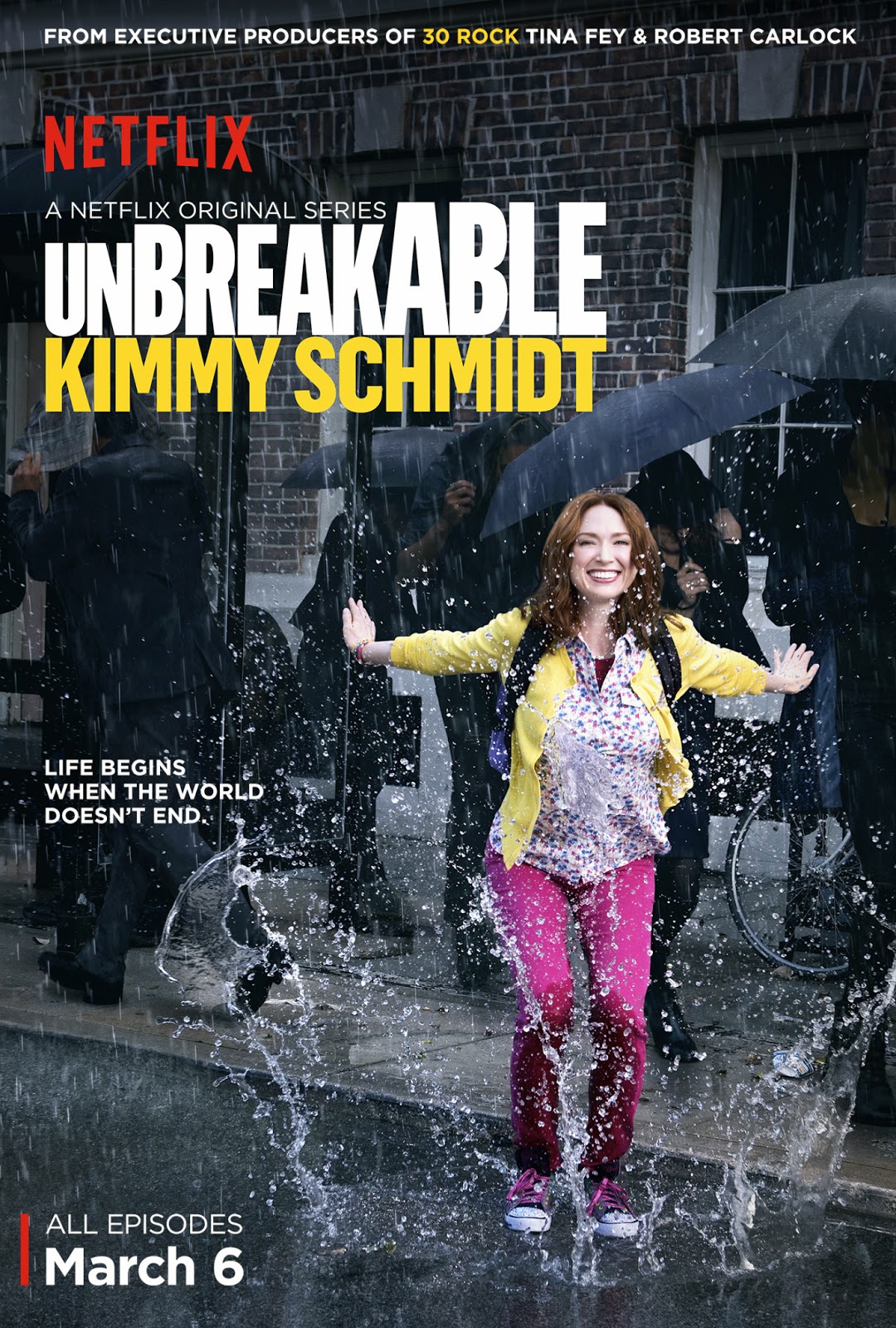 THE WINNER HAS BEEN CHOSEN AT RANDOM BY RAFFLECOPTER AND NOTIFIED BY EMAIL. THANKS TO EVERYONE WHO PARTICIPATED! I LOVED HEARING YOUR UNBREAKABLE MOMENTS AND AM HONORED THAT YOU SHARED THEM WITH ME.
Posted by Ashley

My first night out after having my daughter, I foolishly consumed one too many martinis (that would be two) and hit what I thought was the dance floor. It was really just where they were moving two tables together. There also wasn't any dance music. My darling husband ushered me in all my glory quickly out of there.

Finding out I have congestive heart failure was an unbreakable moment for me.

One time I was at a dentist appointment with my five year old, which would typically be a terrible experience, but the was compounded by the fact that he has epilepsy. He had about 30 seizures in the dentist chair that day, but we survived & left ok after a 3 hour dental vsiot just for a teeth cleaning. Feeling happy with myself that that moment of hell was over I went to check my emails and figured out that I had missed a swim meet of my older child. How did I figure this out you ask? Well "Swim team Mom" had sent a REPLY ALL email about me to all 80 of the swim team families about how "inconsiderate" I was & how I "ruined her evening by the pool because she had to realign the relays"...Yes she did. Well, I went home, had a couple beers and sent a "reply all" right back to her. telling her to "get off her high horse!" LOL! It was pretty awesome. We are in a small town & I am friends with "swim team mom" now, by the way!I am unbreakable...kind of.

Having to cut gluten out of my diet entirely was one of those moments- I was scared to death about what in the world I'd find to eat and figured I would lose 20 pounds (which would be amazing!). However, I have somewhere found the right GF foods to eat to not only *not* lose 20 pounds, but gain another 15.

Having to cut gluten out of my diet entirely was one of those moments- I was scared to death about what in the world I'd find to eat and figured I would lose 20 pounds (which would be amazing!). However, I have somewhere found the right GF foods to eat to not only *not* lose 20 pounds, but gain another 15.

My unbreakable moment was when I was the pastor of a small church.
I walked into a meeting of 5 ladies that had decided they were done with me, and to hell with the rules of our denomination (I also got in trouble for saying Hell...) I handed in my resignation knowing they would not be satisfied until I did and I never breathed a word of that meeting to the rest of the congregation that never had any idea that I was being forced out. I went from a very overly idealistic minister to a hearbroken and burnt out one in record time. People suck sometimes :P

I had a mini panic attack today when I lost my keys. Turned out they were in the ignition of the running car I was sitting in.

My 3 year old crapped in his car seat and all over himself on a two hour car ride through the desert and I didn't have a change of clothes!! Lesson learned!! (Love your blog!)

got out of a speeding ticket by telling the police officer that my 1 year old in the car seat had a huge blowout and I was rushing to get home. The odor coming from the car confirmed as much. The actual truth was that the blowout was me - husband was deployed and I had a horrific stomach flu. I had the brilliant idea to go to CVS to try and get something to give me relief. "it's just 2 minutes away" I told myself. Ha! my colon laughed and laughed and I sharted in the car. but didn't get a ticket :)

These are wonderful, horrible and human! I love reading them! Maggie, yours made me literally laugh out loud and reminded me of the time I got pulled over and thought I was going to jail dressed as Amy Winehouse. Sonja, yours reminded me of the time I scraped poop off of my headliner with a credit card, after my 3 year begged me to cut his clothes off with safety scissors. Katie, one of my first nights out as a mom involved me getting way too drunk at my cousin's wedding--sorry to any of you who were there and may be reading. Jennifer, I love justice against sanctimommies and a happy ending. I think I got the rest of you on the FB post!

We are truly so unbreakable! Keep them coming!

Last summer, I had just finished day one of a two-day job interview when I passed out literally as we were all leaving. I woke up to my would-be boss holding my head and was made to sit down and drink some water for 15 minutes. I managed to show up the next day for part two and was greeted by all 5 people interviewing me giving me Concern Face and asking, "How are you today??" I did not get the job which is probably just as well.

When I failed my drivers test twice and past the third time.

When I had open heart surgery to get a valve replaced.

They got my order wrong at Wendy's #Unbreakable

My unbreakable Moment was when I realized my husband would never be faithful and his drug habit would go nowhere but down...I gathered my strength and left.

It won't let me post it there for some reason, so I'll try it here: I took my baby son to the emergency room with an asthma attack, and as soon as I walked into it, he vomited all over me. Violently. That was 8PM. I didn't get to wash it off until 2AM the next day, and no new shirt 'til after 6. #unbreakable

My daughter broke her collar bone and they were going to have to push it back into place. Me, the woman who passes out at even the mere thought of bones breaking, started to have a panic attack in the ER. I left her with my husband for a few and went out the car to call my own mother and freak out, crying how I have no idea how I'll ever be able to do this. After talking myself into being able to do this for my daughter's sake, I wipe away the tears and walk back into the ER... only to find out that they tried it while I was outside! My husband says it was terrible and I felt bad for not being there for her, but oh my god, I was sooooooo relieved. #Unbreakable

I was widowed at 33, thought I couldn't go on, but I've accomplished so much, own my home, done a lot of traveling and am so proud of what I've done in my life. Yes, I'm #Unbreakable!!

When I totaled my car for the 3rd time. #unbreakable