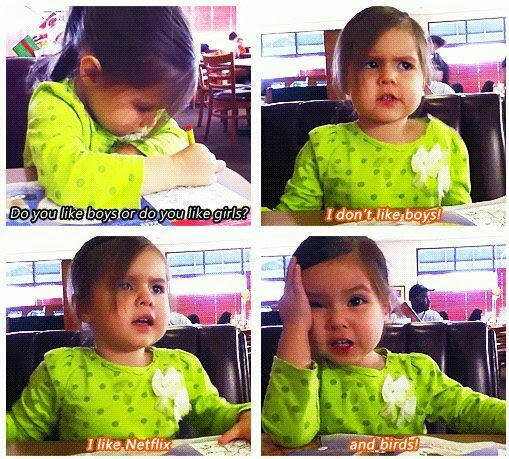 This is my soul sister, right here. I also like Netflix...I'm indifferent on birds. Birds flying around doing their own thing and being all beautiful? Love them. Loud birds in cages that will probably bite me? Not so much. Netflix never poops on me or makes a mess for me to clean up and has never done anything even remotely threatening.

I also think I prefer Netflix to boys at this stage in the game. Has Netflix left its dirty underwear on my bathroom floor? Not even once!

Last month we talked about my charming fascination with true crime and serial killers but don't worry, I'm on to something else this month: Crazy people!

Much like birds, I love watching them while they are out doing their own thing in the world and not scaring or bothering me. I mean, it sucks that they are scaring and bothering others, but it does make for great television. Is this as insensitive as my interest in murderers? Clearly. It seems a little less morbid though. A little.

Tabloid is a documentary about a beauty queen with a high IQ who kidnaps a Mormon guy. It only gets weirder from there. They interview her throughout the film and she's very charming and intelligent and obviously cunning in a way that is unsettling. I really liked it.

The Woman Who Wasn't There is about this lady who was actively involved in survivor support groups for 9/11 and had a moving tale of loss...but she wasn't there. It was so intriguing and bizarre how she inserted herself into these people's lives and stories for no reason at all.

Crazy Love features a high profile attorney and his younger mistress who had a troubled relationship--to put it mildly. The affair happened in the '50s and the documentary is filmed in a fast-paced kitschy way that I enjoyed.

Sons of Perdition -- I almost feel bad for including this one in the crazy people category so let me clarify that I'm calling the Amish people who do the shunning crazy, mostly because they'll never see this post anyway. It's about three boys who break out of the community and try to find their way in the "real" world. It was sad but interesting.

Serial Killer Culture sounds like it's about serial killers but I swear it's kind of not. It's about the weirdos who collect things from serial killers and make art about them and write them letters and seem to have an even more unhealthy interest in the subject than I do. There is some graphic content in this one (mainly brief glimpses of crime scene photos from the Manson murders), so beware.

Into the Abyss documents that last days of an inmate on death row for a triple murder in Texas. It interviews both the convicts and the family of the victims and was a fascinating look at both sides and the end result.

I swear I watch other things like Bob's Burgers and Arrested Development and I drew out the Unbreakable Kimmy Schmidt for a really long time for fear of missing her when she was gone, so please don't put me on your "crazy person" list if I'm not somehow already there.


I wrote this as a member of the Netflix Stream Team which does not influence my actions, opinions or behavior but they did send me Belgian chocolates last month so I guess you could say our relationship is getting pretty serious.
Posted by Ashley

Well shoot - like I totally needed another reason to sit and watch Netflix. THANKS ASHLEY!

As a person who watches tv mostly about serial killers- I'm going to have to branch out and watch some crazy people too. I've added these to my Netflix!

Just watched "The Woman Who Wasn't There". She's a total nutjob. Now watching "Sons of Perdition". So far it's really interesting! But, I think you meant to describe it as FLDS rather than Amish :)

Haha Megan, you are correct! I watched Shunned around the same time and they were Amish. At least I got the crazy right!