The Secret of Happy

Remember how I watched that Happy documentary on Netflix and decided to be happy full time?

Well, I only actually watched the first 10 minutes or so. And then I got interrupted.

(It's the story of my life. If I were the type of person who wanted a headstone, I'd want that headstone to say, "And then I got interrupted.")

But I was really taken with the statistic that happiness is 50% genetic, 10% situational and 40% what you do to get it. And there was a story about a poor guy who lived what looked to be a miserable life but was happy and I realized that maybe I'm kind of a lazy jerk sometimes, and then I got interrupted.

The other day I dropped little kid off and I started thinking about my 40% happy project and feeling kind of guilty even though I think I'm doing pretty well.

Not so much at the exercise part, though -- my personal record last week was a whopping 6500 steps in one day. I had a stomach virus for a few days, and I'm a writer and we don't move a lot, my foot hurts and I have a zillion excuses, but really, I think it's time to recognize that level of inactivity as impressive.

And not so much with writing for fun. You know that whole "Love what you do and you'll never work a day in your life" thing? It's true. I love work so much that it doesn't feel like work. Lately I've been fortunate to be working a lot and if it comes down to love or money, I'll pick love AND money. And naps. If it's writing for fun or naps, naps win. Every time.

I've been back to my meditation practice and that's been great but slower going than I had planned. I even signed Big Kid and I up for a Transcendental Meditation talk, which I'm pretty sure might be a cult, and we're both even more excited to go now that we suspect it might be. I am confident I'll be back into that one way or another soon-ish.

Part of my happiness project is going to be giving ALL OF THE THINGS a chance. I'm even going to a goddess/tarot party with optional belly dancing on Saturday, people.

So anyway, I was thinking about how I'm really only accomplishing the whole "hang out with your friends and do what you want" part of the happiness project and wondered if that was really so notable, even if it felt impressive to my introvert self. Then I remembered that I never did finish that movie and thought maybe I should watch the rest. Then, because I always think weird things alone in the car, I got paranoid that maybe it was a mockumentary or something so obviously ridiculous that my 40% thing isn't even worth believing, and watching it felt pretty urgent.

And I'm so glad I did. It didn't have a very high production value but it added so much value to my life.

Also, and I don't think this is a spoiler at all, the moral of the story strongly implied that it's human connection and the freedom to be our most authentic selves -- all ridiculous and imperfect and bold about it -- that makes us happy. That's exciting because I can do that!

Tonight I went to an art exhibition and barely saw any art because I was busy drinking wine in the courtyard from plastic cups with friends until the incredibly classy staff managed to shoo us into the parking lot so they could close, and then we hung out for another hour or so on the sidewalk and laughed loudly and often.

I am adulting so successfully, even if the laundry will never be caught up and my taxes are never filed without an extension, and folding fitted sheets is voodoo. It's like I don't even have to exercise anymore if I don't want to.

I mean, I will, but only for extra credit.

I'm just going to play with my friends and work for fun and take naps and pet cats and go to the beach until I get interrupted and that's the best life plan ever.

I'm so glad I thought of it. 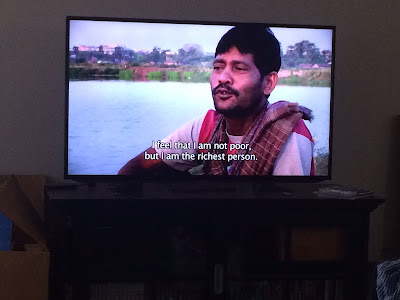 (I'm a member of the Netflix Stream Team. I'm lying in bed right now wearing a Fuller House shirt that says "I'm Stephanie" on the front and "How Rude!" across the back.  I get fun perks and free Netflix, but that doesn't influence my opinion because nothing ever does. I'm super stubborn like that.)
Posted by Ashley

Email ThisBlogThis!Share to TwitterShare to FacebookShare to Pinterest
Labels: #StreamTeam #Netflix, the secret of life is other people even the annoying ones

I'm a generally happy person, I look on the bright side, I'm an optimist, etc... but there are things in life that suck no matter how you look at them. Playing with friends and taking naps and working for fun sounds incredibly wonderful, and good for you for being able to do that. But I work a soul sucking 8-5 job and miss most of my kids' lives because of it. "Well then go find another job", "Spend less so you can work part time", "Find a way", I've heard it all. I'm a single mom and I have to feed my kids. I've looked for ways out for years and this is the only way. So YES, I make the most of the time and the happiness I have, but for some of us it's not as easy as you make it sound.

I 100% get that and that's why I get so mad at myself for not being happy all of the time -- I am fortunate, but it took a TON of adjusting to get here and all of it looked like massive failure on the way down...I'm talking foreclosures and failed businesses and skipped meals and personal drama that still haunts me. I also know that even at the very worst of all of it, I still could have done something (maybe not naps or a job that I love) to help contribute to that 40% and I also know that at the time it seemed utterly impossible. Everyone can make time to pet more cats and meditating takes 5 minutes.

It took a lot of letting go of stuff that seemed to matter to get to where I am now, and I know there was a little bit of luck in it working out this way but also a lot of learning, sacrificing and doing what it took at all costs. I hope one day your path ends up looking more like destiny than disaster, even if it doesn't yet, and I do believe it will.

This is officially my 1st time commenting...I am one of the shy ones though so I hear that's ok :).

I just wanted you to know that your blog posts bring me happiness and that you are a great writer. My Mom passed away unexpectedly last year (I was 25 at the time) and reading your blog posts at work helped bring a smile to my face during the tough days afterwards. My Mom was an amazing writer as well and now that I'm not getting her lengthy emails I'm glad to get a chance to read about another great writer's life events.

P.S. I'm pretty sure I have now read every single post of yours.

Wow, Ashley! Your first comment and one of the best ever! That's one I will always remember. Thank you so much for reaching out to me today and I'm so honored and glad that I could do anything, in any small way, to help you through your loss.

I'm amazed that you read everything and would like to apologize for 2008. Thanks.

Now I'm wondering if 2008 was the naked beaver bachelorette party?? I'm pretty sure that's when I subscribed. I've never laughed so hard at a blog post in my life!

haha 2008 was great! I loved how there were so many blog posts to read for that year :)