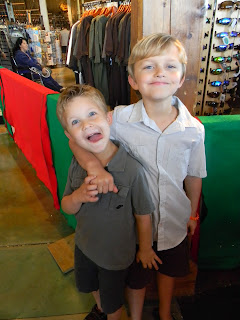 "What are you going to ask Santa for?" I asked as we waited in line to see Santa.

"A dinosaur, a book, Legos and a bike!" little kid said.

"But little kid, you have 2 bikes. Santa doesn't have room in his sleigh to bring people who hardly ride their bikes a 3rd bike."

Big Kid can't give Santa any suggestions, saying he has everything he needs and he just wants Santa to surprise him, because Santa should know better than anyone what he likes.

Yeah. He should. But it doesn't mean he wouldn't appreciate some suggestions. 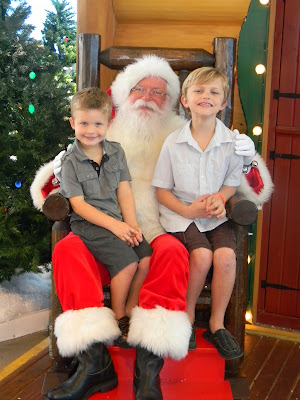 You have te funniest kids...

I've found your blog by chance and I love every minute of it! I've been crying happy and sad tears. I'm almost done with 2010 (I even read the comments!).

Anyhoo... :) Just wanted to wish you and your adorable family a Happy and Wonderful Christmas and a Fantastic New Year, with lots and lots of blogging. (I have to say I've noticed a decline in entries here.) ;)

When did little kid turn into such a big kid?! He looks so grown up!

Awww, Livie, you made my day! Thanks so much, it means a lot to me. I don't like the blogging decline either, I think my kids are less funny or something and blame them entirely. (They used to be funnier, Mrs. M!)

Lori, I know. :-( He is very big. It happened overnight practically.

Merry Christmas to you guys!

You have lovely kids. So sweet. Merry Christmas!

I'm kind of surprised Big Kid isn't asking Santa what he does in his time off.

Your son is about bikes like my daughter is about cats. She asks for more every year....I keep telling her, I'm not going to have a 10 yo "cat woman." (like those poor hoarder people.) Great Santa pic.

As a Northern New Englander..it is so funny to me to see kids on Santa's lap in shorts :)