Back in September, I decided we would take the boys on a surprise vacation to Disney World. I bought Mickey Mouse shirts and lunch boxes and trinkets and hid them away for all of those months. I hid Disney paperwork and my laptop screen whenever they'd approach.  I planned and dreamed and schemed not only the trip, but the surprise itself.

I ultimately decided that I would wake them up on a school day, get them ready for school, drive them halfway there and then pretend they forgot their lunch boxes. They freak out at the thought of being tardy; they haven't been tardy yet this year and the threat of it makes them get all worked up for some reason. (I think it's the word tardy; it's harsh and somewhat mocking). Then I was going to make them run into the house where their Mickey lunch boxes full of travel treats and shirts would be set up under a sign proclaiming we were going to Disney World and we'd leave right away, after a lot of shrieking and "I love you, mommy!"s, of course.

By the time January rolled around, I was dying to tell them but the surprise was more important. I didn't even tell their teachers we were taking them out ahead of time because I didn't want to risk ruining the surprise. The night before we left, exhausted from covert packing and preparing, and thrilled with the thought of how perfect it would all be, I posted the following on Facebook:

Tomorrow morning I'm going to wake the boys up, get them ready for school, start to drive them there...and then take them to Disney World instead. Muahahaha! I can't wait, keeping it secret is killing me!

It was one hour before bed time. I then closed my screen and left the room.

Ten minutes later, I heard Big Kid (who isn't allowed anywhere near Facebook) say, "You're pretending to take us to school but taking us to Disney World instead tomorrow?" in a hopeful, expectant voice from the other room. My stomach dropped.

Mr. Ashley (who trusts the "x" button in the corner of his laptop screen entirely too much, and who will never, ever be a good ninja) smooth operator that he is, yelled in a flustered voice for him not to be nosy.

"Did you read my Facebook?" I asked, not knowing what to do.

"Oh. That was a joke. I was just kidding. Sorry if I got your hopes up. That evil sounding laugh at the end meant I was kidding."

He looked at me like I was a moron and said, "Oh. Okay," with a smirk.

Then Mr. Ashley and I closed ourselves in the room and whisper yelled. I may have threatened (jokingly, kind of) domestic violence. Big Kid looked at us curiously when we came back out. I ignored him. He read his book with a bit of a smile on his face.

Later, after hurried conferences with my mom, my best friend and assorted others, I decided not to give up. (And not to hit Mr. Ashley). I approached Big Kid who was still reading and said, "Hey, sorry if I got your hopes up with the Facebook thing. I was going to do that for April Fool's Day but now you've read it and ruined the surprise." (I'm a freaking genius. For real.)

"April Fool's Day? That would have been awesome."

"Yeah. Thanks for ruining it!! I also thought of doing it in reverse, telling you we're going to Disney and then taking you to school instead. Haha, but that would be too mean.  I hope we can go to Disney some time this year but we can't do it this month. Anyway, you need to go to sleep, I have to drop you off early at school tomorrow because I have a meeting with that lady I'm designing that website with."

He seemed convinced but I still thought the idea must be in the back of his mind somewhere. I was excited again, but nervous too.

In the morning we followed our original plan, with Mr. Ashley dressing for work and leaving as usual and me getting them ready for school. Halfway there I asked if they had their lunch boxes and much worry ensued as I turned around. When we pulled up to the house, I told them to run inside and grab the lunch boxes and there was Mr. Ashley and the Mickey lunch boxes, shirts, and sign.

"We're going to Disney World!" I shouted at them, as they stood there confused.

"No we're not," said Big Kid. little kid looked back and forth between us.

"We are! Put on your shirts! See my shirt?" I said, unzipping my hoodie to reveal a Mickey shirt of my own.

"I know, you almost ruined everything! We really are going to Disney World! Right now. Today. Go look in the back of the truck, our luggage is there."

They still stood there stunned. "I won't have you making a fool out of me in front of safety patrol. I know we're not going. You're making us late."

"Big Kid! I would not joke like this! I especially wouldn't buy $80 worth of Mickey Mouse stuff and pack an entire car for a joke. WE ARE GOING TO DISNEY WORLD. WE NEED TO GO!" I strapped their Mickey ears on their heads. little kid believed me, his smile huge as he dug through his Mickey box and found Disney trading pins and assorted treasures. Big Kid was hesitant until he got in the car and saw that it really was packed, and then he was whooping and hollering in the driveway. 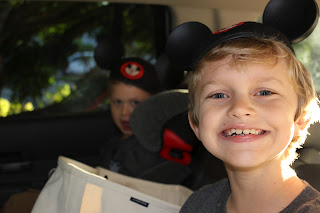 Here they are as we departed.
(Naturally, I made 300 jokes about a sale at "Slacks World" I thought we should stop at first, because I hadn't learned enough that morning about the damage I'm doing to my children by constantly joking with them.)

We stayed at Disney's Pop Century resort and went to the Magic Kingdom, Hollywood Studios, Epcot and Animal Kingdom. I loved every single second and so did they. At 5 and 8, my kids are at such a great age for Disney. They were also both tall enough for all of the thrill rides and we went on most of them, and they loved it. We had fast passes for Space Mountain right as the park closed, which was an exhilarating end to a thrilling day and meant we exited a mostly empty park.

As we strolled down Main Street and passed Cinderella's Castle, Big Kid held my hand, skipped alongside me and said, "I feel so alive! I feel young again! I feel like a little kid in a big kid's body, I feel maybe four inside. I am so happy," with a huge smile across his face.

Having him hold my hand all vacation long, getting a few glimpses of Big Kid-feeling-four-again and watching him and little kid laugh and play until their heads hit the pillow all weekend long was completely priceless.

(And totally worth the cost and exhaustion.) 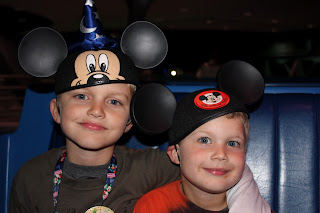 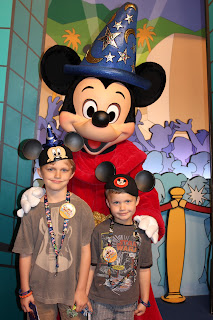 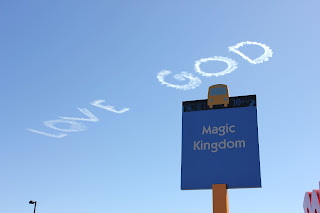 Email ThisBlogThis!Share to TwitterShare to FacebookShare to Pinterest
Labels: Phew

This amount of happiness brings a tear to my jaded eye. Lovely.

LOL that Big Kid is such a crack up! I'm glad you had a great vacation :)

Oh girl, I love your blog! You make me feel so much less quilty at some of the pranks that I used on my children. You also make me miss them at that age so very often. Big girl is now 32 with three babies of her own, Big Kid is 29 with a 4 year old angelic redhead and a son to be born in April and Little Kid has two sons and baby number 3 coming in September. Your blog brings the memories so clearly back to my heart of all the times with them that I am either laughing or crying tears of joy. Love their guts out!!!! They grow too quickly.

I sure have been missing your blog. Thanks so much for sharing your life with us. I'm a little teary-eyed with Big Kid's description of feeling young again. Love your family!

That kind of trickery and planning would have totally backfired on me too! What fun! Sounds like a wonderful treat for you and your kids. I hope we can do that for our kids sometime soon!

I'm one of those non-commenters.

We were at Disney the week of January 15th through the 20th and saw the Love God in the sky. My husband said maybe they do it frequently, but I thought it was interesting if we were there at the same time.

Thanks so much, guys, such nice comments!

Jocelyn, we were there starting on Friday, can't remember now if that was the 20th or 21st (and too lazy to look) but I saw other similar messages on other days, so I think they do it frequently.

LOVE IT!! we went last November but since it was a huge family trip (my SIL her hubs & kids and my FIL & MIL also went) it was too hard to hide it. My girlfriend though is doing this same thing TOMORROW morning with her kids, they have no clue that instead going to school they are heading to the airport to go to DW! I can't believe she was able to keep it a secret!

I have a 3 month old little boy, my first, and hearing about Big Kid's disney experience had me in tears. What a great story!

I came across your blog while attempting to come up with (and pull off) the most epic Disney vaca suprise. I was laughing out loud at your whole post. It sounds like what would happen here. My boys are 3 and 8, and I may be more excited than anyone right now - telling them will be so fun! But I don't know how you could keep quiet so long! Mad props to you!