The boys were playing a game in the pool today that made them look like they were hugging; it was super cute and I pulled my phone out to take a photo. The reality was that one was playing king and one was the slave and the king rode the slave's back and berated him for adding mayonnaise to soda, forcing the king to create a new law about no mayonnaise and soda mixing, and the slave would struggle to escape all of the abuse. (Big Kid was the king, in this instance.)

But still, in a photo it would have just been a hug, perfectly normal and adorable, two happy brothers that don't seem at all to be role-playing a relationship of tyranny. I didn't get the photo though because Big Kid swam away.

"Why can't I take a picture?" I asked as he would sink back under the water. "I can't get a picture of you and your bro hugging? For me?" as he slid back under.

little kid was all for it. "I'll get your picture for you," he assured me, swimming under to retrieve him. As they came back up, he said, "Dude, take the picture! Come on!" and clung to him, pressing their faces close. He went back under and little kid pulled him back up.

"Bro, do it for your fans! They love you on Instagram!"

Yeah, all 32 followers. I am very new to Instagram and was surprised my 6-year-old knew of its presence. I almost dropped my phone in the pool because I was laughing so hard. Big Kid would not pose for the picture.

So I got this one instead, and if we're being honest, it's a more accurate representation of our time spent at the pool anyway: 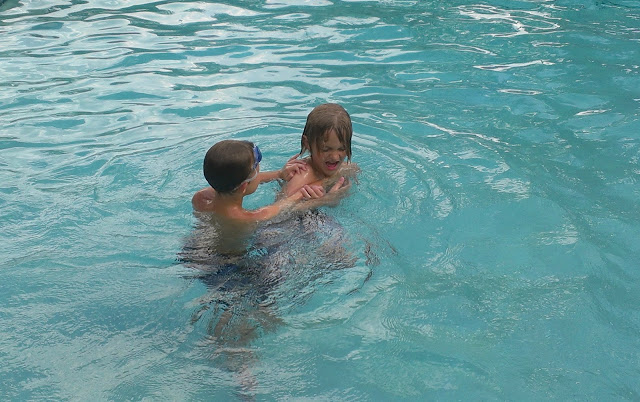 Ahh! The joys of raising boys. You can't force them to give away those hugs sometimes, but let some outsider poke a bit of fun and they come together quicker than magnets. It's actually quite the beautiful thing, in my opinion!

I frickin love this picture. Better than a real hug, if you ask me.

They are darling! My boy is just a year. But i hope to have two so that i may one day have these sweet experiences.

Just fell through a wormhole I believe.. Not entirely sure how I got here but I'm glad to have discovered you!