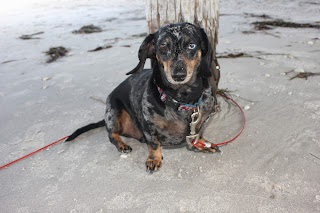 My poor sweet Murphy Louis has a collapsed vertebra in his back and has been paralyzed and at the vet since Monday. We have fluctuated wildly between giving up, selling our soul for surgery, rallying behind the idea of confinement and wheelchairs and manually expressing bladders and swim therapy, but our very honest, very compassionate vet has informed us that today might be the day where we are out of options.

He's only five, and comically cautious. It seems so unfair for his body to give up like this--a dog who doesn't do stairs or couches or beds or dancing or running. A dog who takes no chances.

I went and saw him last night. I'm still more traumatized by the passing of my cat than is normal (if someone said I could have one more day with her in exchange for my pinky finger, I would not  hesitate to offer my hand), and felt tremendous anxiety over the thought of being in that same back room and of going to say goodbye...again. But I'm glad I went.

He was so happy to see me, smiling big in spite of his pain and trying to scoot closer. I got a stool so I could reach his cage and leaned my entire upper body into it, resting my head next to his and thanking him for being such a good friend, such a loyal protector, such a selfless soul. I alternated between chattering happily about how many treats he deserved and how much fun we had at the beach house together to crying quietly into his neck about how important he was to our family and how sorry I was for not always giving the same level of love that I got.

At one point the janitor tapped me on the back, offering a Kleenex.

"I been praying for the poor little guy," she said softly before shuffling away.

One of the vets approached and told me it looked bad and that she had spent the day researching special slings and calling local surgeons to see if they would take a chance with a risky and expensive surgery, with no luck. He can no longer control his bathroom function and I guess that makes him not a candidate for a wheelchair.

When I went to leave, he began to cry and I got halfway down the hall before turning around and going back to him. "I will be back tomorrow," I promised, pressing one more kiss onto his head, him pushing his face into me. I couldn't sleep last night, because I so badly didn't want tomorrow to ever come.

The kids don't know how bad it is yet. They have asked for him every morning. Big Kid has an assignment to finish, which is coincidentally a story told through Murphy's point of view, and I'm waiting for him to finish it so we can have The Talk and decide what to do about goodbyes. I am dreading this moment almost more than the rest of it because as a mother, my grief will have to retreat behind closed doors in order to lessen theirs. There is a great temptation to just tell them that he passed away after the fact, but I can't imagine them just never seeing him again.

Once Big Kid told me that when he was an adult, he wasn't going to have pets because it hurts so much when they die. I told him that was absurd, to think of the joy they brought to our lives!

But I'm beginning to agree with him.

The thought of not hearing frantic barking at every neighbor who passes fills me with dread instead of relief. I will miss how he acts when he gets a treat, sitting and waiting patiently and then tossing it into the air over and over again while happily prancing in circles around it. How he drove me crazy at the beach house with never wanting to leave my side but being too lazy to participate in beach walks. Of the time he jumped from a paddleboard out in the Gulf and swam as hard as his little body could to reach me on shore--not because he doesn't like paddleboarding but because he can't stand to be away from me. About how awful it is that his final four nights were spent alone, without me. Ugh.

Email ThisBlogThis!Share to TwitterShare to FacebookShare to Pinterest
Labels: the end of an era

I'm so sorry this is happening. I would be as devastated as you are right now. Our pets are our families. I will be praying for you and him!

I'm so, so sorry. Losing a pet is so hard, and your family has seen more than your fair share of it lately. You clearly love your animal friends very much, and I'm sure they feel that.

This was a much longer comment, but the internet has eaten it twice now...

I'm so, so sorry for your loss.

I am so sorry, the decision making is SOOOO hard. I went and gave my dog an extra hug thinking about you and Murphy.

I'm so sorry. :( I'm tearing up just reading this. I'm a dog owner, too, and luckily mine is still happy and healthy at 3 ½. But even just thinking of her not being here someday can send me into a crying panic attack.

I will be hugging my little Murphy (named after yours) a little closer tonight. I'm just like Amanda...I cry just thinking of losing him.

I'm so sorry this is happening to another pet!

Oh my word! I had a break down earlier in the evening about my own dog. I'm now sobbing for you!! I am so so sorry!!

I'm so sorry. The post you wrote when your cat passed away was heart wrenchingly beautiful.

Im so sorry Ashley. I cant imagine the pain uor heart is feeling right now. We had to put our puppy to sleep due to parvo and it took me 5yrs to get over it. My thoughts are with you and your family.

My husband said he'll be hugging our dog a little harder from now on because of your post.

This is absolutely breaking my heart for you and your family. I can't believe that you all are faced with another loss so soon. The absolute worst thing about pets is losing them, and I'm in tears reading this just thinking of the day I lose my sweet pup. I'll be thinking of you guys.

I'm behind on your blog and just now read this. I sat here and sobbed through this whole post. It's painful how similar this is to what we've been through. Just before Christmas, someone shot our sweet pit bull and just left her on the road. Her back legs were paralyzed, but she still managed to drag herself all the way home. We had no choice except putting her to sleep. She was a very active dog, loved to run and swim. She could never be happy living with a wheelchair. I'm so, so, so sorry that you've had to go through such a similar thing. Just heartbreaking.

I can't believe that happened to you, MTG!! That is so freaking sad, the element of cruelty makes it so much more horrible, I'm so sorry you experienced that. It is hard.

It's great to see you, by the way.