Yesterday was hard. Today it all feels a bit unreal. Last night I was in a complete panic that there had been some mistake, that we had done the wrong thing, that we should have gotten more opinions, that $7000-$10,000 wasn't unreasonable for a 70% chance through surgery. I asked Mr. Ashley several times, as if it would help at that point, "Are you sure? There was nothing else? There was no other way?"

But this morning I'm more at peace with it. I suppose.

(It all still feels terribly unfair.)

I had asked the boys how they wanted to handle things and they both said they wanted to say goodbye. My mom met us at the vet's office, which was nice because she was one of Murphy's favorite people. It was like a living wake in that small room, with us holding him and petting him and promising him he would see Lily and Pearl again soon and offering our ideas on what dog heaven would be like. Murph was so happy to be with us yesterday but there was a certain spark missing from his eyes, like he was already a little bit gone.

They left the room and I sat on the floor and held him in my lap for the end, with Mr. Ashley and I telling him he was such a good boy and he was going to get so many treats. It was easy and peaceful for him. It was excruciating for me. It was definitely one of those "Being a grown-up fucking blows," moments but I'm glad I was there and I hope I can go as easily--without conflict, having said my goodbyes, being well loved. The first injection put him into a twilight sleep and I envied that depth of restfulness.

Back at the house, Big Kid said he was glad he went but that he wouldn't be doing it again. I told him that was okay. I don't necessarily want to do it again myself either.


The time Murphy swam in from the paddleboard to reach me: 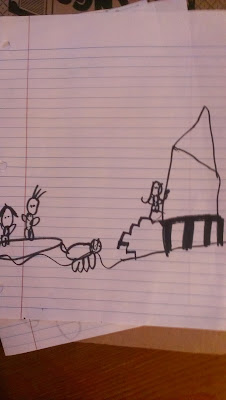 A picture of the ladder to heaven: 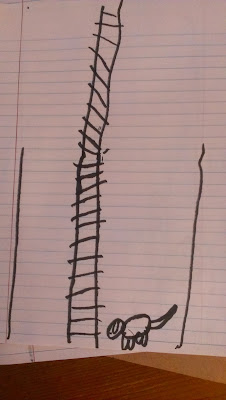 Murphy offering to protect Jesus (this one has earned the spot as my most precious possession): 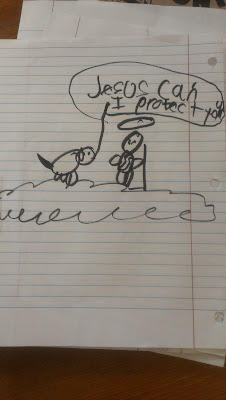 and a short story that translates to, "So he did it one day. He saw a person, he took action, bark bark, where do you think you're going. I'm going to heaven because I died. Well did I die? No, you just came up here. You could go back down." 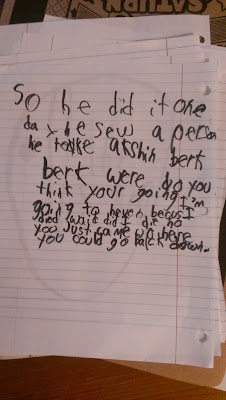 And so it goes.
Posted by Unknown

Email ThisBlogThis!Share to TwitterShare to FacebookShare to Pinterest
Labels: barking at angels

I am really sorry. I am sitting here with tears running down my face and my heart aches for you all. :( :( :(

This post and your lost brought tears to my eyes. So sorry about the loss of your beloved beastie - it really is unfair that science hasn't given them human lifespans yet.

This post made me cry. Hope you all are comforted with memories of Murphy. Xo

Bawling my eyes out after reading this.

I'm so so sorry. Pets really suck sometimes because the end is always the same - total heartbreak.

I'm so sorry for your loss and I'm so sorry that you have to deal with being strong for your kids instead of being able to be the mess you want to be - one of the reasons I'm dreading the loss of my pets too.

Huge internet hugs to you.

I am so, so sorry for your loss. It is unfair and it completely sucks. Thank goodness Murphy had a family who loved him SO much, they knew when it was time to let him go.

((HUGS)) to your whole family.

I am so, so sorry for your loss! Saying goodbye to pets is the worst, especially when you have to be the adult and actually be present.

We did this last year. Our kids were 26 and 32 at the time, but they came home for Max's end. While it's awful to have to go to this place, it is so helpful to have the whole family together. When we saw how peaceful Max was after the vet gave the first injection, we knew we were doing the right thing.

Ugh. I was thinking about you guys and Murphy today. xoxo

Ohhhhhh.....I just saw these posts. I'm so, so sorry. I loved reading about your little lovey baby at the beach and how he adored you so. I'm so glad you held him while he passed on, and I'm so sad for you all. Can I ask what happened? Was he injured in an accident or was it congenital? I'm sure it hurts to even be conscious and breathe right now; saying life isn't fair is so trite - but it really, really isn't.

Thanks so much everyone, I know these types of posts are awkward to respond to but it means a lot to know others care.

Lisa, it was just some fluke congenital thing, I guess it happens frequently in Doxies his age. :-/

As darling as they are, I will never have another Dachshund again because of it.

I am so sorry for your loss. I loved reading about Murphy, and I know he will be missed by all. I also lost my family Dachshund on New Years Day. He was 15 years old, but his death still came so suddenly. He seemed fine on Christmas. I was bawling like a baby when I got the news from my mom that the vet had called her and he had passed on. I am glad that I had one last Christmas. We just have to remember the good times with our pets to get us through, and know that one day we shall see them again.

I'm so very very sorry for your loss. Sending big hugs to you and your family. xoxo

Huge hugs to you and the family, it is absolutely heartbreaking! We had to have our cat put down in September and I miss him every. single. day.

Hey, if your kiddos are having a really hard time, have them write a "letter to heaven" - have a friend or relative respond to them on your pets' behalf. If you email me I can give you my address and I'll write back if you don't want to ask anyone you know. I hope that's not creepy - I have seen someone do that for my friend's children and it made them so happy to get something back. I just feel so bad for you all :( Good luck!

Been thinking of your family as you cope with this. I am so sorry for this loss. lk's drawings were so touching--I'm sure Murphy knew how much all of you loved him as he went.

My Gawd Ashley, you have had your damn share of dying pets! I am soooo, so sorry about Murphy. If there's one thing that's clear, it's that your pets are members of your family. They are loved and treated so wonderfully. Murphy got lucky. Love and hugs all around.

Honestly, rarely does anything bring me to tears, and reading this did. Especially the drawing of your doggy and Jesus, I feel like that's something I would have done had my dog died when I was a kid.

I'm so sorry for your loss. I moved to London 2 years ago, and had to leave my dog behind for a bit, sadly, she died before I got to see her. The crazy thing is, I dreamt with her the night she died, as if she was trying to say goodbye herself.

I'm convinced that I no longer want any pets, it was too much for me to handle. But I'm honoured that I even got to meet such a precious little person, and I'm sure that all of us who have pets and have lost them, can say the same. Thanks for sharing this. I hope that the pain of this soon becomes a joyful memory of all the great times you shared together.

Massiel, that's so neat about the dream, that kind of thing brings me a lot of comfort. I'm glad you experienced that, and thank you for sharing it.

Thanks for all of the kind comments, everyone, it really means a lot.