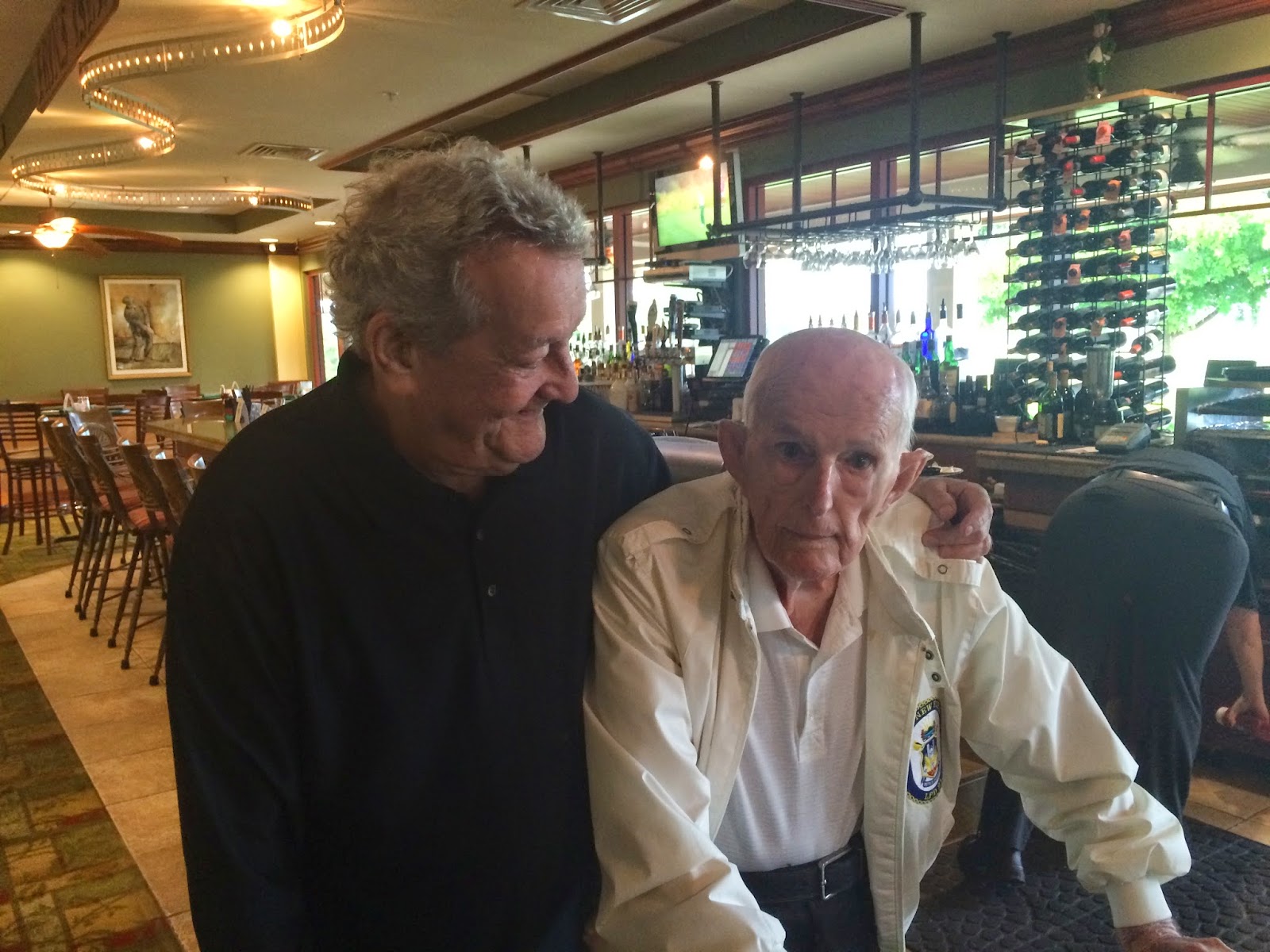 These were my grandpa's best friends. I met them at his funeral on Thursday.

Of the three of them, two were nearly deaf and one can barely speak but their friendship has spanned years, has been the witness of this physical decline, and has persevered in spite of it.

I was doing really well with my grandpa's passing. I figured I was just all out of emotions for the year and that I know, really well, that people die. My brain had decided that, from now on, that shitty fact of life was going to be strictly business...right up until the little one was wheeled in to my grandpa's funeral on an office chair, after running out of energy in the parking lot.

He was a wild sight, but sharp and focused and sincere as he met our family. Then he got up to speak, but he's the one who can't speak, and he delivered the most beautiful whispered eulogy that no one other than my cousin and I heard. He was funny and authentic and truly, heart-wrenchingly sad.

And that slayed me.

The other got up and shared tales of their years of shared breakfasts and how my grandpa hated his jokes. He was "the young one" in his late 70s. During any pause in the ceremony, he would kid that the one who couldn't speak would like to speak again. The duo was dark comedy genius and I wasn't sure whether to laugh or cry.

I met his other friends--tiny, wizened, filmy-eyed people whose creased faces creased more as they openly cried. They were simultaneously hardened and softened by life and their many years. It was amazing and it also sucked. My biggest consolation lately while reviewing morbid thoughts is that some people live to a ripe old age but now I'm thinking maybe that's not such a great end either. My grandpa was going to be 93 next month, and I console people with that as they try to console me, but it's really not much consolation.

Those old people spoke of their memories of lost friends and spouses, and their deep sadness made me realize that, unfortunately and fortunately, there is no such thing as being an "old pro" at grieving.

(I want to punctuate that sentence with "Fuck" but grandpa wouldn't like that.)

This trio down to two really did me in. They also made me realize the true value of friendship.

One of the most surprising aspects of motherhood was how incredibly isolating it can seem (and maybe this can be said of adulthood in general, I'm not certain since the two went hand in hand for me. I became a mother at 25 and I only consider those older than 25 to be official adults). When I needed friends the most, I had the hardest time making them. I can now say with certainty, through a little bit of luck and a lot of hard work, that I have a few friends who I can count on to roll into my funeral on an office chair full of whispered memories 60 years from now.

I urge you to look for that and cultivate that, and if it's not readily available, to keep looking. I urge you to be the most you that you can be, because that's how you find those kinds of friends--the type who can spend years contentedly together despite no longer being able to hear what the other has to say.

Also, be nice to old people. They're dealing with a lot of shit.

So that's what I've learned for the week. However, I'm officially done learning life lessons for the year--seriously, it's enough already. Please let's get back to poop jokes.
Posted by Ashley

Love this post. Made me laugh and cry. You are missed on the bhb...hope to see you there again soon!

So sorry for your loss, Ashley. This piece is a helluva tribute to him.

I'm a looooongtime reader but have never commented. I just wanted to say that I have been so moved by the openness with which you have shared your feelings about the loss you have experienced this year. I love the funny posts and following the adventures of your boys, but you have really been eloquent in your posts about your family members...both human and furry. I hope the rest of your year is filled with nothing but joy.