1. I'm the only person in the house who hasn't outgrown Playmobil toys. When little kid put his in the "to donate" pile last summer, I begged him to reconsider. They are the only playset involving more than one piece that I don't hate. I just think they're so cute and have so much potential for creative play and imagination. Also, if I have to accidentally step on something, I'm picking Playmobil over Lego every time.

2. I use playdates as a cover for hanging out with my own friends.

So when Netflix offered to send us a Super 4 party pack if we would host a viewing party for the new Playmobil show, I said yes since it was a win/win for me.

When I asked little kid to watch it, he was initially reluctant and insisted that he was too old (because he's all grown up at 8). I told him he only had to watch one 11-minute episode and offer his honest opinion. He watched three, laughed the whole time, and did that annoying thing where he repeats every line he thinks is funny.

There was a lot of repeating.

He eventually admitted that he loved it and would continue to watch. The show features four children: one girl pirate, one boy genius spy, one ditzy fairy girl, and a knight. I was also pleasantly surprised by how much I enjoyed the show -- it was cute, funny for a wide age range, a great length, and I loved that there was a girl pirate character.

A friend of mine has her own Super 4 -- a 9-year-old, 4-year-old, and two 2-year-olds, which I'm pretty sure qualifies her for multiple awards and a free, all expenses paid vacation with a nanny. She's like one-stop shopping for a guest list, which is very convenient for me and all of my projects.

Early on in the evening, before we even broke out the wine (which is a must for medicinal purposes around that many kids) she yelled out, "Dude, where are your pants?!?" and I turned to find a small person wearing a polo shirt, underoos, and sandals. It was a situation that didn't faze any of the party attendees and we briefly debated if requiring pants at a public park was even worth the effort.

Here's our crew. All wearing pants: 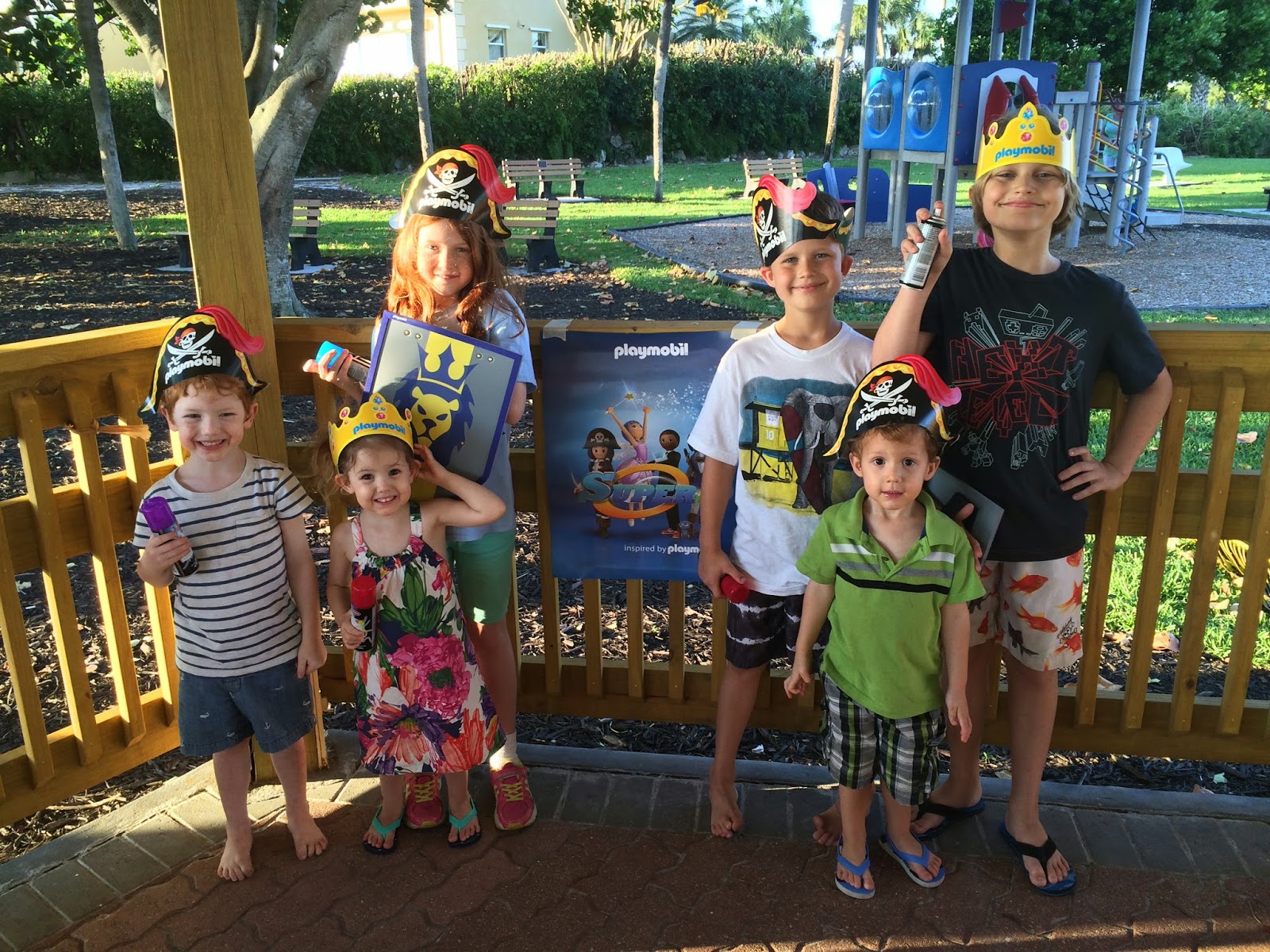 We attempted to feed them the nice picnic meal we had brought, but between people setting their watermelon slices directly into duck poop instead of the plates we so thoughtfully provided and lying about who finished their chicken so they could have cookies, we mostly gave up. We were just feeling lucky people were clothed at that point.

We got the wine out then. We drank it quickly.

While we tried to eat our dinner, they gathered around and begged to do the silly string duel. We promised that they would. The wheedled and pleaded and got territorial about colors and asked repeatedly until our resolve was broken. We gulped down our wine and set them up just to make the noise stop.

We started off very organized; a sheet down to collect the mess, people carefully paired up, rules explained: 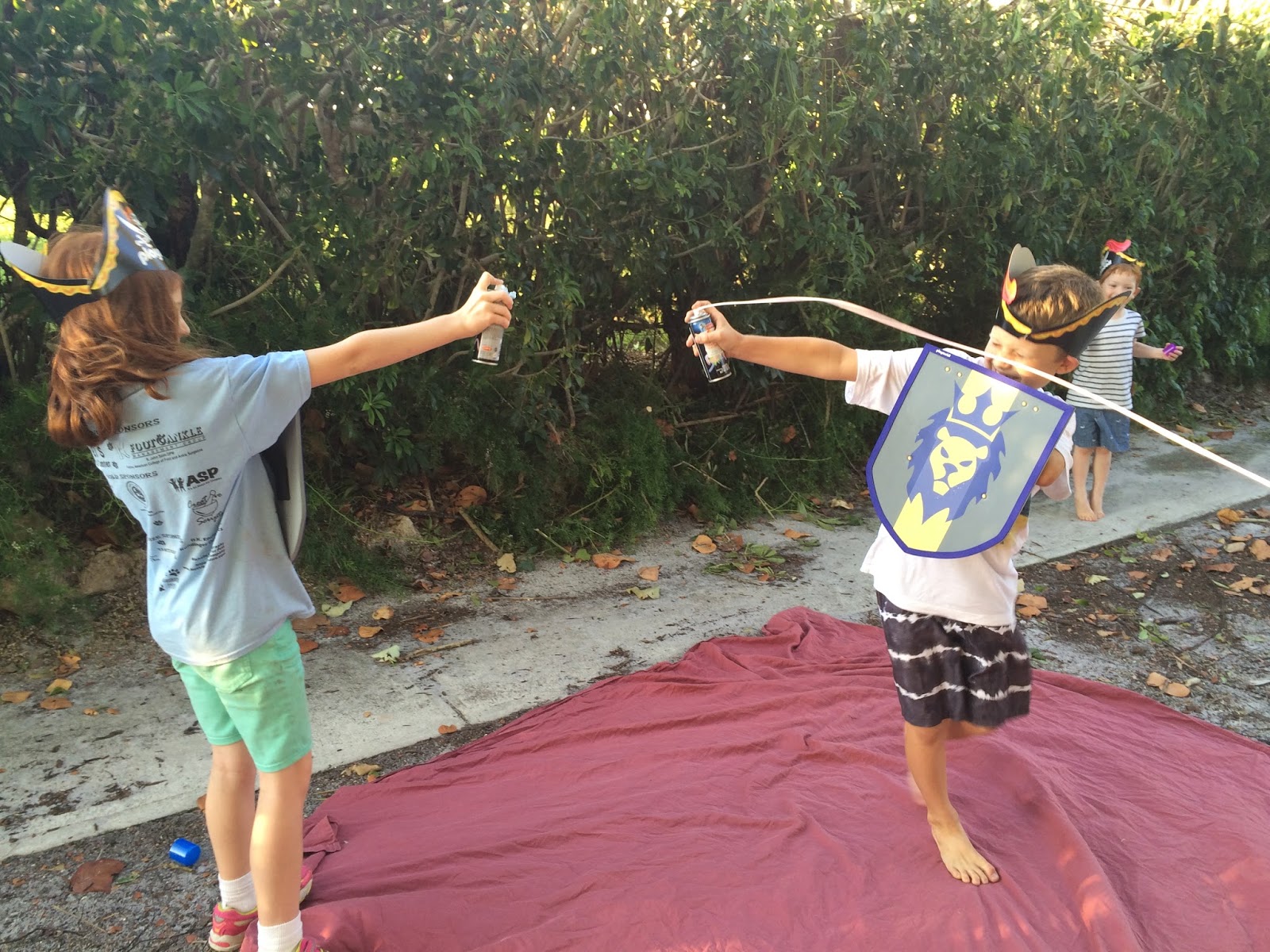 Soon we just gave them all a can and let them go wild. We may have even contributed to the chaos by getting involved in the shooting. No one stayed on the sheet and we had to clean up every piece in order to protect the ducks that poop on the picnic tables. And by we, I mean the moms, of course. 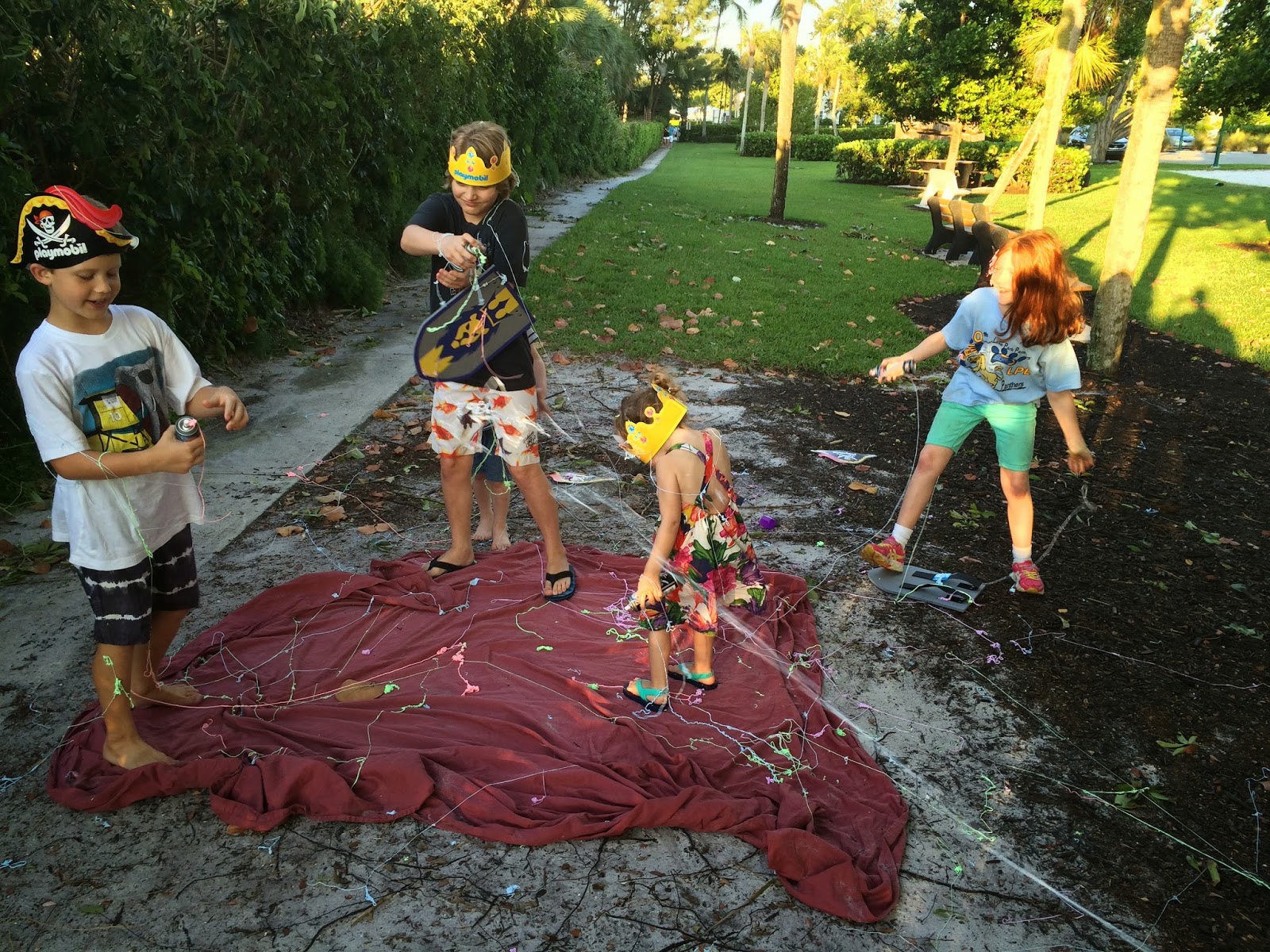 Afterwards, little kid offered one of the Playmobil shields to the boy twin.

When I brought it up with little kid later, he smiled and said, "Yeah. That was cute. He gives really good hugs."

We relocated to the beach, where we were going to let the kids run free while we toasted the sunset. We Duggar-ed them up, assigning a big kid to a little kid like the Duggar family does so we could chill like Michelle.

It was a great plan but people still needed stuff constantly -- I pointed out that we should hire a sitter for the next playdate party.

"Maybe you should consider not having four kids next time. I mean, if you ever get reincarnated or something, maybe have less kids." He advised.

"That thought has definitely crossed my mind. Twins are kind of like a buy one get one deal, you know? But which one could I live without?"

They all appeared then, wet and sandy and shivering. We wrapped them in towels and I pulled the twins onto my lap as we watched the sun set before us and the moon rise behind us.

"What was your favorite part about Super 4?" I asked the boy twin, enjoying how they were both small enough to nestle easily into my arms.

It was so insightful and sweet. Kids are so amazing. They make all of the chaos so worth it.

"Ms. Ashwee? Can we has a sweepober at your house? For lots a days?"

Watch Super 4. Be happy even when you're sad. Find good excuses to spend quality time with your friends and their kids.

And just say no to sleepovers.


(This post was written as a member of the Netflix Stream Team but the opinions and actions are my own. I doubt Netflix endorses drinking at playdates or no-pants parties but I might be wrong there.)
Posted by Ashley

I am SO EXCITED to show my son Super4, in hopes it will reignite his love of his Playmobl toys, as I secretly love them, too. I was SO disappointed when he was making his Christmas wish list last year and for the first time since he could write a Christmas list...there were no Playmobil toys :(