Max has lived with us for one year now.

Like babies, in a general sense I think they are awesome, and I probably think yours is cute, but I don't want more of my own and spend a lot of time wishing people wouldn't bring them to grocery stores.

I am, however, a Max person. I loved that face the moment I saw it and he loves me with a level of devotion that is both enlightening and exasperating.

He started school two weeks ago because he barks menacingly at children, visitors, waitresses, people in my space, bigger dogs at the dog park, and generally doesn't listen when it doesn't suit him. Now that he knows there is no chance of becoming a street dog again, he feels comfortable enough to act like a jerk.

The first week went...okay. He couldn't move past the thought that a gathering of dogs should have been a puppy playdate and he was unmotivated by treats. He was mildly obsessed with a Labradoodle and would alternate between trying to play and barking aggressively about not playing. He had to be separated from the group a few times. The trainer had a little girl try to feed him a piece of bacon and he was not having it, not even for bacon.

I was pretty impressed at the few things he did manage, though, and felt like the first week is rarely better than okay. We left hopeful.

The second week went...less okay. He pooped on a sidewalk. He decided he didn't like the new dog in the group. He did very few of the tasks because he was busy expressing his interest/anger over the new dog (a Doberman that could have eaten him in two bites). He had to be separated from the group. He did accept a piece of bacon from one child but when the child from last week offered him some on the second round, he barked at her and refused to take it.

He is the star of the show and not in a good way.

At the end, his trainer (who is very knowledgable, positive and encouraging) made a comment like, "After all, they say your dog is only as screwed up as you are." (I may be misquoting her -- I was hot, covered in bacon grease, and holding a bag of poop.)

We have two weeks left and I'm not all that hopeful.

As we got into the car, I was thirsty, regretting the money I'd spent, and annoyed that I was the one taking this project on.

And then I looked over and saw this: 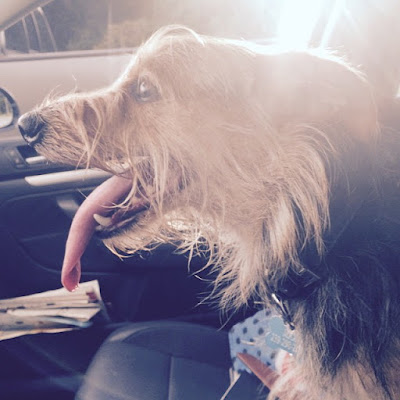 He was so happy to be trying something new. He looked so proud of himself and full of joy and gratitude for the opportunity. He did not care whether or not he looked like an idiot in front of the others. Then he drank all of the water from my cup with his impossibly long tongue.

We should all be so lucky.

My dog is as screwed up as I am and I'm in good company because of it.

Maybe we'll improve and maybe we won't but we will try to have fun trying.
Posted by Ashley

Time and patience <3 Is he feeding off of some nervous energy you're putting out possibly?

Also - where are all the pet pictures you were worried to post... cats and dog and hedgie... WAITING...

That *is* the longest dog tongue I have ever seen! You might have to change Max's name to Gene. :-)

Well that was super nice of the trainer lol. My dog is a scaredy cat so then he acts like he's vicious but he really just wants to curl up on my lap and be held.