The other day I was going to go to power yoga (I swear. Really. I seriously thought about it so hard.) and I went to the mailbox first and found this: 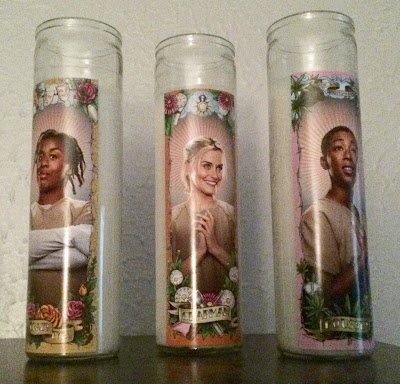 I mean, really? It's as if Netflix personally laid out my pajamas, turned down my sheets, and made a little snuggle nest out of my pillows while handing me the remote. Like they were stroking my hair and saying, "Shhh, Ashley, you don't need to work on your inner, outer, or house self tonight. You need to relax. Of course you don't need to fold the laundry while we watch this, my pretty, pretty princess who is also so fun and funny."

I guess you could say things are getting pretty serious between us.

I've been watching a lot of Hotel Impossible, and consider myself a professional in resort management now. My husband and I extensively critique every hotel we visit and discuss what changes Anthony and Blanche might make. We also get super pissy if any decorator other than Blanche is featured on the show. I have no idea why this show appeals to me so much but I've watched 26 episodes. I am not necessarily proud of that.

We also got super sucked into Bloodline. It was slightly cheesy at times but the storyline and execution were compelling and kept us hooked until the end. I love the original programming by Netflix, and I'm not just saying that because we're best friends.

As part of my ongoing commitment to discover things once everyone else is already over it, I also started watching Portlandia. I was amused and confused. The first time I watched, I thought I might have had more to drink that night than I originally thought. The second time I watched, I realized it's just like that. It's completely absurd and I love that about it.

Oh, and I almost forgot but one day I was sick and watched the entire World Without End miniseries at once! It was a glorious day. This was one of the few times in the history of the universe that I thought the screen adaptation was as enjoyable as the book. I moved on to The Borgias and was into that until Orange is the New Black returned.

I also have plans to start watching Grace and Frankie. It's one of the most pressing goals I have set for myself; as you can see, I've been very busy and just haven't gotten around to it yet.

I am retiring to Belize some day with Netflix and a house full of cats. I am also a member of the Netflix Stream Team. But I really did watch that much television since the last Netflix-related post, and all opinions above are my own. If you don't find Portlandia confusing or you like hotel decorators who aren't Blanche, you are totally 100% wrong but that's me saying so and not Netflix. (But I'm sure they'd secretly agree with me due to our special connection.)

Let me know if you have any suggestions to add to my queue and be sure to watch OITNB so we can discuss!
Posted by Ashley

I don't watch a ton of tv, but OITNB was actually my best friend for 5 days while I binge watched the 3rd season. I am having serious withdrawal already, and miss my pj's, wine and Tastee. I think I need to get out more. :)

OITNB is so much love. I was a bit perturbed this season because it felt very short and like not very much happened. I think they focused more on character development and less on high-stakes drama, and that left me feeling a bit cheated. And I missed Larry and Polly too.

My best friend has fallen in love with Ruby Rose, as have apparently half of all women who watch the show, and I think you could discuss the effect Ruby/Stella seems to be having on women who previously did not like women. But this isn't a thesis for a degree in Netflix.

I wish I had time to really invest in the Netflix shows I really want to see: House of Cards, Breaking Bad, and Sons of Anarchy. And something makes me feel like I need to watch Friday Night Lights and Pretty Little Liars.

Note: If you haven't watched Gilmore girls, you are obligated to watch it from beginning to end. You don't have to be nuts like me and watch it all no less than 60 times, but once is good for your soul.