I'm way behind on picture posts lately. I still want to post some vacation pics but who knows when I'll get around to that. So, here are some pics from the boys' Super Mario Bros. birthday party Saturday: 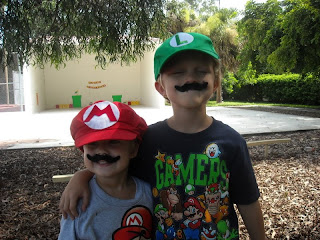 Big Kid wore his mustache for most of the party. little kid wore his for almost exactly 15 seconds. 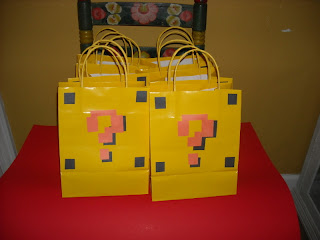 The goody bags had Super Mario gummy snacks, peach rings candy, Mario trading cards, and a Mario keychain; the boys got Mario or Luigi hats with mustaches and the girls got crowns and a diamond ring. 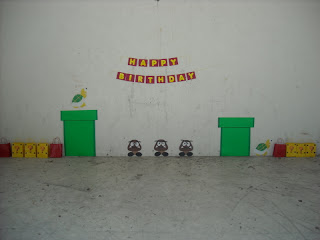 I made those background decorations. My entire house was covered in construction paper for a week. No lie. 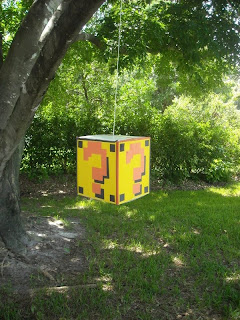 We made the pinata, too. It fell down before it broke so I guess we flunk pinata-making. 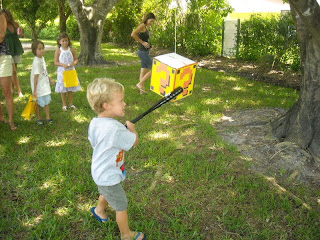 Check out that look of determination! 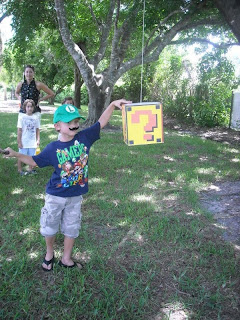 Big Kid was furious when Mr. Ashley lowered the pinata up and down as he swung at it. But then he yelled for Mr. Ashley to do exactly that to all of the other party guests. 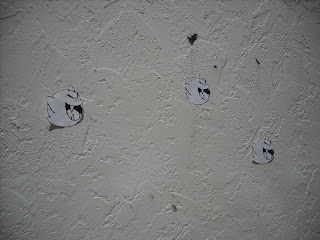 There was an obstacle course where the kids had to do different tasks, including walking backward in front of the Boos. 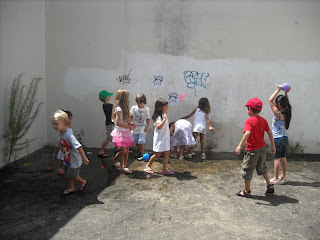 Then they water-bombed Bowser at the end--unfortunately the water balloons wouldn't break. That actually made it all pretty funny. I didn't graffiti the racquetball court, by the way, it was already like that. 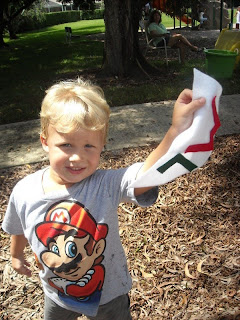 little kid captured the flag at the end of the obstacle course. 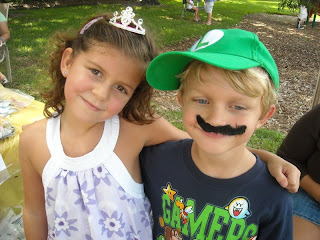 Big Kid and Em. Aren't they big?? I have close to 7 years of pictures of them like this!! 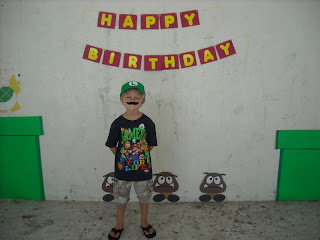 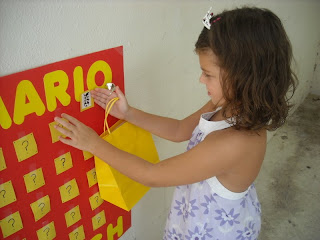 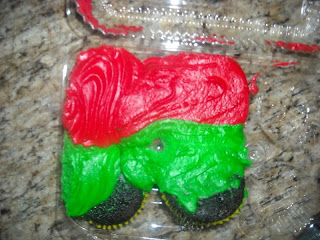 This is how hot it was. Ridiculously, mind-meltingly hot. The cupcake frosting slid right off of the cupcakes and onto all of the kids' clean shirts. Oops.
We also did a Yoshi's egg hunt with hidden plastic eggs that had a gold coin, Mario stickers and Mario and Mushroom charms inside, and a pass the Piranha Plant game. The winners got Mario money pouches.

I wish I could show you the invites because they were the cutest part, but our personal info is all over them in an un-editable way, so sorry. I also made scratch off tickets that the kids had to scratch off to determine who their character was. Super cute and fun!

The kids had a ton of fun and the boys are already trying to plan next year's party. It's not happening. I'll need until at least 2012 to even consider another party.
Posted by Unknown

Oh my gosh, I am so impressed with the decorations and activities! Did you get any help?

That is such a great idea! I love it! I am going to send a link to this post to my friend, he boys love Mario!

Oh my great party I have a huge Mario fan here also and he will not be seeing this as then he will be pissed his mom didn't make such an effort on his party:)

Wow. That was a great party! You rock!

Super job, Ashley! You can tell in the pics the boys totally loved it, and I'm sure that made it all worthwhile.

WOW. Great job Ashley. You totally rocked the decorations and games for that party. I bet the kids had a blast.

You are GOOD! You should start a party business! Very cute pics!!!

This is such a cute idea. Looks like you put a lot of work into this party. Were you wore out? Love your header too-(50's housewives ;O))

Wow, you did a GREAT job. That is something Big and little kids will remember for the rest of their lives!

Good mommy points for you. xo

You did a great job! Chay wore his mustache IN HIS HAT all night long... He still swears that lk is the funniest person ever. Can we say boy crush?

this is so super amazing! i have been trying to convince my boys to go as mario/luigi on halloween for like... 3 years now.

Wow! That is awesome! I feel super lazy now! I love the gift bags the most for some reason.

So cool!! I love the gift bags and pinata the most. :) Good job!

you are an awesome momma!

Did you make the hats? If not where did you get them?

I bought little kid's Mario hat blank from Amazon and made the felt patch. Big Kid's I ordered from some Chinese company and it was the wrong style hat but I didn't have time to return it. For the goody bag hats, I got red and green ones from Walmart and glued felt patches I made onto them.

Terra, I was totally worn out because the party happened during interview/surprise house guest week. I didn't get a ton of help. Mr. Ashley helped with the pinata and my mom helped the morning of, which took a huge load off, but I did most of the crafty stuff on my own.

I'll do a Mario party tutorial one of these days. I found some cool places on the internet that helped me get everything together fairly easily.

I did dream in 8 bit after cutting out all of those ? marks.

This is so WEIRD...we are doing a Super Mario Bros. party at the end of September!! Have any tips or tricks?! (Like where you got the cute question mark prize bags!) I love the hats, too, we'll be getting those!!