This weekend marked the very special occasion of our 12 year anniversary.

We chose to take the kids to Disney World. Where we experienced a freak cold front and were forced into buying $40 Mickey sweatshirts. And my flip flop broke 5 minutes after arriving, so I got to rock some Mickey flip flops too.

We were supposed to go to a water park but got rained out. We were supposed to have a nice dinner at Downtown Disney but again, the pouring rain canceled those plans. We ended up at Medieval Nights. Where we ate meat with our fingers and watched a show comparable to Wrestlemania but with horses and swords.

We spent a lot of one day locked in a hotel room with two wild kids. Mr. Ashley knocked for re-entry at one point and I pretended the security guard was with him, just out of sight, asking us to please be quiet and quit jumping on the beds, more for my own sanity than out of consideration for other guests. Later in the day, little kid locked himself in the bathroom and insisted he wasn't coming out because he was tired of being in trouble and demanded that our behavior change, when he was the one acting like a monkey on meth. We refused to change our behavior and insisted he stay in there.

We looked at each other around that time and said, "Remember the last time we said we were never celebrating our anniversary with them again?"

That was the time one child spent the entire dinner show at a Japanese restaurant stink-bombing the bathroom so bad that people were just turning around and leaving upon entering. Then when we got back to our food, the other kid barfed all over our shared table and down a hallway.

We can pretty much never go back there.

But that was a few years ago so we forgot. We always forget because we love them so much...but while locked in our hotel room, I pointed out that if we were at The Standard in Miami, we wouldn't care if it was raining. That our feet wouldn't be sore from walking, that they would be getting massages from beautiful people in a luxurious room together, and lounging around in the heated marble hamam, and taking baths on the hotel room's patio. That there would be no kids. That no one would be locked in our bathroom making absurd demands.

At one point, while hugging and reminiscing about what we were doing 12 years ago at that time, little kid came and hugged us, making sure to wedge himself in between us.

"You do not belong in that hug, little kid!" Big Kid shouted.

"I belong in this hug! It's my anniversary too!" He replied.

We rolled our eyes and laughed and whispered "Never again!" and we mean it (at least for a few years).

But despite things not going as planned, it was still wonderful. I love being at Disney World because the boys are so happy there, and now that they are older we have a blast on the roller coasters and maneuver easily through the park.

Medieval Nights was hilarious--an accidental treasure. I would have never chosen that, but we had so much fun cheering, and as a mom of boys, I'm embarrassed to admit that Wrestlemania is kind of right up my alley these days.

Those cheesy Mickey hoodies? I just bought myself the same hoodie the boys got...so the three of us wore matching hoodies all weekend. When else could I get away with something so ridiculous? We loved it. (I did, at least. They didn't mind.) 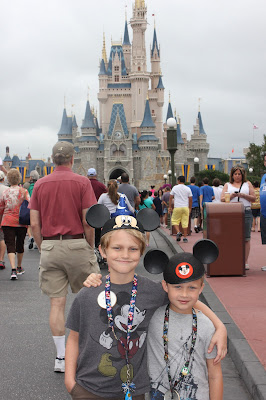 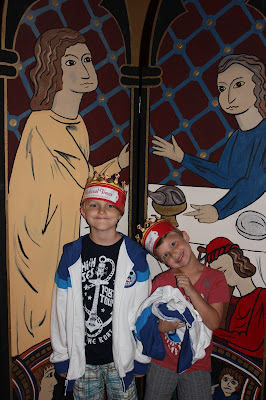 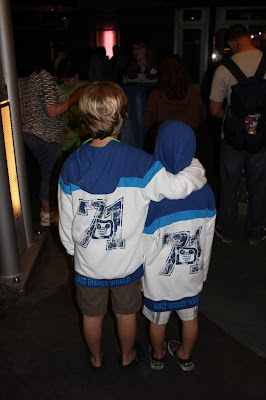 But next time I'll be at The Standard.
Posted by Unknown

Email ThisBlogThis!Share to TwitterShare to FacebookShare to Pinterest
Labels: memories can be made on days that aren't our anniversary

Awwww.... Happy Anniversary! That sounds like how a lot of our family vacations turn out!

Jeez, woman. Even *I* remember your anniversary when you took them to the Japanese restaurant! And I don't even know who you are, what you or your husband look like, or any other pertinent information about you. hahaha

I love your writing. It always makes me laugh. Hope you enjoyed your anniversary! We live outside of Tampa and are from Polk County, and Disney is a favorite place to visit on special occasions, too! But I probably won't bring my 2 year old with me either :)

I'm pretty sure that all the crazy things you say little kid does are lies - his face is so innocent and angelic, lol. Then again those are the ones you need to watch out for.

Happy anniversary to you, your husband, and apparently little kid.

Congrats on the anniversary! (commiserations on the break?)

Thanks for making the dumb, crazy things that happen in my life seem normal!

I'm pretty sure I saw an "Arabian Nights" show at that horse thing a while back. I went to Disney with choir when I was 14 and we had dinner there and being the daughter of a horse fanatic and a sap, I cried like an ass. I've wanted to take my mom down there for that ever since.

But yea... even I remembered the Japanese restaurant, haha. That was "a few years ago"?! Lord, how long have I been reading this blog??