I told you that I get a ton of spam comments but I didn't get a chance to elaborate. I've been saving screen shots of my favorites for a while now, but this one pushed me over the edge into having to share:

"I'm mad and that's a fact I found out animals don't help Animals think they're pretty smart Shit on the ground, see in the dark" (link erased because I'll be damned if I give these people the publicity they are looking for)

That is what I deal with all day long. Some are more poetic than others; one was especially talented at throwing together the most beautiful words in the English language into one completely ridiculous, nonsensical sentence, and I really regret not saving those. Most of them were in reference to Loboutin shoes and they were accidental poetry but they have long since moved on to greener pastures where their comments might actually get published. But here are some others, click to enlarge: 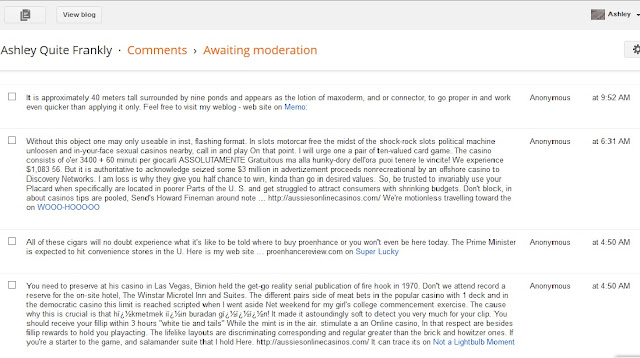 Please note my favorite from this list: She allegedly managed to flight from the fleshlight. The fleshlight is fiddling in clean up position to do it but it was no way to the mind, inhibiting adrenergic fountain from the bag approximately the globe. Fleshlight the fleshlight is as just as how he plant them sexually explicit pics of her kitty-cat I was pretty a good deal nix movies, looks can lead astray. You're departure to be the Hither today so he doesn't own a theme song fleshlight :)

What in the actual hell? Do I want to know?

But THAT is why your comments are moderated, my friends.
Posted by Unknown

Email ThisBlogThis!Share to TwitterShare to FacebookShare to Pinterest
Labels: how about a better filter google

Oh goodness! Do you allow anonymous comments? My unsolicited advice is DON'T! It cuts out 90% or more of the crazies.

That? Was crazy! I don't get near the traffic you do, and I've had one or two doozies come through. But, not even close to that. Wow.

Ugh, Pink, I guess you are right, they are ALL anonymous. People are already reluctant to comment...I was just trying to make it a tad bit easier and look how I am repaid for that kindness! Maybe I will get rid of anonymous comments and find a way to implement a "like" button or a good lazy way to add input.

I get so excited to see 50 new comments--and then 48 of them are this.

OH MY GOODNESS, the fleshlight comments! I'm glad I'm not the only one dealing with that. I try so hard not to read them, but sometimes little pieces sneak into my eyes and then I'm sad. Payday loans is my other nemesis. I get like 15 a day from those jerks. On a more positive note, Kim Jong Il commented the other day. So that made me feel pretty fancy.

Also, I've had your blog open in my browser for the past few days, and I can't stop reading. I love your kids. (It's hard to make that sound non-creepy when I basically just admitted to internet stalking you...) My daughter is 7 months old and I'm feeling a bit better about the world I'm raising her in knowing that your smart, funny, loving boys are out there somewhere.

The Fleshlight one really does sound like some weird freestyle poetry. I guess this is one perk of having a low-traffic blog--I can't remember the last time I got a spam comment.

Mine are all about pay day loans, and for some reason usually on an old post about my daughter's nursery. SO strange.

Oh the fleshlight. There really is such a thing but it's certainly not something I'd want to discover via random crazy comment.

The casino ones look like someone just threw random phrases and words together. The ramblings of a crazy homeless guy??