This has been the craziest holiday season ever. It's Christmas Eve, and I still don't even own wrapping paper. I'm hosting this year too...hope people are ready to sit on laundry and eat cookie dough straight from the tube because that's about what I can offer at this point.

(Just kidding, in a desperate and heroic act, I took all of the laundry to the laundromat to catch up. While there I was invited to have a Corona, to go out salsa dancing, and proposed to so that was exciting despite having to turn all of those kind offers down, since I had the kids with me. My guests will sit on clean laundry, though, at least.)

Friday was a completely exhausting day, I had little kid's Christmas musical (so sweet. I ugly cried as is tradition), I had to assist a yoga class (I did okay but felt like a creepy weirdo because getting all up on sweaty strangers will do that to you), and ended up with three amazing job opportunities--all unrelated to one another and completely out of left field too. I feel grateful but also a little bit like, "Whoa there, universe! Slow down!" I still haven't figured out what to do about these job offers, but it's a nice position to be in.

Then once I finally reunited with my couch, Mr. Ashley walked in. He was carrying a plastic bin. Inside of the bin was my Christmas gift: 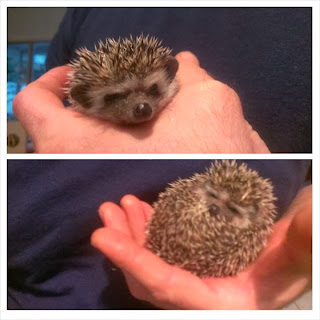 To say she was a surprise would be a ginormous understatement. She was such a surprise that it took a few minutes to get myself together enough to express joy because my tired brain was too confused to make the right faces.

I named her Lola Artemis. She's only 6 weeks old, and she is teensy and sweet. No one but me likes the middle name Artemis, and I like that, because it proves she is MINE. I love her! So do the cats.

I know a lot of you have been wondering about our elf, Harold Hubert Piggybottom. To be honest, in my heart of hearts, I was kind of hoping he would die in a tragic reindeer-related accident this year. I asked the kids what they thought about Harold this year--would he come or was it time to let him move on to another family? Big Kid agreed it was time to let him move on. little kid got upset and swore it wouldn't be Christmas without him.

And little kid got his Christmas wish, late because Harold works in the mail room and those elves don't get as much time off, but Harold did come...in like a wrecking ball: 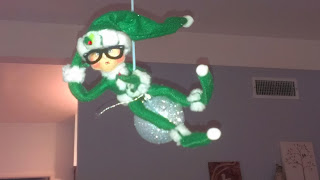 He carried a note: 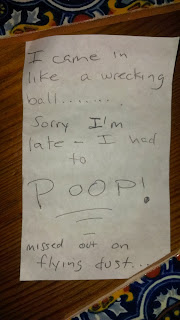 The next night he was good, just hanging out with Lola. But maybe I forgot to take a picture. I might have been super tired that night.


But then he saran wrapped the toilet, which could have been a disaster had little kid had one of his sleep walking episodes. 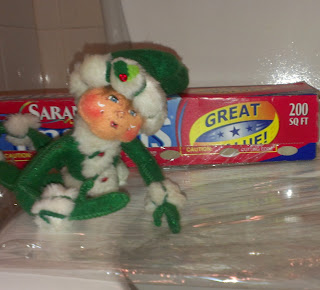 The night after that, he used my cell phone to take a sELFie. Weirdo. 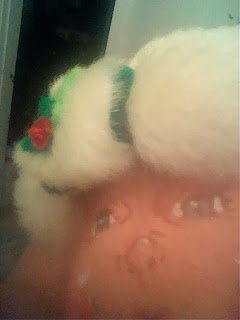 And then he insulted Big Kid by replacing him in the family Christmas card: 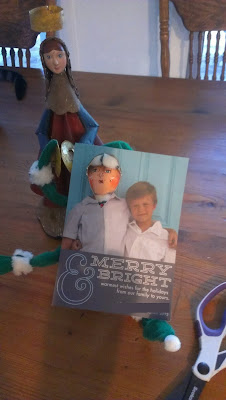 The night before Christmas Eve, Big Kid mentioned that they hadn't gotten the videos about whether they were on the naughty or nice list. He seemed genuinely concerned. I was surprised. I looked at him searchingly and said, "Surely, you know? That you're on the nice list, I mean." Seriously?

He had been pretty non-committal about Santa and Harold this year, avoiding much talk of either at all. I thought that was pretty typical at this wise old age of 10. I'm coaching that team of kids at Big Kid's school and one of them mentioned that he didn't believe in Santa and another quickly agreed. I immediately interrupted and said we weren't discussing people's beliefs right now. Another boy piped up that it couldn't hurt to believe and several kids agreed. My own children remained quiet on the subject.

Between assisting another class, a meeting, and a work shift, I was at the yoga studio from 10 to 5:30pm on Monday and had friends over for dinner from 6 to 9ish. I was so beyond tired that night. I wanted my bed desperately.

It was also Harold's last night. Big Kid still didn't know if he was on the naughty or nice list. 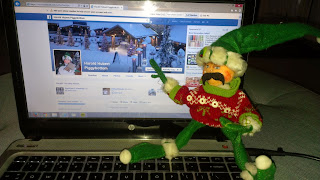 But, alas, the next morning, Harold had grown a creepy mustache and set up shop near my computer. He even had his Christmas sweater on, a Christmas Eve tradition that he probably almost forgot about until the middle of the night. And oh my goodness, he had a Facebook page! And on that Facebook page, were the kids' videos from Santa.

They gathered around me on the couch, early in the morning, and watched with great anticipation and palpable relief when it was revealed that all was well, and they were on the nice list.

In this exhausting, rushed, overwhelmed, always behind holiday season, it ended up being a precious Christmas moment for me, that I will probably cherish always. Maybe one of my last like this, with this little bit of magic, as they grow.

So I'm glad Harold Hubert Piggybottom didn't die in a fire, after all.

But there have been rumors that he may retire next year.

I hope you all have a Merry Christmas, and even more important, a relaxing one.
Posted by Unknown

Do you still have Reggie the Hedgie?

Well, I for one certainly hope he does not retire! What will the rest of us non-creative types do without Harold's antics for inspiration?

What do you do with the hedgehogs? Kind of like a hamster?

Yes, what about Reggie?

Poor little Reg died last year, I believe of something called wobbly hedgehog syndrome. It was really sad and hard for me.

They are kind of like hamsters but cooler, cuter, and less likely to bite.

Cassadie, little kid is already talking about when he comes back next year. Ugh.

Your hedgehog is adorable. Kind of makes me want one again. The hedgehog of my youth was named Poke-a-nose. She was pretty awesome, until she had babies. Then, she was mean as a snake. (I can relate sometimes.) And, the wrecking ball elf was pure genius.