I don't know what little kid did to piss off the Baby Jesus, but he got the stomach flu for Christmas. It was one of the most pathetic sights I'd ever seen; he plodded out to the Christmas tree on Christmas morning, took in the miraculous sight of all of those presents....and fell on his knees and started dry heaving and gagging. And then he barfed. Poor guy had to open up his gifts with a puke bucket next to him.

Regardless, it was a magical Christmas.

Around 5:30 a.m. I heard thumps, scraping and paper crinkling from the family room. Certain that Big Kid had woken up and was investigating or the grinch himself had come to steal Christmas (because a feverish little kid was next to me in bed speaking in tongues about Santa, so I knew it wasn't him), I got up and crept out of my room.

There was Big Kid, lit softly from the glow of the Christmas lights, looking impossibly tall in his new pajamas and holding a plastic grocery bag full of his own carefully wrapped gifts that he was thoughtfully arranging under the tree. He turned and saw me, eyes glossy and cheeks flushed with excitement and motioned toward the Christmas tree full of gifts, telling me that Santa had already come and that he couldn't believe he had forgotten to put his gifts to us under the tree the night before.

I think it will go down in history as one of my favorite Christmas memories; that among all of those brightly wrapped new things for him, he was thinking about his gifts to us and was excited to contribute to the pile of presents.

I forced him to go back to bed with me but after 5 minutes of him rigidly lying next to me and disturbing the quiet with his occasional excited whisper, I told him to go lie on the couch and read something from his stocking for 20 minutes or so and then to get back into bed. He scampered off happily.

I woke again an hour later, noticing that he was not back in bed and found him stuck in a kitchen bar stool.

"What are you doing?" I asked.

"I'm stuck in this bar stool. But read this stuff Harold left!" he answered, waving excitedly to our elf satisfaction survey, behavior summary report and the note on the kitchen island in front of him.

"You're stuck??" I tried to tug on him from behind but he was indeed stuck. "How long have you been stuck?"

"Were you going to call for me? I feel bad that you're stuck."

The kids loved their gifts; even poor little kid who stayed curled up on the couch, too sick to play with any of his toys. At one point he told me, "When I think of the presents you got for me, it makes me feel warm in my heart." That made me feel so warm in my heart. It made the sub-human conditions at Toys R Us worth all of the trouble.

They were also extremely proud of what they had gotten me. Big Kid bought me a singing snowman figure and a clip-on light.

"This will be perfect for my Nook!" I exclaimed over the light.

"Oh, I didn't even think of that! I saw you could clip it to your clothes or your car visor and I thought you could use that to have light wherever you went but it would be good for your Nook too!"  (To his future spouse--I apologize for the practical presents in your future.)

little kid bought me a set of soap and lip gloss and swoons over how pretty I smell every time I get out of the shower, pumping me for information on how enjoyable the shower was and if it was the soap he bought that made it so wonderful.

They are grateful and generous little souls.

There was brief sadness over Harold's departure but he left a note that said:

"Love you guys lots, but it's time to go. Don't forget about me and have fun in the snow. A Merry Christmas to you, all smiles, no tears, and please do not worry for I'll be back next year! (Like it or not, mom!) Laughter and Love, Harold Hubert Piggybottom."

Big Kid was relieved to hear he'd be returning. He had left Santa a note that said:

Dear Santa,
Thank you for bringing Harold. I really had fun with him. Can you keep me a promise??? Please bring Harold back next year. I liked Harold.

and yesterday wrote Harold a note that said:

I hope you have a good new year. I will always remember December 1st, 2010.

Big Kid rated Harold a 3 out of 5 on the elf satisfaction survey. He may love Harold, but won't rate him more than average. His sense of honesty just won't allow it.


Harold did leave them a marble run set (120 pieces--thanks a freaking lot, Harold!) and a big pile of snow. Pretty magical for Florida kids: 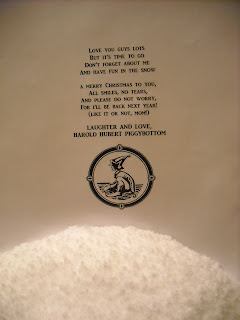 On Harold's last days, he: 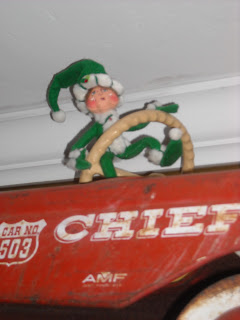 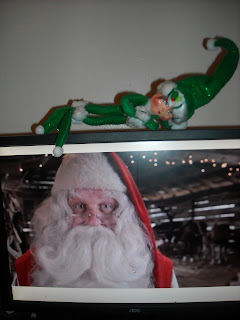 Sent a personalized message from Santa. 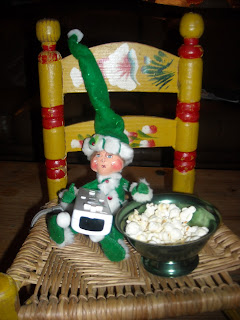 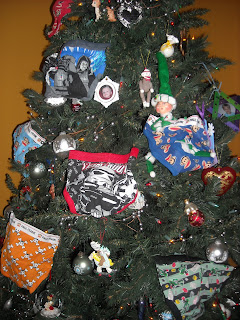 Covered the tree in new underwear. 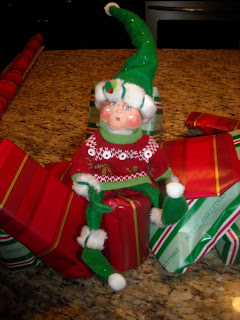 and wore a Christmas sweater for Christmas Eve. He looks good, doesn't he?
And Christmas in my Christmas-crazy neighborhood? Was breathtakingly magical. Everyone lined the streets with luminaries and there was singing, and outdoor fires (not from the luminaries, fun and safe outdoor fires that were there on purpose), and even a 10 piece brass band. It made me understand why they are all so Christmas-crazy. 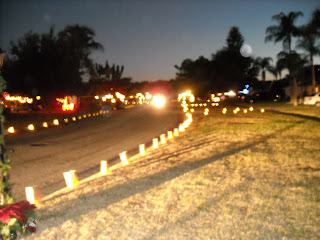 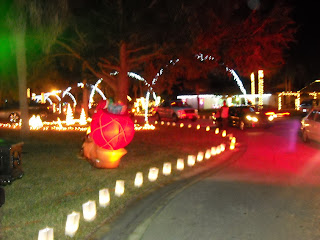 And that concludes Christmas.
Although it was magical, I'm kind of glad that it's over.
Posted by Unknown

Poor Little Kid! Your kids are awesome and I love how thoughtful they are to give you gifts that you like. Very, very sweet! Merry Christmas to you and hope you have a fantabulous 2011!

I love everything Harold did.. how sweet! Your kids are so sweet, too! My big kid bought my gift at school and promptly lost it before he got it home.

Great post! I laughed so hard although I feel really bad about little kid being sick on Christmas - that royally sucks. You had great ideas for the elf - really, your kids are very lucky!
(P.S. I'm glad it's over too)

Poor lk. My 9 y.o. had the pukes on Christmas AT Grandma's house in Iowa a couple of years ago. Couldn't play with the cousins. It was sad.

He has that same Paul Frank underwear. I wish it would fit me!

poor LK hope he was on the mend soon and able to cause lots of crazy destruction with his toys.

I am hoping the marble thing you got isn't the same marble thing my son got cause OMFG that thing is horrid to put together! I gave up and it was only 80% done but son was fine with it, he made it work.

I got a Nook for xmas also now I just need some great suggestions on reading material.

You weren't kidding with those crazy neighbors were you!