So, I was just downloading birthday photos and they made me cry. This one in particular: 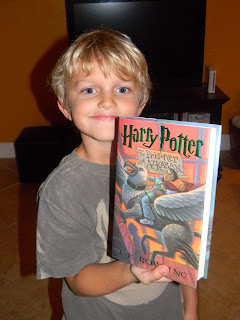 He on his 5th Harry Potter book of the summer. It seems like just yesterday (and I know that's a cliche but really--feels like no more than a month ago) that I read Steinbeck's East of Eden out loud to him as a newborn because I didn't know what else to do with him. Now he's staying up until midnight reading 800 page novels that I haven't read.

He kissed a girl this summer. Despite me telling him specifically that kissing girls was not allowed. He did it anyway. And he liked it. And he got caught (because as a girl, she had to blab about it and her mom called me). And I could tell it was worth the little bit of trouble he got in. Ugh. I'm afraid he's humoring me when he agrees that there will be no more kissing until he's 16.

He's going to be a 3rd grader. I remember being a 3rd grader--how could I possibly have one? In 3rd grade, Catfish and I snuck out of Mr. Eder's class to hang out in the bathroom and waste the paper towels and soap. 3rd graders are officially real people and not just little kids (not that wasting paper towels creates that distinction).

How do I make it stop? Don't even get me started on little kid, and the fact that my baby isn't a baby at all. Every inch they grow squishes my heart a little harder and they won't stop growing.

And where the hell did summer go?

Email ThisBlogThis!Share to TwitterShare to FacebookShare to Pinterest
Labels: i made people

He is so smart. I still don't get multiplication, and that wasn't a concept we were taught until the fifth grade. I remember because it was my first failing grade ever. Stupid math.

Wow that's just amazing! My son is the same age and he's one step above the cat in the hat :/

I feel ya! My "big kid" will turn 8 on August 30th and is going into 3rd grade as well. I can't believe I am the mother of a3rd grader either and, although my son is nowhere near kissing girls- he is also reading the HArry Potter books this summer and I am amazed at that. it all started because he wanted to watch the movie and I didn't know if they were too scary and dark for him, so I told him if he read the books and then still wanted to watch the movies, I would let him. He got right to it- he is only on book 4, though ( he also got my hand-me-down iTouch as his birthday present and has been preoccupied with Angry Birds)

I know how you feel. Mine turned 9 this summer, read all the Harry Potter's, started riding bikes around the neighborhood with his buddies and not me! When did he grow up and how can I keep him little?

I totally understand. My daughter is 7, and starting 2nd grade (got her first kiss last winter. Grrrr) She's read 5 chapter books in the last two weeks.

Too bad we live so far apart. BK and Miss Gi would be a lovely couple. They could be intellectual together. She maxed out the school IQ test as well and they stopped testing her when they got to high school reading levels. She did the entire 4th grade math book over the summer. She read all the Harry Potter books and loved them. She just turned 9 in June is going into 4th grade next year... Kerry