As some of you may know, we had a summer bucket list to complete.

It had a lot of stuff on it...this year's bucket list will be shorter. And more relaxing.

One of the items on the list was to investigate the local lore of the Skunk Ape, a creature that may or may not live out in the Everglades.  We researched some of the stories and watched a documentary on the Skunk Ape, collected some vital supplies, and set out to the Everglades to learn more.

We pulled up to the Skunk Ape Research Center in Ochopee, Florida which is truly the middle of nowhere. It was summer so you could see the clouds of mosquitoes, it was 450 degrees Farenheit, and there were drowning deaths from people trying to breathe the humid air. Not really, but I'm setting the scene of the Everglades in summer for you. Anyone with  half a brain doesn't go there on purpose.

But there we were! 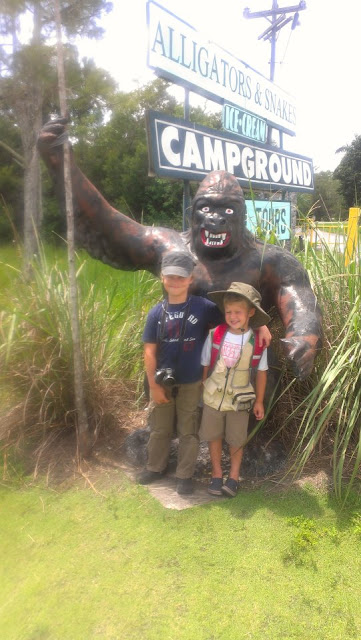 We walked into a gift shop and I immediately saw the famous Skunk Ape spokesperson, Dave Shealy. He introduced himself, with the slow easy drawl of a true Florida cracker and a wide smile. I explained that we were there to research the Skunk Ape and he was quick to clarify that he was "the" expert on Skunk Apes and introduced himself again, promising to give us a personal tour and go over his private information with us. He smiled at me appreciatively and I wondered if he was checking me out.

They had some animals in the back you could pay to see and I inquired about admission.

"You from around here?" He asked, leaning against the counter, clearly in no hurry.

"Kind of," I went into detail and he considered that and nodded.

"Hmm." He said. There was an uncomfortably long pause.

He paused again, studying me closely and holding eye contact. "Well...I hate to charge such a pretty lady," he stopped again, maybe waiting for a reaction.

I was feeling amused, awkward, and delighted (hey, I'm old and boring and this situation was clearly harmless and potentially hilarious). My kids were right there, I wondered what they thought.

"Well, sir, you are running a business," I said with a nervous laugh. "I fully expected to pay."

I counted out the money and laughed as I did it.

It was well worth it. Our tour guide (Dave handed us off, with a promise to meet back up later) was an interesting guy who loved the animals. There were giant snakes and he excitedly pointed out one that was eating a guinea pig; my kids were disgusted and he seemed disappointed. He let them feed a tortoise and tossed frozen rats to an alligator in front of us. He held a scorpion and let them hold a baby alligator and snakes. little kid was in heaven. Big Kid was a good sport. Rick had some great stories. 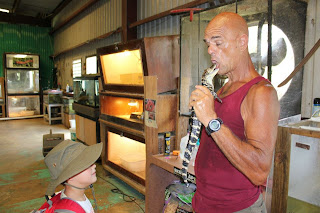 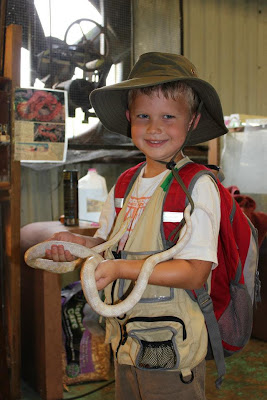 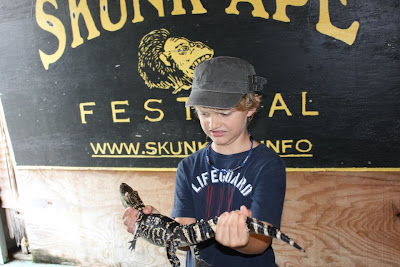 We finished looking at the animals and went back to the Skunk Ape man himself, and at this point I was ready for some official data. He showed us some videos and told us everything he knew about skunk apes. He also told me about his many television appearances and possible Hollywood deals in the works. We spoke seriously, with him answering the many questions of the children and with me keeping a completely straight face while we discussed giant mythological swamp monkeys and his life work.

Being alone with the kids for this was a trip--I had no adult to make "WTF" faces at, no one to giggle with behind turned backs, no one who could validate what a strange experience this was.

Dave turned and picked a field guide off of the gift shop shelf and slowly and methodically freed it from its shrink wrap and then just as slowly fished a pen from his front pocket and then in slow, shaky handwriting, he autographed it for us. We hadn't asked for an autograph, but it was an extremely nice gesture.

He asked where we were off to and I told him we were going to Turner River Road to investigate. His laugh was genuine and so was his concern that we be careful, stay in our vehicle, and avoid the alligators. That was my plan all along. He took a look at the beans we brought (Skunk apes love beans. We brought 15 bean soup) and told me about the time he was on The Colbert Show. I told him I saw it. I could tell he liked that.

"You should get a field cam, like a hunting camera," he offered. "You do that and come back here and I'll take you out to my hunting stand and we can catch some more footage. You can stay at the campground I run. You and your husband,"  he added.

I told him that was something to think about and after a round of photos to commemorate meeting a legend (and a heck of a nice guy), we departed for a popular Skunk Ape sighting area. When we got back in the car, little kid asked if I knew that guy.

"Hm. He acted like he knew you," he said in a questioning tone.

"He also acted like he knows the Skunk Ape," I answered. 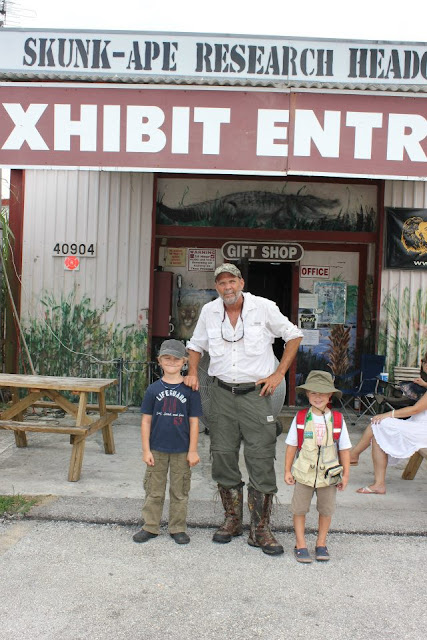 Now believe it or not, here is where it got scary. Out at Turner River Road, we really were in the middle of nowhere. Even more frightening was that there were tourists out there too because I guess it's a popular alligator viewing site. Why you'd go out of your way to view them, I don't really know.  But these tourists were getting out of their cars and walking within 5 feet of alligators sunning on the banks, not even a guard rail in between them. Multiple car loads of people doing this to multiple alligators (there were dozens). I had to drive until we couldn't see any other cars because I didn't want my children to witness one of these dumb asses being mauled. 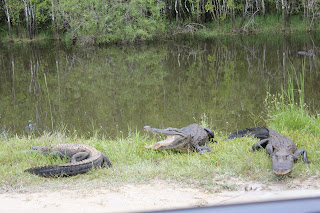 So we sat on the side of the road all alone in the middle of the Everglades, surrounded by alligators, looking for a skunk ape. We threw some beans out and quickly rolled the windows back up, peering into the woods. At nothing. We sniffed the air because apparently they smell horrible. Nothing. For 10 long, slow, miserable minutes.

Except little kid ended up seeing 11 Skunk Apes that day. Which is remarkable because the Skunk Ape legend himself only estimated 7-9 in existence. It was a good thing he saw them too, because I was getting irrationally afraid of running out of gas or cell phone service out there, surrounded by alligators and idiots. After much protest from little kid, I promised we would get a field cam and come back.

But I'm a big fat liar, because we won't.

On the car ride home, I asked what they thought about the existence of the Skunk Ape based on the evidence we had seen. "What do you mean? I saw 11 of them!" little kid said emphatically.

"Remember how the first person to spot one happened to be the owner of an air boat tour company out there in the '60s? In that itty bitty town in the middle of nowhere with not many business opportunities? Do you think anyone had anything to gain with tales of a mysterious creature in the area?" I hinted.

I always wanted to be Daphne in Scooby Doo but we know I would have been Velma.

"Maybe. But that guy we met today sure seemed like he saw some skunk apes," Big Kid mentioned.

"He sure did," I agreed, again regretting not bringing another adult along as a witness to the day's insanity.

So, I guess you could say our research was inconclusive.

And is very likely to stay that way. 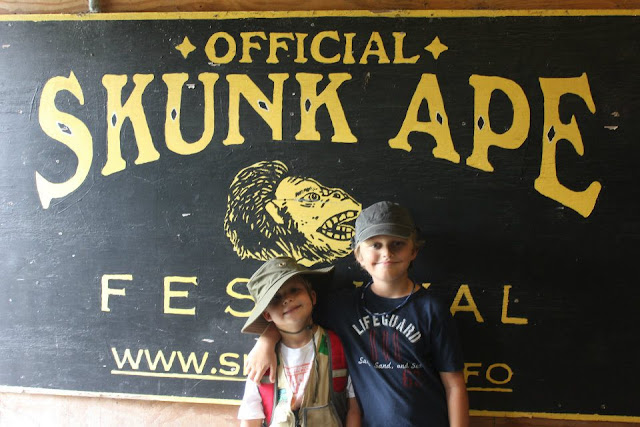 Email ThisBlogThis!Share to TwitterShare to FacebookShare to Pinterest
Labels: told you I won Mom of the Year 2012

You are the mother I aspire to be. What a great field trip!

You are too much! Such a good momma.

I grew up in Ft Laudy and have never heard of the Skunk Ape but we did have Chicken Foot. To this day I cannot listen to the Indigo Girls song Chicken Man simply because it sounds too much like Chicken Foot.

It freaks me right out when tourists do things like that! I was in Banff (I'm from near there) and saw a circle of Japanese tourists around a HUGE male moose, just snapping pictures and standing like ... within goring and trampling distance for sure. Just cornering it within town limits... luckily the police showed up and moved them along.

That picture of Big Kid holding a baby alligator....I laughed out loud. I can't believe you were willing to take them to the Everglades in the summer!

what a great adventure! i hope that we can have one too! my son will surely love it.