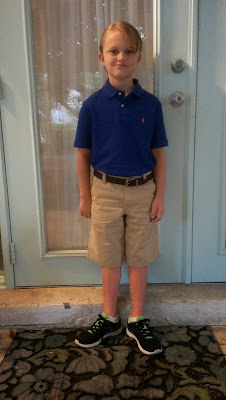 The second first day was Monday.

He has to wear a uniform now. His school day is actually slightly longer.

I was really nervous. He seemed fine.

The principal's wife emailed me the night before and said they were excited to have him. The president of the PTO called me the next morning and talked me into coaching an Odyssey of the Mind team. Remember how well that went last time? Remember how I was rejoicing at not having a regular volunteer position in either classroom this year? My desire to be liked knows no limits and has no common sense. But hey--I was about to home school to get out of that last situation. A few afternoons and one long Saturday in exchange for my day time freedom seems like a decent trade.

(I will complain about it often and loudly, though.)

When I picked him up and asked how his day was, he said, "Fun. It was good, and fun."

It's easier to get information from jail house snitches and prisoners of war than from my kids about their school day.

I met his teacher in the car rider line and she said he did great, that she enjoyed having him, and with a wow-type look on her face, added, "He is great at math!" I found that particularly interesting since they're doing the same math but in a different style (can I go on record as saying every math "style" is stupid?) and since she has no idea why we switched to this school. He was beaming.

I eventually extracted more information from him, and in reviewing his homework was impressed to find a long-term social studies project where they came up with a personal research timeline and signed a contract stating that they understood the professionalism and effort expected. This kind of stuff is worth the hassle, not a mountain of math work sheets.

Today was day two and he seems so happy and relieved. He says he has no doubt that it was the right move.

I'm glad too. Except for the volunteering and stuff.
Posted by Unknown

Email ThisBlogThis!Share to TwitterShare to FacebookShare to Pinterest
Labels: i'm a slow learner, it's my own fault

I've been considering a like button! I think it would help improve relations between myself and the non-commenters. ;-)

I'm just lazy and don't know how, but that's on a to-do list somewhere.

I second the "like" button idea. I'm so glad he likes the new school! A school where we live now has asked me to do some consulting and I have been researching elementary math programs and I'm generally confused by them. I think I know which style he was being taught at his old school and most people agree this is not something you begin all at once as it needs to be taught from the very beginning. I hope everything continues to go well.

I'm so happy to hear that! (I'm a long time lurker who's trying to not be so lazy and comment more!) This new school already sounds a million times better.

ashley, i've been reading your blog for YEARS.. i may have commented once or twice, but the post about big kids school brought me to tears. i'm so happy he has found his place. you are a great mama to fight for your kids!

Another usual lurker who is trying to comment more.
I'm so glad that you made the move, and it sounds like the right one.
At 1st grade parent info night, we were told about another new math program and another new spelling program. What confuses me is that everytime a new one is adopted the teachers are crazy excited and tell us this is the best thing ever. Then a new one comes along and it's now the best thing ever. I know I should be happy they're evolving as learners and teachers, and therefore our kids are too. But it's confusing for sure!

I wanted to add why sometimes I haven't commented in the past. Often I'm on the internet while working (sshhh...) and signed into 2 different gmail accounts as a result. Comment forms used to get really confused with this in the past and I would often get signed out of one of my email accounts-and that wasn't worth it just to leave a comment. But, Google seems to have figured this out, at least. Don't get me started on Disqus though.

I was in Oddessy of the Mind as a child. It's so fun! I encourage you to coach in the balsa wood division :).

Point #1 Teachers secretly refer to worksheets (nicely) as "busy work" & (not so nicely) as "shut up sheets." Basically, throw a bunch of work at the class so teacher can sit down & either get something done or not do anything at all.

Point 2: To get your child to tell you what they did at school, ask specific questions. And this is for any parent, not just Ashley. Instead of "how was your day?" ask "did you have math today? What kind of stuff did y'all do?" It's a lot harder to blow off a specific, pointed question than it is a vague question easily answered with a one word answer.

Hi,
so excited for big kid and you. I have sisters that are teachers and they have said that teaching methods go in phases - it's just the names that are changed. The hardest thing is switching methods midstream for some children - they sometimes can get left behind in the confusion.
Good luck with volunteering - I look forward to hearing the fun stories to come out of it ( that's a nice way to say - go ahead and whinge).
Kind Regards
Cathy

Haven't got to why you switched schools yet but I'd take some volunteering over homeschooling any day.