For my birthday dinner, we ended up at Buca di Beppo.

We lucked out and ended up with a table that had panoramic views of nudity--cherubs with dimpled butts, Michelangelo's nudes, a photo of a buxom woman standing next to a topless statue of a buxom woman. The kids laughed and pointed all evening long. At one point I tried to make them stop pointing, but then they appeared to be staring and laughing uproariously at the bewildered tables around us, so I went back to letting them point and shriek about Cupid's butt.

little kid pointed at this guy and said, "I can tell that photo is old fashioned, from a long time ago." 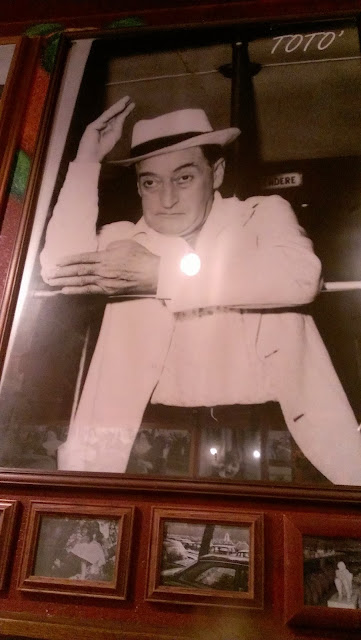 I laughed. "He's not doing the Moonwalk!"

"Then maybe it's the Robot?"

"little kid, I grew up during that time--I know the Moonwalk and the Robot, he is not doing either."

"Well, I know leaning on rails and I haven't seen anyone lean on a rail like that."

Email ThisBlogThis!Share to TwitterShare to FacebookShare to Pinterest
Labels: i have no idea what he's doing

Reminds me of when I went on a field trip with 5th graders to a museum full of nude paintings. One of the kids counted over 100 lol.