Guys, I've had a mini-epiphany this week about how I am "that" annoying person on social media lately.

Ugh. Yoga and having two cats instead of just one has compounded the problem.

On Instagram, I am THE crazy cat lady. Cats, the beach, the occasional kid pic--that's it. Ever. Often. I have to make deals with myself regarding how often is acceptable to post the cats and I really only post the beach or kids so I can get back to the cats. I probably take a photo each day but I try to limit myself on sharing. I also try not to ever harass my Facebook friends with the cats, because they already have to deal with the yoga.

On Twitter, I am THE boring mom who thinks her kids and cats are funny. I really only like to talk about me and I seldom participate in the posts of others. I've been doing it for years and I still don't really get Twitter. It's like a bunch of people talking over each other at a party. So clearly I'm doing it wrong.

On Google +, I am THE confused old person who has no idea what is going on. I only even try to do it every once in a while when one of my jobs reminds me that they'd really like me to have a presence there. But would they want me to have a presence there if they knew that I'm already annoying the rest of the internet? I don't really know whether to go with kids, cats, or yoga on Google +.

And I have a mommy blog. Ugh. The shame. I try not to self-promote and I think I'm great at not self-promoting, maybe a little too good but still, the truth is that I am one of them.

I don't plan on doing anything about any of the above, just wanted to declare my awareness of the situation in case you're one of my many internet victims (and clearly you are, you are reading a mommy blog!)

But I also  really want to tell you that I accomplished 30 yoga classes in the last 30 days, I want to complain about early release days at school (because what asshole came up with that idea, seriously?) and I'd like to share this picture of my cats (I think you will agree that they are extraordinary): 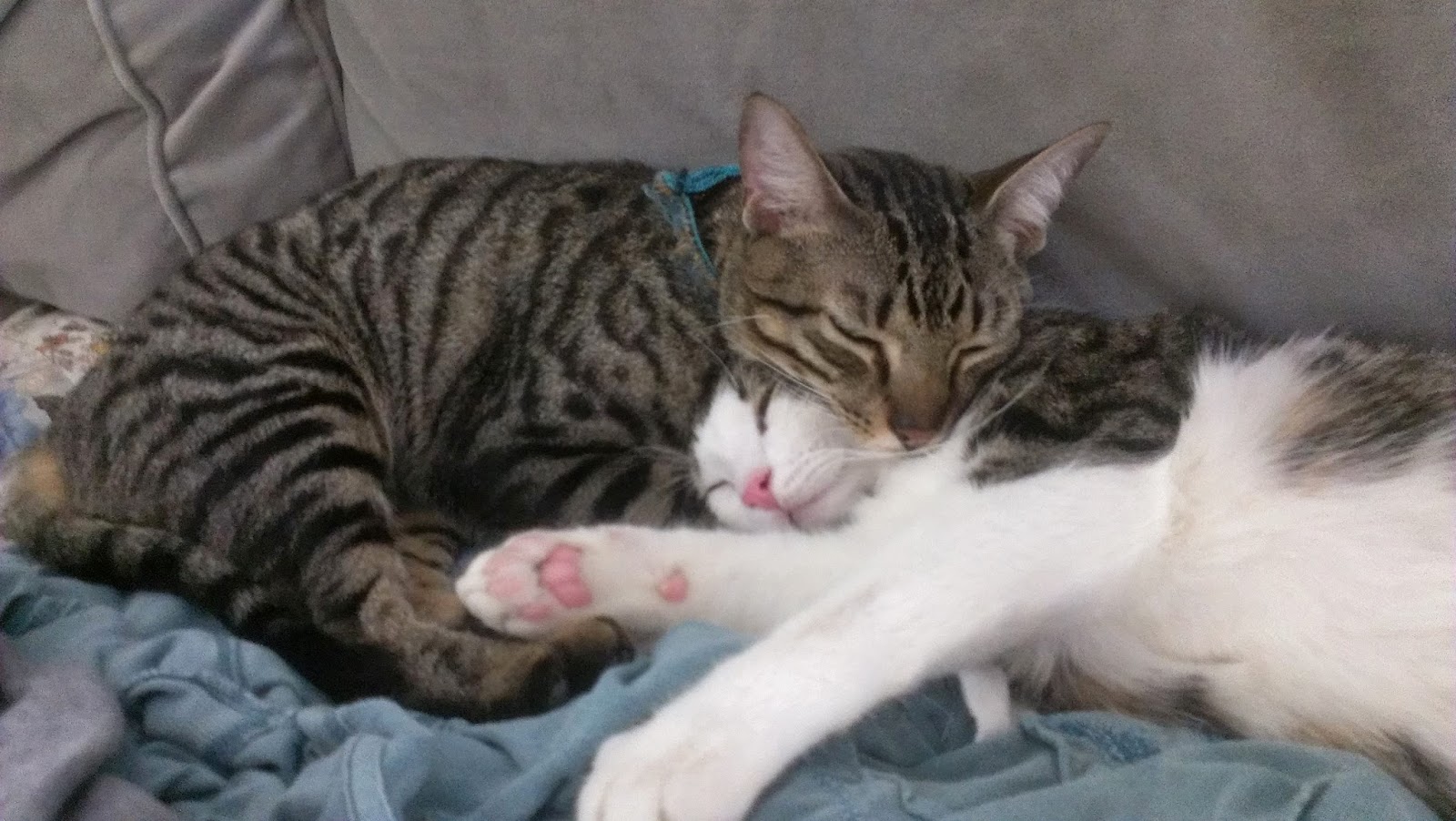 Thank you for tolerating me, internet.

Email ThisBlogThis!Share to TwitterShare to FacebookShare to Pinterest
Labels: and yes they are extraordinary

I have 3 cats...one is an asshole and BITES, one is likely brain damaged and therefore weird and the other one likes to sit directly in your line of sight and lick her butt. And, she's overweight so it's a struggle for her to actually reach her butt to lick it.

And, my 11yo daughter has a bit of a crush on Big Kid :-) She thinks he's brilliant and loves how much he reads.

Okay, that cat picture is insanely adorable. So I kinda get it.

Ive been reading your blog for years. You're great! I'll be invited on the cruise right?

I agree about twitter. I don't really get it. The only reason i have an account is so i can stalk my teenage daughters. They can't know i stalk them or they will set up another account and keep a fake account. Did you know they do that? Yep they do. They are so far ahead of me with technology. So keep on using social media the best you can because if you don't your kids will pass you by!

LOL I'm an annoying person too I'm sure but my way of thinking is if they don't like it they don't have to follow me. AND if they still do and make snarky comments? UNFRIEND ;)

You could post 8 million cat pictures and I would still think you're awesome. :)