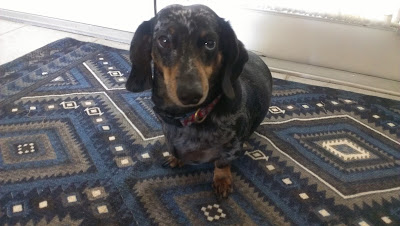 If you gave him the choice between me and the sun, we would all be plunged into eternal darkness immediately. He worships me in a way that only a dog can, with big, soulful eyes (one brown, one blue), a constantly waggling tail, and much to the dismay of both of us, by pissing all over the floor whenever I'm too nice to him.

Recently I bought him a new collar and even though I knew not to speak to him as I presented it, especially not in that super exciting baby talk way, just fastening it around his neck made his poor bladder explode. Then he tries to frantically lick it up. It's pretty admirable, sad, and kind of dumb. But, man, is he sweet.

As much as he loved our white German Shepherd, Lily, he has thrived as the only dog in the house, even more so as an only child when the kids are at school. (The cat doesn't consider herself a child). He watches me all day, waiting for some eye contact or, better yet, a treat. He is thrilled beyond measure when we occasionally go back to bed in the morning (yeah, I do that), and I allow him the forbidden pleasure of sleeping in our bed with me. He stands awkwardly to my side as I try to sleep, staring at me with nervous pleasure and confusion as to what he should be doing. He doesn't really relax or snuggle much. Ever.

We joke that he has social anxiety because, well, he does. He is vigilant in his defense of me, though, and he's obviously good too because I have not been hurt or kidnapped even once since we got him. No one is allowed to walk on our property and since he doesn't understand property lines, near our property either. Especially other dogs, he hates those fuckers. He once had a several month long war going on with an orange, wiry doormat thrown over a firepit that looked suspiciously like a neighbor's Golden Retriever. Every dog, real or imagined, is a potential danger, probably scouting things out so they can move in and steal my attention from him. He acts like Cujo in his ferocity when confronting them from the safety of the back porch, unless he accidentally gets loose and has his opportunity to attack--and then it's a little awkward. There's some hanging back while barking, looking at me nervously, like, "I've got this but you're going to break it up, right?" knowing I will scoop him up and take him back in immediately.

He also hates dancing as much as the kids do, often grabbing my pant leg with his teeth and trying to tug me away from the riled up children and the risks of a broken hip, I suppose. I must really suck at dancing.

Pearl, the cat, tolerates him but asserts her dominance all day long, which must be stressful to someone trying so valiantly to appear as second in command. And she doesn't pee all over herself every time I look at her or bark all damn day, so that's automatic bonus points there. He realizes his inferiority as a dog, tucking his comically pointy snout down when she passes and avoiding eye contact. Every time he comes in from the backyard, she waits on the back porch to jump on his back and herd him into the house which is completely unnecessary and probably demoralizing. But what are you going to do? She's a cat. She's pretty much the boss of everyone here.

As a lover of super soft things, I bought Pearl a lovely minky cat bed for Christmas. She found it in its bag before Christmas and tried to drag it out, choosing to just lay on top of the bag instead. After some hesitation, I finally just gave it to her--and she never looked at it again. In fact, she moved into the dog bed, which he really loved, and his treats and treasures are tucked beneath its cushion. Recently he's resorted to sleeping in a laundry basket with a comforter in it, and I've noticed that in the last two days, she's taken up part-time residence there now, too. What a jerk.

When I took the above photo, I was trying to take a photo of Pearl who was happily lying on the rug until I wanted a picture. Since Murphy was sitting beside me, sweet and compliant, as she paced around frantically trying to avoid the camera, I refocused on him. It made him extremely nervous--he felt like it was his time to shine but as not the smartest dog, he had no idea what was expected of him but was certain it was something. He yawned nervously, and then the cat launched herself onto his face, attacking him before inserting herself as unphotogenically as possible into every photo I tried to take. 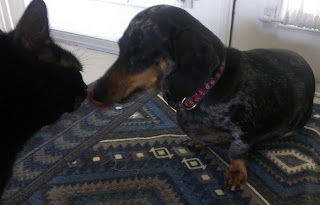 I finally swatted her away and coaxed his sad little nose back up for that one shot before his 15 seconds were up and she returned to steal the spotlight and refuse to have her photo taken. 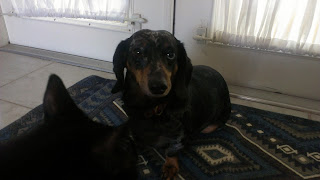 Poor Murphy. Not the smartest dog and not really the boss of anything.

But I love him anyway.

hahahahaha......we have a newish puppy, Axel. He's so devoted to me that he'll crawl out of our bed (yes, it's the only place we could get him to sleep quietly and he is the biggest, tiniest cock-blocker in the universe!) anyway, he'll crawl out of bed when I wake up to pee at 3:30 a.m. and sleep on top of my feet while I'm on the toilet. Then he'll stumble back to bed with me and curl up in the crook of my knees so I can't get comfortable the rest of the night. Where else can you get that level of pure devotion and adoration?!

Love the post! I have a sweet (but dumb) dog too.

This is making me want to run out and get my own little Murphy. I want all the devotion I get from my little one, minus the back talk.

I have a very sweet but dumb dappled dachshund also- ours is named Frank. Frank has the excited piddle also, and prefers that you rub him with your feet- because hands are TOO MUCH! It took him months to figure out that glass is, in fact, solid. Gotta love our adorable dogs!

Crying laughing. I have the female black lab version of Murphy, right down to nervously licking up her pee and letting the cat steal her huge dog bed. She rides the short bus for sure, but I love her to death.