The other day at the beach, I asked the kids if they wanted to go for a walk (my favorite beach activity that is rarely indulged by others) and Big Kid declared he'd like to walk alone with his dad. I could tell he felt bad for asking so I didn't guilt trip him about it but I did feel a teensy bit like, "Yeah, okay, whatever," because I'm the one who likes walks.

So I talked little kid into walking the other way with me. He did, reluctantly, only because I'm really good at finding neat shells and he plans on owning a shelling empire on etsy some day.

In the far distance, we saw a large mound of sand topped with something dark. We decided that would be our stopping point and hypothesized on what it might be. It seemed too round to be a sandcastle, too purposeful to be a regular sand mound and we walked and talked and occasionally mentioned that whatever it was, we were getting closer.

As we approached, it appeared to be a misshapen sand mountain but I walked around it and realized it was this: 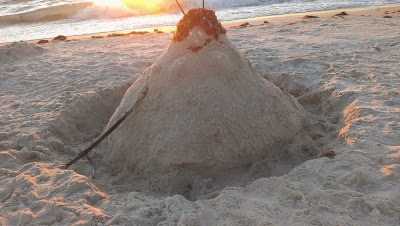 little kid was steps behind me, there was no distracting him now, which was my first impulse. Quickly, I decided I'd take the art work approach.

He stood next to me, smirking. "She has boobies."

"Of course she has breasts, that's how we know she's a woman! It's someone's artistic expression."

He laughed. I laughed too.

"You should add arms," I told him, nodding to a pile of sticks nearby. He agreed, picking them up and jamming them into her sides. He circled her again. 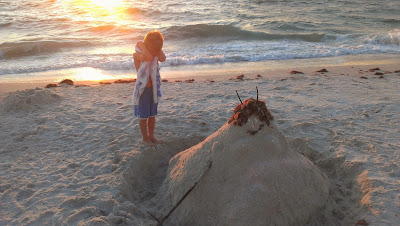 "She has a butt--there's a round sand part on her back where her butt would be," he pointed out. He looked up at me, holding back a laugh, and then crouched down and drew a line with his finger. "I'm just finishing it!" he declared when I looked at him with raised eyebrows. We cracked up laughing and decided it was time to walk back. 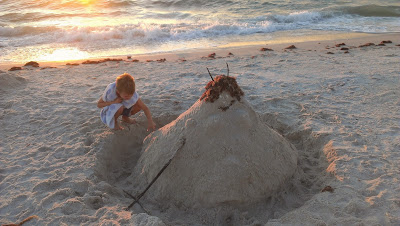 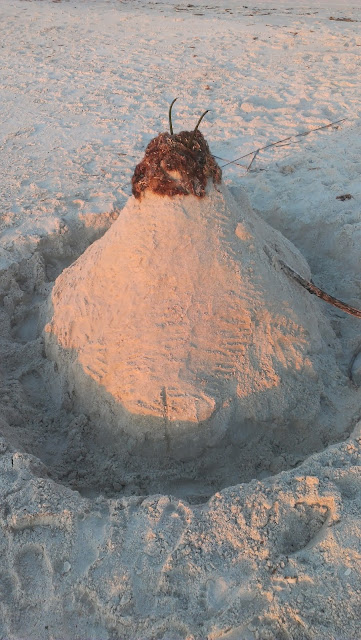 We giggled for a minute and talked about her original sculptor. We talked about how the sea would wash her away tonight, wave by wave. Eventually, we fell quiet and just walked in the very shallow water holding hands.

A family passed, the first people we had seen in a while, and he said, "They look like a nice family."

I agreed that they did. We were quiet again for a moment.

"They're in for a surprise," he added.

We both cracked up laughing again. By the time we met back with Mr. Ashley and Big Kid, he was bursting at the seams to tell them but laughing so hard it barely made sense.

"I was going to put a pile of seaweed back there like poop but I thought that would be taking it too far," he concluded in his retelling of the tale.

Yes, that would have been taking it too far.
Posted by Unknown

Oh my, little kid has to be such a blast to be around. I swear almost every little kid story makes me actually laugh out loud.

Ashley, you are seriously the best mom for writing all this stuff out. Most of these silly moments get lost in the sands of time (Eh? Eh? beach reference!) but you'll have this blog to remind you and the kids of everything.

That's such a fun story. Something I bet he remembers forever :)