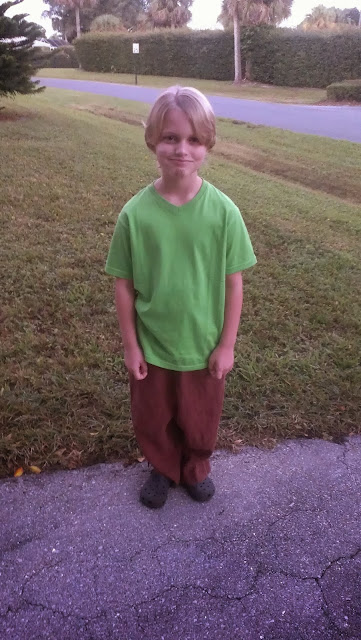 I don't have a photo of little kid in his costume yet, because they can't wear costumes to his school. He couldn't wear it to Big Kid's school either because he built his entire costume around a knife that has blood in it and got a skeleton mask that bleeds, and that's not allowed.

They are trick or treating with friends of theirs (and the friends' dad) in a really popular neighborhood and they are psyched. I'm pretty bummed about it. I kept asking, "Don't you think you might miss...you know, our neighborhood? Me? Maybe you'll miss me?"

And they were all shifty-eyed and "Yeah, yeah, maybe we will miss you but it sure sounds like fun. I mean, we'll see you before and we'll see you after. We could have a little Halloween party when we get home mom, just the family! I think it will be okay, mom, I think it's good for us to go."

I mentioned that the parents said I could join them if I wanted, and they looked at each other and then off into the distance and then to the floor. Big Kid muttered that it was kind of cool how it was going to be all of the boys and the dad and that I could if I wanted but maybe I didn't need to.

So I was all, "Yeah, that's a great idea! Your friends are cool, they're a nice family, and that's a neat neighborhood. You'll have a great time." Without me. Sniff.

I just thought I had another year or two before this would be a thing.
Posted by Unknown

Email ThisBlogThis!Share to TwitterShare to FacebookShare to Pinterest
Labels: so I'll just be at home and stuff by myself is all

Awww....I had the same kind of experience on Halloween! It's bittersweet when you realize that the last time you did *something* with your kids was really and truly the LAST time and you didn't know it - Halloween was one of those. My 8th grader went to her friend's house and they took her little brothers out; then she slept over ON A SCHOOL NIGHT. Did I feel like the radical, anything-goes mom or what?! My sixth grader had plans to go with a neighborhood friend so at least she'd be nearby, but friend's mom asked to take them to her boyfriend's house in town a half hour away. Big sigh. At least the sixth grader slept at home last night...