The other day Big Kid told me that he had left a note for me in the computer room.

When I went to check it out, I found this: 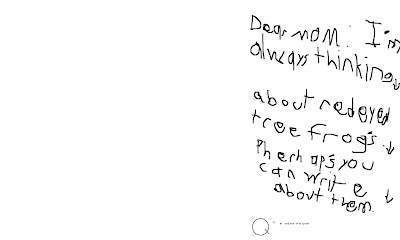 It says:
"Dear mom,
I am always thinking about redeyed tree frog's. Pherhap's you can write about them.

(that part is typed, where the rest was written with the drawing tool in MS Paint.)

This is so Big Kid--a glimpse inside his quirky, obsessed mind and proof that he says weird stuff like 'perhaps'.

Mr. Ashley and I were worried that Zumby may have been left in a hotel in Ft. Lauderdale and were feeling a little sick about the whole thing. Then Mr. Ashley found him while we were moving and I thought the fixation could finally end. But no, red-eyed tree frogs are still haunting Big Kid's brain.

He googles them. He watches YouTube videos of them. He still draws them and talks about them...a lot.

He leaned forward to begin reading and looked irritated. He glanced at me, face scrunched in displeasure and turned back to reading. "Uh..."

"What, Big Kid? You don't like my story or that you have to do the rest, or what?" I was annoyed with his attitude. My idea was a good one.

"No, it's just--What font did you use? It just isn't lookin' good. I don't wanna hurt your feelings, I just don't know why it's gotta look like this...what made you pick it?" He looked mildly disgusted.

"That was just the default font...I don't know what that is, I thought you picked it." I felt confused. It was an unattractive font--but he's six. What six-year-old cares about font? I wrote him a story about red-eyed tree frogs and he's giving me dirty looks over the font?

He looked relieved. "Oh, so I can change it? I was wonderin'..." He quickly switched the font to Arial and started typing the end of the story. (and it did look better.)

And this next part is so bizarre I hesitate to even share it, but he's been saying "say?" at the end of sentences lately...like W.C. Fields or something. "It's a good idea, say?" or "So you like Looney Tunes, say?" I don't know if he's going for a Canadian thing and mishearing "eh?" or what's going on there.

Where would he have heard this?? How did I get a 6-year-old senior citizen?
Posted by Unknown

Email ThisBlogThis!Share to TwitterShare to FacebookShare to Pinterest
Labels: i love every weird little bit of him

I wish I could introduce Big Kid to The Boy. They would get along famously. Bickering about what was better, tree frogs or sharks. That would be an amazing meeting of six-year-old elderly men.
No one believes me that The Boy is always saying "Actually the facts are..." It's kind of amusing, in a freaky way...

I think he is brillant. Even though I think red eyed tree frogs are kinda gross.

Oh Big kid. If I find a red eyed tree frog I will send it his way.

He sounds like the perfect match for my 5 year old little girl. Words like apparently, actually, and inappropriate are forever coming out of her mouth. Her current obsession is meat eating dinosaurs.

Be worried if he starts using a cane. LOL

Totally off topic (or not if you REALLY use your imagination) How's Reggie?

Holy hell, you just jogged a childhood memory of mine about a picture of a frog that I would draw over and over again. I drew pictures of this frog on everything.
Bizarro.

What was the default font?

The default font was called MS Mincho. Kind of blocky but nothing too out there, say?