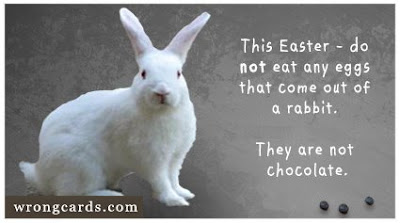 So, tonight we're having a little Easter party and dying our eggs.

If you asked me if I'd rather dye Easter eggs with my kids or get poked in the eye with a sharp, rusty nail...I'd have to think about it for a moment.

It will be messy.

There will be whining.

There will be fighting.

I have already started drinking to prepare myself for the inevitable.

I've also decided not to try to explain Easter in the Biblical sense to Big Kid. Usually I make a point of explaining holidays and traditions (and pretty much everything), but he is just so literal that I'm afraid if I try to tell him that someone was dead for three days and came back to life it would just confuse him big time. It confuses me big time.

He's already very curious about God and still pissed that he took George Washington and dinosaurs from us. When I try to add Jesus into the mix, things get really confusing.

I think in his heart of hearts he knows something is a little fishy with the Easter Bunny and Santa and all of that, but I'm going to leave religion to professionals. I'll have to get him to church one of these days and let them deal with him.

I recently labeled all of this toy bins and made the mistake of putting his microscope set and magic kit in the same bin and labeling it "Magic/Science". Not long after I heard:

"Mom, we have a big problem. Dis says 'Science dash magic' and the science and magic stuff is mixed up in here."

"Mom, science and magic are like practically opposites. You know dat right? Dat science is not magic? It's real--it's science."

I apologized and assured him that I knew the difference between science and magic, I just didn't realize it mattered so much to him. Now I know.

I think he's going to have some serious questions about religion that I will most likely be at a loss to answer, because I have questions of my own.

So for now, we'll stick with the magic bunny who breaks into our house to litter it with eggs and baskets of goodies. Somehow, it's easier to explain.
Posted by Unknown

Wow. I hope my kid isn't that smart. At least not until she gets to high school. I just don't think I'm smart enough to handle it.

Sorry I haven't peeped into the closet as of late. I'm glad to know that things are still goig in Ashley style.

We had fun dying eggs. Get the good and tired (some kids have alleries, that's all I'm sayin'.)

They will usually comply when tired, or you will get the dreaded tired backlash.

That's awesome - science and magic are, like, practically opposites. He is a trip! Happy Easter!

I am SO with you.

Wyatt is asking how the easter bunny gets around the world, I don't have a freaking clue, not like he has flying reindeer or anything.

I say take him to a priest to have it explained. And maybe video tape the conversation for us all. I'd love to see how his little scientific mind questions what the priest tells him.

Yeah, my son is 6 and we've never colored Easter eggs. I think about it every year, but can't bring myself to do it. Messy, crafty stuff (involving eggs to boot) = torture.

Awww, so this T would blow his mind ;)

Thanks for sharing BigKid stories!