Do you want to teach your children about the realities of life?

Are you hoping to raise the next generation's best-known sociopath?

Then you need the Uncle Milton's Gel Ant Farm! 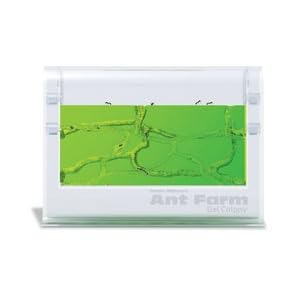 The fun starts when you send away for your new ant buddies. They are FREE with your ant farm! Except for the $4 shipping and handling. Your children will wait excitedly by the mailbox for days, maybe weeks, possibly months! Because they ship them pretty much when they feel like it and blame the weather. It's an excellent lesson in disappointment and gives you the opportunity to explain the absence of the ants every single day when you check the mail.

But one day, your ants will come! (Maybe.) And they might even be alive! (Some of them.)

They suggest that you put the tube of ants in the fridge to calm them down before introducing them to their new home (because they are mean ants that will bite you, much like the free ants in my backyard) but ours were pretty subdued as they marched over the 20+ corpses of their comrades to escape the tube. We only had 4 survivors, meaning I paid $1 shipping per ant.

They looked bewildered by their neon green gel surroundings. They immediately began searching for an exit, completely ignoring the 4 pre-made tunnel holes that had been provided for their enjoyment. I left them alone so they could adjust.

When I checked on them later, one had been exploring! It was now in one of our short tunnels, flailing around, apparently stuck and suffocating in the gel.

"Why is there gel in the ant farm again?" the kids asked.

(Because what was I going to do with him even if I did rescue him? Tunneling is kind of the point.)

His three friends paced back and forth on the surface of the gel, occasionally scrambling up the smooth plastic sides to the curved top in an attempt to escape.

By the next morning, the explorer was dead in his gel grave and another was belly up and shriveled on the surface of the gel. The other two were frantically trying to climb away from the slimy green surface.

We watched for one more day as they valiantly fought to escape their prison. The next morning they were running out of energy and just scrambling at the plastic sides sort of pathetically.

They are non-native to our area but they couldn't breed (no queen) and were facing certain death--so we released them into our front landscaping with a stern warning not to bite anyone.

For us, the Ant Farm of Death was pretty depressing. I scraped all of the gel out and we may fill it with beach sand and try again with free local ants. But if you're hoping to raise the next Dexter and/or want to make your kids cry, the Uncle Milton Gel Ant Farm is exactly what you want!
Posted by Unknown

Well YIKES - that is quite the lesson to teach kids isn't it! Good thing the ants were free (outside of the S&H of course!).

My son got one for Christmas 2 years ago, but we never sent away for the ants. I completely forgot about it until I saw your post... guess we won't bother.

Hmm, we have a similar sort of set up with butterflies awaiting us--they have been sent for! Hoping I don't have to do a blogpost similar to yours, LOL!!

too funny - we had one too. i got the ants in the mail and promptly forgot about them for like a week or two. oops.

I had a friend who had one although I don't think it was Uncle Milton's and they had some success with it. The way you describe it though does sound sad. I'll just let The Son play with the ants outside in the yard, he loves that.

For the butterfly mom, I have a couple friends who recently ordered one of those kits and they've had GREAT success with it. Hope you do too!

I did the butterfly thing and it was grosser than you'd think, but still really cool. Don't go playing Butterfly Midwife though, Mother Nature knows what she's doing.

Caren, I read that people have better success with the Ant Works gel farms and people seem to have great success with the good old fashioned Uncle Milton farm with SAND--since ants like sand.

We had a bad experience with them also...they were delivered fine and did last the 2-3 months as promised...but they never did make tunnels, and in the end they all just sorta blew up...their bodies exploded into this white stuff, really gross...

Mamalicious and I did a 3rd grade science fair project with an Uncle Milton's... but TG it was a zillion years ago, so no gel, but sand. It was actually pretty cool.

I did have a non-fun experience with Sea Monkeys this week. The kids didn't even notice, but they never hatched.

At least your kids didn't accidentally massacre your ants, giving you teasing fodder for the next twenty years. I was five when my parents got me an ant farm, and I really liked feeding them...to the point that they got fat and lazy and didn't move anymore. And you know how Darla in Finding Nemo picks up the bag and shakes it? Yeah...when you do that to an ant farm the tunnels collapse and everyone dies.

To this day, my mother calls me the Darla of the ant farm world, and I've never been allowed to have a real pet.