In an attempt to stay a baby forever, little kid has stopped eating vegetables.

"You're big now! I can hardly carry you now!"

"I not gonna get any bigger. I gonna stay a baby."

"It doesn't work like that. You'll get bigger no matter what but if you don't eat your vegetables, you won't develop properly! You won't be strong enough for t-ball! You won't be able to run fast! You'll have a big head and people will be able to see your skeleton! Just EAT THEM!"

He asks me to hold him probably 15-20 times a day. I'm not exaggerating. I break down and do it maybe 5-7 times a day. He's almost a third of my weight and quite awkward to hold. It's sweet but also very heavy. He wants me to carry him around stores and the post office. He gets envious if I dare hold any other baby (greatly reducing the amount of other-baby holding that I do, because I don't want to hear "HODE ME! HODE ME!" for the rest of the day.)

He can swim without floaties and when Em's mom said, "What a big boy! You're not a baby anymore!" he glared at her as I explained that he was still a baby and had intentions of staying that way forever. "Really?" she asked him.

And I know I'll miss my baby when he grows up--but I'll never be able to honestly say that I didn't get enough time with him as my baby. Because he's holding onto babyhood for as long as humanly possible. 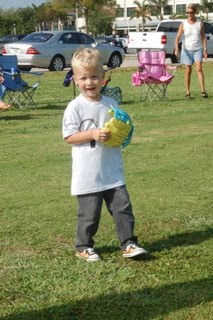 Email ThisBlogThis!Share to TwitterShare to FacebookShare to Pinterest
Labels: and actively trying to stunt his own growth

My baby just turned 7. I can't carry him at all and he totally squishes me if he sits on my lap. He does still like to cuddle with me a bit though. I'm holding onto that :)

I think that is really sweet. My little one says, "hah me" all the time. Screams it actually. Then when I pick him up he says, "heaby Momma, heaby" LOL Yeah. He's heavy.

I'm doing the math, how much does he weigh?