Busch Gardens: the Weird and the Wonderful

We had an amazing time at Busch Gardens this weekend; the kind of time that makes you wish your kids could stay small forever. 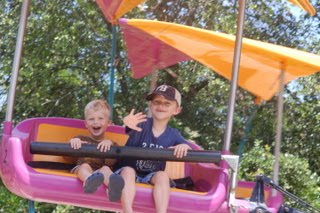 (Until the drive home, when you begin estimating the number of days until the youngest's 18th birthday and begin to brainstorm feasible reasons to leave the country at that time.)

At 3 and 6 (4 and 7 in August), they are at that magical stage where everything is an adventure and they are pretty easy to hang out with. Mr. Ashley and I looked at each other in wonder as we passed the sweaty parents pushing strollers in crowded areas and carrying dangly-legged newborns in Baby Bjorns in 90 degree heat, and wanted to high five at that finally not being us. Don't get me wrong, we loved it when it was us but holy heck is it easier to get around these days.

Busch Gardens is awesome in itself and I may even like it more than Disney. The mix of animals, rides and places to hang out is nice. The animal enclosures are beautiful, compassionate and designed to bring the animals close to you. In the Gorilla enclosure, we watched a mommy gorilla lean against the glass window we were behind and nurse her baby as the daddy lounged in the grass with his hands behind his head and observed us back. As we were climbing some net play enclosure thing, we found ourselves just a few feet from big hanging bats in the adjacent netted enclosure. The rides were fun, there were splash pads and water play areas all around the park, and unlike Disney, they serve beer, if you're into that type of thing. (I am.)

They also opened a new Sesame Street play area which was incredible. I wanted to push kids aside and run across the gigantic bouncy floor area and splash in the water area and run through the net tunnels like they got to. But I didn't, because security was present.

Unfortunately, the Sesame Street 4D movie gave Big Kid a mild form of Post Traumatic Stress Disorder. In 4 different scenes, water shoots out from the seat in front of you as something water-related happens in the movie. I'll admit that it was irritating--the number of times was excessive and if you were short, you were more likely to get hit in the face. It was also early in the day and we weren't hot yet, so sitting in the blasting air conditioning in damp clothing wasn't fun but it was no big deal. Except to Big Kid.

He was super mad about it and felt like Sesame Street had done something mean to him on purpose; he couldn't figure out why they would think kids might like getting a surprise squirt of water to the face and over the course of the day he kept bringing it up and getting angrier each time. We finally just had to tell him that he had to try to move past it and that we didn't want to hear about it anymore.

But moving on from it just wasn't possible for him, so he would just try to frame it differently: "Mom, what was your favorite part of the 4D movie?"

"I don't know. The underwater scene with the bubbles?"

"Hmm. I'm thinkin' Cookie Monster because there was a giant spaceship cookie, and that was the monster instead of Cookie Monster, and there was no squirtin' water." Then he'd look at me quickly out of the corner of his eye to see if I had caught on to the fact that he was still obsessing over the water.

It went on all day Sunday. He mentioned it again Monday morning (by bringing up his favorite scene and its non-liquid merits) as soon as he woke up . On Tuesday, I saw that he wrote this in his class teddy bear's travel journal: 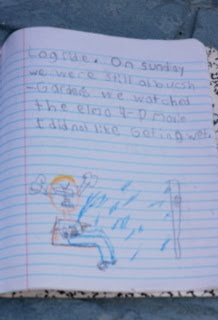 It says, “On Sunday we were still at Bucsh Garden's. We watched the elmo 4D movie. I did not like geting wet.” 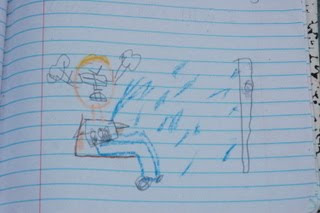 Since we hadn't really taken the class bear into Busch Gardens, we had previously decided that the journal entry would be about the car ride and playing in the hotel but I guess he was still working through the trauma and needed to record it for posterity. Which I'm kind of glad about, because it's pretty funny.

And if you can't laugh at childhood trauma, what can you laugh at?

What a wonderful artist he is -- I love the steam coming out of his ears. Makes me mad about that water for him!

Sounds like a good time! I love BK's picture, the steam coming out of his ears from anger is very illustrative. I haven't been to Busch Gardens in years bt really liked it when I was there. Sesame Place used to be owned by Busch and I worked there for years. I guess that's where the new Sesame area comes in although they're no longer owned by the same company? Hmmmmm.

Disney allows beer and wine too, just not at the Magic Kingdom, yes, I'm into that too.

Sounds like Bush Gardens has gotten better. It's been 10 years since I've been there. I'm a Disney girl. Disney serves alcohol, just not in the Magic Kingdom. But one can get drunk at Food and Wine Fest at Epcot.

just add that to his therapy later on, be sure to keep the piece of paper it will come in handy for the therapist.

You can tell BK that he is not alone in hating 4D things--when I was about his age my family went to Disney for the first time and did the Bug's Life 4D. I didn't like the water either but I absolutely FREAKED OUT when they shot air on us to make it feel like bugs were crawling all over. So creepy. I was so upset with my parents for the rest of the day for doing that to me hahaha.

Poor kid! I think you should send a link to Busch Gardens.

I've never been to Busch Gardens, don't think they have any around here.

I'm so glad those days of babies are done! But as they get older they just want to take off with their friends and leave you behind and you're all WAITTTT come back! I want to play with you ;o)