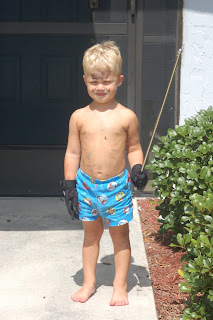 Note the batting gloves and curtain rod. That is paint on his face, but don't worry, he PROMISED me that he had never, ever removed the brush from the paper. The paint smeared across his forehead was from an unexpected and isolated splash of paint, and was not his fault. Nothing ever is. 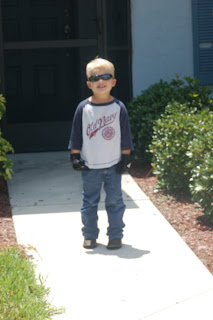 He's not allowed to take the curtain rod out of the house, and lately I've been restricting the boots and gloves since it is so hot. He switches the boots out with black Converse with flames on them and still fights to wear his corduroy pants or jeans in 90 degree weather. I request that he wear flip flops or Crocs so I don't have to tie laces, but he resists as often as possible.

"But I'z your sharp-dressed man, mumum! Dis is what I wears!" he answers, making me regret ever affectionately calling him that.

He does get a lot of attention dressed this way.

Probably mostly from people wondering why I would dress him in boots, pants and gloves during a Florida Summer.
Posted by Unknown

Email ThisBlogThis!Share to TwitterShare to FacebookShare to Pinterest
Labels: choosing my battles, he dresses himself

My daughter used to wear cowboy boots and a miniskort when she played softball.

you know what they say-"Pick your battles" and since he is such a cute sharp dressed man it's hard to argue that one:)

When we lived in St. Augustine Florida, my 2 year old refused to leave the house wihtout a sweater on. even in summer. And a hat. My neighbors told me they thought she had some sort of disease where she couldn't get any sun exposure.

That's funny. And he's very cute. I'm impressed with his stamina; you'd think running around in that outfit in the sun would get old quickly. He also looks more like Big Kid than I remember; they're both adorable boys.

I know how you feel, I sometimes think that people wonder who the homeless kid is with me.
PS-so happy to get a post this morning...I have been missing the LK and BK stories and so needed a laugh!

My little brother had these pants when he was LK's age, "kid proof pants" and he wanted to wear them everywhere. Being a teenager I HATED them. The pants were like two inches too short and I could never figure out why my mom would let him wear them, but now that I'm a mom I totally get it.

My boys have a deep rooted love for rain boots. In the summer it's rainboots without socks and 110 degrees in AZ, they get ripe. But they love them and little old ladies go gaga over them.

One woman rolled her eyes once and said, "Oh man, when they get to pick thier clothes IS such a rough stage!" I disagree - I think they are so cute in their independence. Soon enough they'll just want to fit in. Okay, maybe not Little Kid. : )

So cute! Wait until he's a teenager..just wrote about mine and this very subject.

LK is too funny. I can vividly remember sending my kid to daycare with shorts, rainboots, no socks, and a tank top one fine summer day. All because that's what he wanted to wear. Sometimes it is ALL about picking your battles. :)

Back when Thundercats were all the rage my brother used to play with a turkey baster.

I HAVE THE POWER

Yeah that would be embarrassing to have your kid be dragging around with him.

He's getting so big so fast now! And really starting to look like his older brother :)

I love his fashion sense - he's like a little Macgyver with the gloves and curtain rod! Ready to break into or out of anything in a flash. Tooo cute!