My sleep cycle was all messed up last night, probably as a result of my 36 hours in a sweaty coma, and I woke up at 2am and turned on the television, delighted to luck out on some "Real Housewives of Atlanta". Woo-hoo. 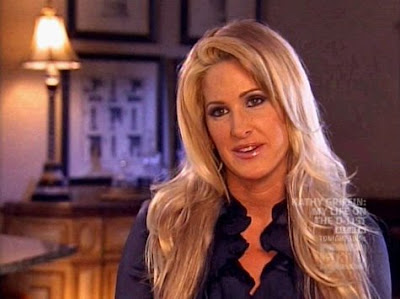 Maybe in drag queen years. Either that or she's forgotten about a decade and a couple of dozen Botox injections.

Luckily the 2 episodes I watched were followed up with the tell all, group interview show where they threatened to beat each other up, revealed that the tranny above wears a wig and accused each other of being talentless (so true).

Only in Hotlanta. It was worth being up until 5am for.

I think they should move the Hotlanta ladies in with the OC ladies. THAT would be a reality show worth watching.
Posted by Unknown

Email ThisBlogThis!Share to TwitterShare to FacebookShare to Pinterest
Labels: Trannies and cat fights

Oops, that anony-post was from me...

I love this show...and I have to admit, though rather shamefully, that I have found myself staying up way too late on several occasions watching the mini-marathons on Bravo.

(and her singing is way worse than her hair)

Housewives of Atlanta are GHE-TTO.

I love how the women think they belong to some kind of elite class when the only reason ANY of them have any money is because they married it.

I just love the message that sends. Girl power.

I love all the housewife shows...but between you and me the OC gals are me faves. Hang on to your Daddies girls...:) love it.

How about the one who expected a 7 figure divorce settlement that told Kim she could sing and bad mouthed everyone on the show? And then decided she could design clothes and then got mad when her "designs" came back looking like azz when she didn't even tell her stitchers which fabrics to use, just sent teeny tiny little fabric swatches to go by and then blamed them when it looked bad and then tried to have a fashion show anyway. NeNe and Lisa were the only ones with brains on the show.

I thought the OC women were "out there" until I saw the NYC ones... but when I saw the ATL ones, I about died! I was SO embarrased to be from the south after watching this show!

Sadly the tranny really is 29, 30 now (maybe). According to her drivers license from ATL and CT (where she was originally married) she was born in 79. Please don't ask how I know this, I don't even know how I know.

Yea, I will stick with my OC Peeps.

And the most fabulous thing is, the OC Peeps go to all kinds of local places near me.

Those Atlanta gals are trashy as all hell.

YES! I'm so done with those NY wenches.

Those shows are my guilty pleasure...but yeah that chick really is 29. I'll be 29 this year, and while I'd take her figure, I'll keep my face and hair.

Oh hell to the no...those bitches are TRANSPLANTS! Do you hear me?...TRANSPLANTS from another state. They DO NOT represent the ATL or any surrounding area.

Ok, maybe snotty-assed Buckhead area or in the even snottier Alpharhetta, but NOT the ATL as a whole.

I'm sorry you were subjected to this mess of a so-called tv show.

Those ATL women are from the upper-upper class white-trash-trailer park-convention. ;)

They prove that money does NOT buy class.

Oh so true, money does not buy class, nor do you have to have money to be classy. Take me for instance.....

I watch them, too, and I feel like I need a 12 step program for it. I am so hooked! I do love the OC ladies, but you can have the NYC and Atlanta gals. I love Vicki from the OC, she cracks me up. If I had money, I bet we could be friends.

I should make not watching BRAVO my New Year's resolution, but I don't think I could go cold turkey. It's my drug of choice.

I used to have a driver's license that said I was 21. But I wasn't.

Those shows are hysterical--such fools they put on TV. I love that crap

Thank you, Irish. (Hi, btw!) Those women do NOT represent The ATL very well at all... I was seriously appalled when I tuned in for the first time expecting to see some classy, old Atlanta sahm talking through clenched teeth and saw THAT...

And if anybody thinks that gal is under the age of 39, they're fucking crazy. I'd bet she's (he's) older than that... Come on.