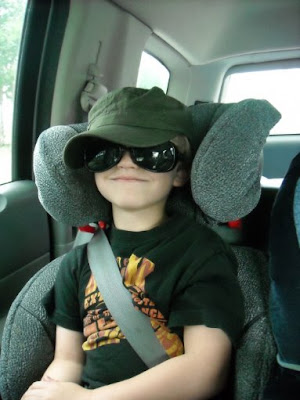 I know it's been so long since you've seen little kid that some of you are starting to get suspicious, but I swear we still have him. He's just at an age where he's hard to catch on film, sort of like the Yeti. You'll see him soon, I swear.

In the meantime, there is Big Kid in his new sunglasses (in the Fort Knox of booster seats).
Posted by Unknown

Is that the britax booster? I'm trying to find another one and I don't think they make them anymore.