Now don't get me wrong, because I am not a fan and it was definitely a good thing that he ended up in jail, but is anyone else surprised that Charles Manson is still in jail 40 years after convincing some other people to kill people? 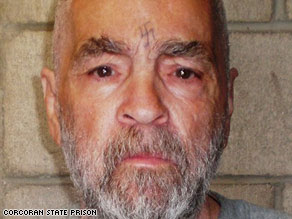 He never actually physically killed anyone. Sure he was batshit crazy, probably schizophrenic or something, but who is crazier, a crazy person or a group of non-crazy people who follow a crazy person around and kill innocent people at his request?

You can tell by watching any interview with him that he is an evil and dangerous person, I just don't know if the same sentence would be upheld if this sort of crime happened today. I've always been interested in that whole situation and was surprised to see his newly released mugshot. He looks old and tired and like he's lost the previous wild, psychotic look he used to have.
Posted by Unknown

Email ThisBlogThis!Share to TwitterShare to FacebookShare to Pinterest
Labels: the swastika doesn't help

But you know if they let him out that there are people out there that are crazy enough to start following him again. And they would kill people if he asked them to.

I had a conversation about this at work the other day -- I'm amazed how many people think that he actually committed murder (one guy thought he had killed fifty people himself). He has lost his wild-eyed crazy look -- he looks like a sour old man now. And I don't think he would still be in prison 40 years if he had committed those murders today. He would have been in the psych ward until they deemed him rehabilitated.

He actually got the death penalty and was only 'saved' when California abolished that and commuted his sentence. So he SHOULD be dead by now.

I read Helter Skelter and he really was way too dangerous to be anywhere but prison. Before the crimes he had committed rape at knifepoint in institutions and had done other violent crimes. He would have been a predator in a psych unit, preying on people who could not defend themselves.

I suppose poor Hitler was just misunderstood, too. Just because he was the leader of Nazi supremacy and minority cleansing doesn't mean he should have been burdened with as much responsibility for all of the heinous crimes his followers committed.

Do you know what Manson had his followers do to those poor victims? I don't think you know and understand all of the facts and evidence against Manson. He belongs in prison for life.

Please, spare me the dramatics. I never said he shouldn't be in jail, I am just surprised that the sentence has been upheld for so long and doubtful his punishment would be as strict if it happened now.

Ashley - Nice response to the Hitler comment. Who would have thought I could smile at a comment regarding Hitler and Manson.

I'm not sure about the length of the sentence. After all, we're likely sending Bernie Maddoff to prison for life (under the Federal Sentencing Guidelines) and he didn't even kill anyone. By the way, Anonymous, I'm not saying that Bernie Maddoff doesn't deserve life in prison.

I misunderstood you. It looks like you are questioning the severity of his punishment based on the fact that he was the mastermind and not the actual executioner. See your second paragraph of your original post.

I'm just surprised that they were legally able to charge him with murder when he wasn't physically there. I think modern day defense attorneys would be able to get out of it, there would be reasonable doubt just based on the fact that he wasn't present.

Besides, if someone, ANYONE, tells you to brutally murder and disembowel a pregnant woman along with several others, I think the responsibility is really on you to flat out refuse, at the very least.

He's a truly fucked up individual, and in no way could he have ever assimilated back into normal society, I just think it's a unique case since they were able to charge him with murder for convincing others to do so.

I have lots of clients that I represent on appeal that are doing life sentences, who were not there when the murder was committed.

Accountability is based on being a part of the offense, which can be as easy as driving someone to it--or in one of my cases, an off-handed comment that but for the boyfriend's family, they would live happily ever after. Boyfriend killed his dad, and got 30 years. My client, the girlfriend got 50, because the judge said but for her, it would never have happened. As little as that is sufficient under the law to find someone guilty of murder under the accountability theory--and they are convicted of the same crime the actual do-er was. In some states though, the person accountable for the offense cannot get the death penalty, where the do-er can.

Murder sentences have actually gotten longer, over the years, not shorter.

I am fascinated by Charles Manson--what a freak. He has been up for parole before, and never even gotten close--I am sure he will die in prison. There is added incentive to that becuase the case is so well-known as well.

It is a shame that someone with so much charisma, charm, and ability to control people did not use it for good instead of evil

Thank you for your always articulate and well researched response. That's why you're The Boss!

I'm still waiting for your book!

Just looking at him makes me realize that evil does have a name. Your perspective is interesting, I've never thought of his sentence that way before.

Not that this has anything to do with your point here, but my uncle and Charles Manson could be twins. Well, except for the fact that Manson has a decent haircut and a swastika on his forehead, and my uncle doesn't.

I too was surprised the first time I discovered that Charles Manson himself was not the one who actually killed all those people. However, I do understand why he was convicted. He incited the actual crimes, and since they proved he had a Svengali like hold on his followers, he was considered as guilty as the people actually committing the crime.

If a crime is heinous enough, and the Manson killings certainly fit the bill, I'm sure that he and his little cult would have received much the same in the way of sentences. So, yeah, I think he would have gotten the same sentence.

And he does seem to have lost that maniacal gleam in his eyes. Good, hopefully he finally realizes that he wasted his life, and is horribly depressed and miserable about it. Maybe the people who died at the hands of his followers haunt him while he dreams. I hope so.

My DH works in the prisons for California and had to fill in at the prison he is at and had to actually fix something in Manson's jail cell and he said that that man is the most creepiest man he has ever been around. Of course they cuffed him and led him out while the electricians were doing their thing but Manson stared them down and my DH said it was so eery nowing what he had done.

Old and tired? Do you not see that dark sea of evilness that menacingly stares back at you? Dude is evil.

This guy is a god damn freak. he is the most evil crazy man to ever live. i mean seriously, if having inocent people killed really gets you off than you are a fucking phsyco. i hope this guy and all of him "family" rot in prison forever and die very slow painful deaths. the only thing i would wish more than that is that he gets out on parole and the second he is out someone kidnapps him and takes him somewhere and tortures him every day till the day he dies causing him the most pain and agony someone could ever fucking imagine. i hate this guy and wish i could get into a room just me and him so i could personally fuck him up and kill his ass. it just pisses me off thinking about the cowardly acts he did or had done by his phsyco piece of shit "family" do...fuck them to, i would kill all of them in the drop of a hat. fucking cowards. i just want justice and honestly i dont beleive rotting away in jail for the rest of their lives is good enough. these mother fuckers need to be tortured to death and die slow and in as much pain as one person could ever think of. fuck them, i wish all of them the worst of anything to come. fucking piece of shit cowards

r u serious? this guy is insane. he might as well of killed them because he ordered the family to kill them fully knowing that they would listen and do anything he would say. this guy belongs in the deepest darkest most lonley secluded cell in the most secured prison. i honestly think this guy belongs in guantanamo bay with the terrorists. phsyco....i hope he gets but raped in prison everyday and gets beat to shit by the other inmates, cause if i had the chance i would seriously hurt this phsyco