A Pirate's Life For Me

So, now that I'm over the whole Disney thing, it's time to start planning the next big thing...Halloween! I LOVE me some Halloween. I love the decorations, I love the costumes, I love the whole ordeal.

Well, now I'm feeling all depressed and my zany costume ideas don't seem nearly as much fun as the matching swirled velvet bell bottom and mini dress/pimp and whore outfits Mr. Ashley and I used to wear (I was the whore, in case anyone was confused). Next time we went I was going to be the St. Pauli Girl...and now I'm realizing that there will be no next time and on the off chance that there is, it probably won't be pretty.

Wouldn't this have been perfect, though? 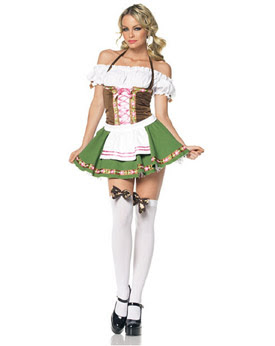 Holy crap I would have been a goddess in this outfit 5 years ago. Probably not appropriate for Hallelujah Night with the Baptists, huh?

Someone buy this and let me live vicariously through you, k? I know some of you have got it going on and will probably be shouting Hallelujah for other reasons on Halloween night, so go ahead and get this Bavarian Maid costume. It's only $50 at Costume SuperCenter

. Maybe I should get it for Mr. Ashley's birthday (for me, not him). That would mean binge dieting though...which I really need to do anyway. Hmmm...

So anyway, back to Halloween. I had a couple of great ideas. One of the girls on one of my boards has an adorable picture of her son in a Cozy Coupe ride on toy that has been painted to look like the Geek Squad car. I wanted to do that and dress the little kid in black slacks and shoes and a white, short sleeve button down shirt with a black tie and Geek Squad tie clip. At some point Big Kid said he wanted to be a box, so I was going to let him be a computer box or a computer. Wouldn't that have been funny? I also wanted to do Curious George and the man in the big yellow hat. However, the Big Kid actually has a request this year and he wants to be a pirate (yawn, unoriginal). I have nothing against pirates. The thought just doesn't have me jumping up and down. Now if I got to wear this: 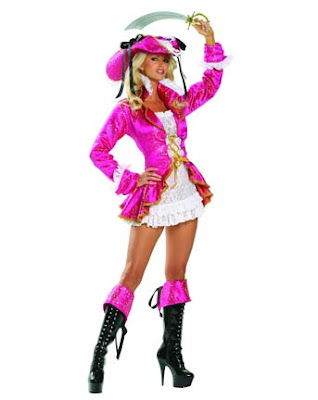 Then there just might be some jumping up and down. However, at $120 this one is a fantasy on a few different levels. (once again Costume SuperCenter

, this one is called the Sexy Pirate Captain, original name, isn't it?).

They had all kinds of sexy pirate costumes, but once again, because of the Baptists and the whole kid-friendly holiday thing, I will have to most likely wear something boring. What about MY Halloween? When did IT stop mattering? Sigh.

So anyways, I'm thinking maybe the little kid could be a parrot? I'm going to turn their wagon into a pirate ship with sails and treasure spilling over the sides. I want the little kid to at least be something halfway interesting. I saw some cute home made parrot costume ideas here and got it into my head that I could just whip something up myself but every time I try to convince Mr. Ashley of that he is strangely silent.

Just a onesie, a hoodie, some leggings, some felt, scissors, heatbond stuff and an iron, right? Maybe some feathers and hot glue? How bad could it be? I think he's picturing open wounds, 3rd degree burns, feathers stuck all over me and me sobbing the night before Halloween. He thinks I should just buy this: 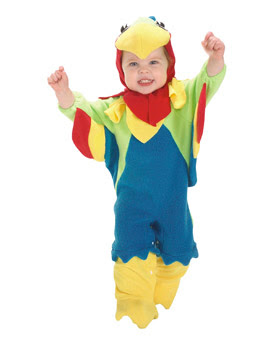 Meh. It's only $21 and it's pretty cute but it doesn't seem to come in little kid's size. I really do think someone could make a much cuter one, the question is whether or not that someone is me.

I also have to figure out what exactly the Big Kid is going to wear. I don't know if I want a store bought pirate outfit, or to mix and match things or to beg SMIL to make me something or what.

What if I go through all of this trouble and those little punks decide to not wear anything on their heads? Big Kid says he'll wear a hat but he never usually will. The last two years he has had pajama costumes because of last minute meltdowns. A glow in the dark skeleton pj set from Gymboree and a Dash Incredible uniform pj set from Disney. I was hoping to stay away from the whole hat thing (yeah right, because the monkey/man in the big yellow hat thing wouldn't involve hats, right? Excuses). The little kid won't wear hats anymore either. These damn kids, they sure know how to screw up a good time.

What are you all doing for Halloween? Have you even thought this far ahead yet? If you get anything from the Costume Supercenter, you can get 15% off any costume $35 or more!

So that's at least something. Does anyone have faith that I could pull off the whole parrot thing without the little kid looking like a furball?

I could do it, right? Right?

Email ThisBlogThis!Share to TwitterShare to FacebookShare to Pinterest
Labels: Yo ho Yo ho

I am picturing awesome parrot costume that would require zero sewing. Email me, and we'll discuss.

The Kiddo is going as a polar bear, and I'm going to soup up his wagon to look like polar ice caps. I may include Al Gore somewhere on the float. I mean, wagon. Or not. Kiddo may just have to settle for being a really cute polar bear, because Momma is busy trying to sell her house.

My 2 year old is going to be a gypsy. I'm making her a peasant top and skirt and will either string some beaded necklaces for her on kevlar string or find her some junk jewelry to wear. I'll make her a head scarf but I doubt she'll wear it long. She's pretty anti-hat too.

The polar bear and ice caps sounds adorable. Are you moving again, Deb? Why? (If I may ask...)

I'm going to try to do a Noah's Ark theme because we will also be partying with the Baptists this year for Halloween. I'd like to make two sides of the Ark and attach them to the Sit & Stand stroller. Then each of my 4 young 'uns can be an animal. My creative friend Sherri suggested that each kid hold a stuffed animal that matches their costume, so that there can be 2 of each animal. I think I can easily do a tiger and monkey. Not sure what the other 2 should be. Oh yeah, I want my big kid to be Noah. So I only need 3 animal costumes. Tiger, monkey, and......I dunno. We'll see.

Oh yeah, I forgot to say that I'm sure you can make your own parrot costume. I'm 100% sure of it. Get started soon so that if you run into any unexpected difficulties, you have time to do some damage control.

I would totally be that sexy pirate for Halloween!

I am ordering The Wild Child the kitten costume from Lillian Vernon- I think she will look adorable.

The Politician is another story- he was so far refused to wear costumes, so I don't know that I'm going to shell out money for something he will probably not wear. Last year I bought the Lightning McQueen Pit Crew costume, and he instead wore a parrot visor to trick or treat. With his regular clothes. Yeah, I was THAT parent- the one that sends their kids to trick or treat with a half-assed costume.

After seeing you in all your hawtness on the Disney pictures, I totally think you could pull of the St. Pauli Girl....or maybe its just a fantasy of mine??? Either way, its great to have you back and posting!!! Glad you all had a good time and as someone else said - Holy Beautiful Breeding on the kidlets!!!

My 3 boyz are going to be Captain Hook, Peter Pan and the tick-tocking crocodile.

In my head anyway.

My two are going as mummies. They wanted to be ghosts - but I couldn't find a costume and the thought of making one that I was really happy with was overwhelming - buying the mummy costumes was easy. We are ready for Halloween!

Have you checked babystyle? I got my beast of an 11 month old (he's a big guy at 24 lbs) the octopus. They have so many adorable ones and they are not every expensive at all. I think it was about $24. As far as my 3 yr old she just can't make up her mind.