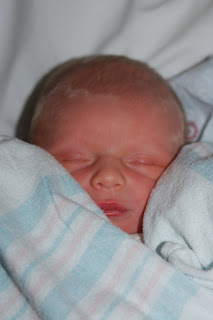 Here's Ethan! He's so sweet and perfect, we're all totally in love. Big Kid in particular, he can't stop talking about how cute he is and how he just wants to stare at him all day.
little kid's not as impressed. He had been getting rather hostile to the idea of a new baby in the last few weeks, even blaming "baby E-fan's " arrival on him having to turn 3. He would get sad any time I mentioned Ethan and would start talking about how he was still a baby. I finally sat him down and promised that he would always be my baby, and Ethan would never be my baby--that he was Uncle G's baby. He claimed to be excited about the idea from that point on, but I was getting some dirty looks as I held the baby and when we urged the boys to say goodbye, Big Kid gave him a heartfelt goodbye and a kiss and little kid gave him a casual, half-assed, see ya kind of wave from across the room. When we ask if he thinks he's cute, we get a distracted mmm hmm. I think he's trying to like the idea of a cousin, but doesn't want anyone trying to steal his thunder.

Here's the elephant we gave Ethan, you can't see its cute eyes or the different pattern on the bottom of his feet, so you'll have to take my word for it on it being extra cute (like Ethan himself) 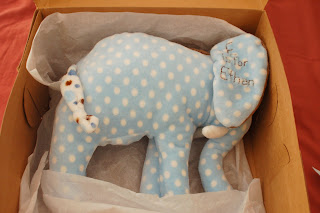 He is beautiful! Congrats.

I think Ethan is adorable! And I think little kid will warm up to him soon too.

SO sweet!! Is it just me or does baby E-fan (we have one of those too)look a fair bit like either BK or LK (I can't tell which for sure, but I'm thinking LK?)

Loving on other people's babies is so fun! That baby shower looked amazing!

OH, that picture makes me ache!! I thought I was done having babies!! WHY did this picture make me question that?? He's so adorable, enjoy the new addition to you family.

E is for edible....which means I want to eat him up!! He is beautiful - please sniff him for me, I long for that newborn smell!! Congrats to the whole family!

Sweet baby boy. New babies are the best. They are so grunty and cuddly and sleepy. Mmmmmm.

What a complete doll-baby! Ethan is absolutely beautiful and is very lucky to have one kick a** Aunt like you! Enjoy him and congratulations :-)

Is it me, or does this child resemble Big Kid?
He's beautiful. Congratulations!

Ooooh - he is so adorable!!! And thanks for including a pic of my elephant - a customer gave me a heads up. ;) Your baby shower looked absolutely amazing!

He's so pretty! I know you're not supposed to say that about boys, but really, he's beautiful!

That is definitely a pretty baby.