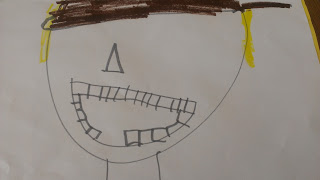 Yesterday was student-led conferences and it went okay, because there were cupcakes.

But in reviewing little kid's work, I read a story he wrote of when he lost his first tooth. It included how I told him "good for you" and to go away when he tried to show me. Which is fine and all...but it never happened.

"So you decided to make something up that makes me look mean?"

"This is kind of embarrassing for me. It makes me not like the story very much because it's not a real memory--since you made up a whole section about me being mean."

"It's real except for that part."

"Yeah, I like all of the rest of it. That made-up part is kind of the problem."

At that point, the parents at the next desk over were glancing over like I was the mean one (which is not true, he is the mean one) so I had to drop it.

But I do wish I could tell the teacher that I am not the mean one. 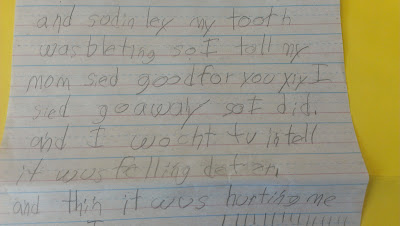 Email ThisBlogThis!Share to TwitterShare to FacebookShare to Pinterest
Labels: caught in a lie

HA! I obviously was much older, but for a creative writing class in high school, we had to write a non-fiction story. Mine was entitled "The Biggest Lie I Told My Mother", all about how I lied about getting kidnapped as a senior prank, when really I was at a dock party, and couldn't get home in time for curfew. I wrote (the excellent) piece with the confirmation from my teacher that should would not show it to my mom at parent teacher conferences.

That traitor showed my mom. I was livid, and still hate that teacher!

My daughter has done the same sort of thing to me. Where was it I heard someone say that teachers promise to believe only half of what the kids say happens at home if you promise to believe only half of what they say happens at school? Might have actually been this blog...Speaking of fiction, I wonder if you're going to (or have you already?) review the books you've read so far this year...I'm always looking for a good read!
Thanks!
Allison

That has been on the to do list for so long now, Allison! I know I need to! I think it's hard because there's no clear contender for best book for last year--I feel like it was a "meh" year for reading. I will think on it some more and get it done before 2014 (lol).

Samma, that is really funny! See, student-led conferences would've done you a favor.

That's pretty freaking funny. :-) I think it's extra mean of little kid, because it sounds like it could've really happened. It's not outrageous or an obvious lie. It just sounds like a cranky mom thing. You are not the mean one. ;-)