I found a baby at the fair tonight.

For one moment, while I held him on my hip and he snuggled comfortably against me, I kind of wanted to keep him. A finder's keepers kind of thing. I thought, "If this was a puppy, I would keep it!" and wished it worked like that.

After all, I rescued him from certain danger! I saw him emerge from a crowd alone and run around a corner. When I didn't see an adult chase after him, I told Mr. Ashley that I would be right back and followed him. By the time I reached him, he was at the end of the midway and had climbed up a small platform and under a locked safety gate and was climbing up the super tall slide of a closed fun house. No one else was around so I leaned over the gate and grabbed him by his shirt. He had curly hair and big brown eyes and was around 18 months old, if even. His name was Sebastian which was perfect for him, but I wouldn't have known that if I kept him and would have named him Alexander.

As I stood there deciding what to do, a man walked up and he asked if that was my baby, and when I admitted that it wasn't, he said he saw the mother screaming and crying nearby. It took a while, but we eventually found her. She has no idea about the fun house adventure her little guy went on, because she was crying too hard to talk. I'm glad she got her baby back and maybe it's better she doesn't know.

And the last thing I need is the kind of jerk of a kid that escapes at the fair...but he was so cute and sometimes I wish we had one more boy. Very seldom but sometimes. Very, very seldom.

Ten minutes later I found a lost 4-year-old. His mom wasn't as happy to get him back and I didn't consider keeping him not even for one minute.

At this point, Big Kid said, "This is the sort of place there's gonna be a lot of lost kids, maybe you should just worry about your own," because I guess he doesn't want a new surprise adopted sibling.

I also had deep fried Reese's cups, Big Kid rode a mechanical bull, and both kids zip-lined. But that wasn't nearly as exciting as almost getting a new baby. 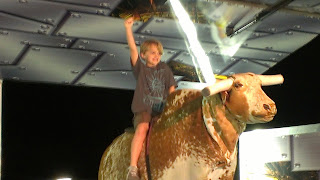 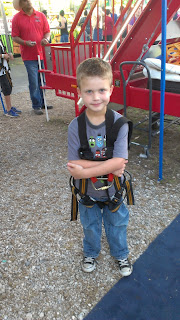 Email ThisBlogThis!Share to TwitterShare to FacebookShare to Pinterest
Labels: Mr. Ashley said he wouldn't have let me but he is not my boss

Oh my gosh! I know you're being chill about this on your blog, but how terrifying! That Big Kid... LOL

If you kept him...what would you have called him? Littlest kid? It would have messed up your mojo. Glad you found his mom.

Wait a sec, did you say deep fried peanut butter cups? What the? I mean. I can't even. Oh my.

(PS: thank you for saving the lost children of the world. I'm glad there are people like you out there every time one of mine makes a break for it...)

Side note- my two boys are Alexander and Sebastian. :)

The last time I helped someone find their lost kid they acted like I was the one that lost them and should be punished. Last time I help.