My vacation was like the movie Groundhog's Day, but in the best way possible. This was my activity list for 8 straight days:

Woke up around 9 or 10. Made coffee and complained about it tasting like mud, reminded Mr. Ashley that he had forgotten to pack the creamer. Mr. Ashley was sorry about creamer.

Wandered downstairs to the beach with the dog, took a long walk, collected shark's teeth and sea glass, waved to neighbors.

Floated in Gulf of Mexico with Big Kid, discussing internet memes (seriously--you know the only thing less funny than internet memes? Having them recited and explained to you), video games (he wants a classic Nintendo for his upcoming birthday. He knows everything in the universe about the entire Nintendo franchise and that is in no way an exaggeration. I have heard almost all of it), and his strange hatred of PETA (not really sure where he heard about them but he has a lot to say about it, including objecting to their objectification of women which I thought was hilarious and fantastic). I discussed these things with passion and interest. Turns out I can do just about anything if I'm floating around.

Sat on beach and read in the sun.

Moved chair under the house and read in the shade.

More reading in sun, this time with wine.

More reading under house, this time with wine.

Nap time upstairs for one to two hours.

Reading on balcony with ocean view while drinking wine.

Beach walk and more shark tooth collecting, usually with little kid who plans on opening a shell-selling enterprise that he can talk about for hours. We would also stop at a tangle of driftwood and ornament it with a shell. I tried to call it the summer tree but he insisted it was an offering back to nature in exchange for taking the other shells, which is way more imaginative and awesome than a summer tree.

Sitting on balcony staring at stars and discussing the possibilities of just refusing to leave. More drinking.

Every single day, with only very minor variations. I read four books. I saw five shooting stars, I found a handful of sea glass and hundreds of shark teeth. And yes, I still swam in that water.

I was so reluctant to come home, even after 9 days of no civilization and a dwindling supply of food. I could stay forever and watch little kid throw his tiny cast net or bait a fishing hook. He met a pack of other little boys and our house became their fort and research center as they caught crabs and fish in their nets and jumped and tumbled from our giant anchored raft. I walked miles and miles along the shore, sometimes in an effort to escape our Lord of the Flies clubhouse.

I did get stung by a jellyfish across the tops of both feet, which made all of the skin burn and blister for days. It was awful. As Big Kid said, "Jellyfish are jerks." Jellyfish are jerks and they can all die in a fire but I didn't let it ruin my fun. I did complain about it a lot though and the tops of my feet are still a mottled magenta color.

Also, the dog was adorable for the first three days. He walked with me, went on the paddleboard with me, swam out to the raft with me, and wasn't too obnoxious about other people or dogs. However, he would only be with me--to the point where he would fall down the stairs if left in the house with another family member and once jumped off of the paddleboard to swim to the shore where I was walking. He would cry if I swam and howl if I walked without him. He got lazy by day four and refused to walk farther than the neighbor's house, knowing there was no real destination to my journeys. He also got territorial about the house and decided no one could walk under it. The house straddles the entire beach and it's simply not reasonable to expect all passerby to swim around during high tide. He also does not like other dogs, not even if they like him, not even if they pay no attention to him whatsoever, he just does not like them to breathe air in his general vicinity.

It was his first, and last, vacation. It was like being with a colicky baby and I've done that already--who wouldn't hire a dog sitter for a colicky baby if it was acceptable?

Other than jellyfish and wiener dogs, it was the perfect vacation. I could live there, happily only ever seeing a few tourists and the handful of homeowners there. Our neighbors used to own the house we rented and raised their boys there until they entered kindergarten, and kept commenting that watching our family was like looking back on their past selves. They raced to pound on our door when rumor had it a sea turtle was laying her eggs nearby and brought us a bottle of wine after their expedition to a grocery store off island. They would make lovely neighbors. You think I'd be sick of the beach, living just a few miles from the Gulf here at home but no, I would do anything to be a little closer.

I am only glad to be home because of my cat and internet. Both missed me like I missed them.

(The cat more than the internet. Thanks, guys.)

Here are some photos: 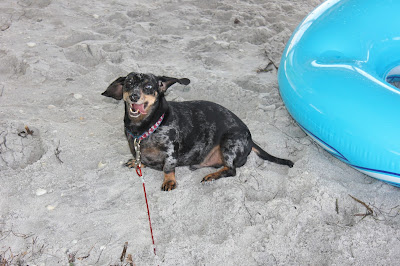 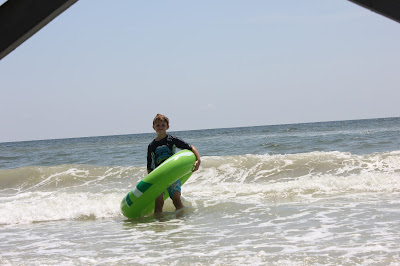 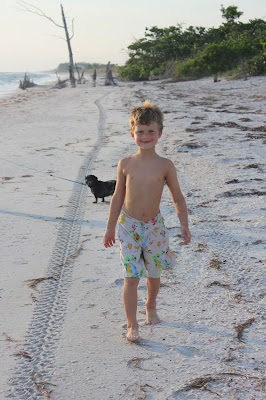 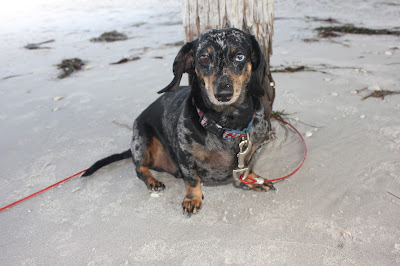 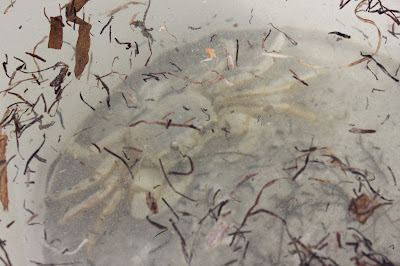 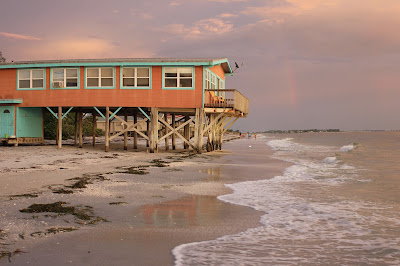 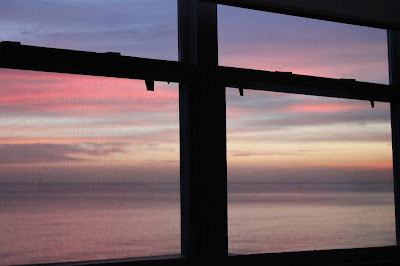 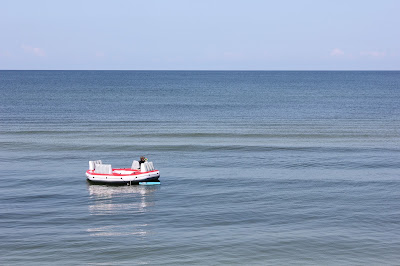 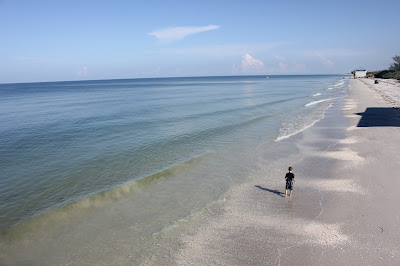 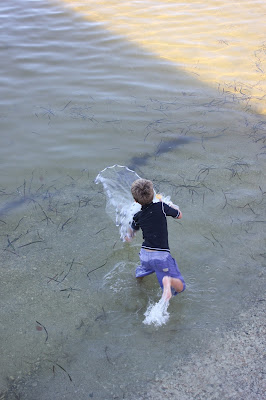 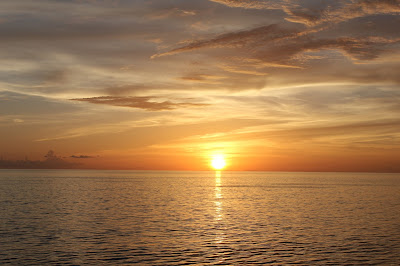 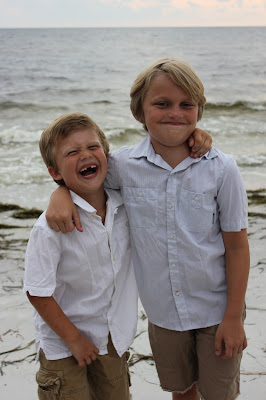 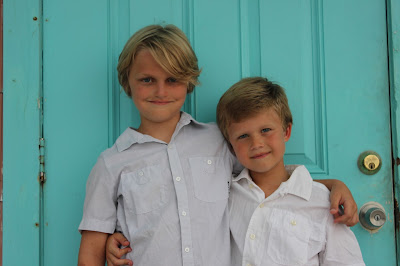 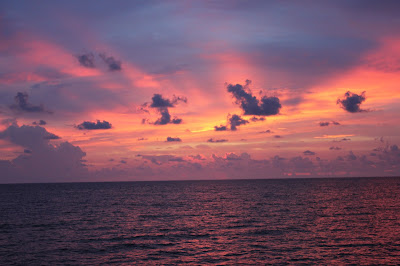 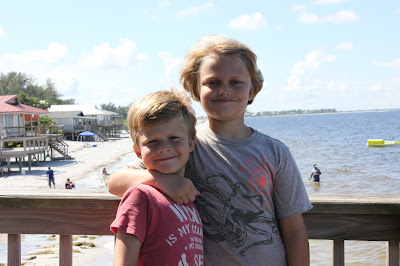 It was another vacation that left me feeling lucky.

Email ThisBlogThis!Share to TwitterShare to FacebookShare to Pinterest
Labels: who needs infrastructure

Pretty jealous of your vacation. Also, Little Kid looks a bit like Dexter.

Handsome boys!! Great pictures. Is he getting the NINTENDO?

Yes, he did, Katie. I've spent the last two freaking days blowing into cartridges and jamming two games in at the same time to make it work. He's THRILLED BEYOND WORDS. Me? Not so much.

Haven't heard the Dexter thing before but they do have similar jawlines, I think.

Aaah the quirkiness of the OG Nintendo :) I still have mine and love it - the controllers aren't nearly as damn complicated.

The crab was in a bucket, and was released (reluctantly). I also love the NES--I have to sometimes wake Big Kid up to get Netflix going on the Wii U because the gamepad just confounds me.

I feel your dog pain. If my dog had three broken legs he'd use the fourth to drag himself to the bathroom with me in the middle of the night. Other than that, it sounds blissful! So what did you read?!

I just laughed so hard at that, Lisa! Murphy is the same damn way. It's nice to be loved--but then there's being stalked in a way that makes you unable to live your life and then that's different.

I will do a book post in the next two days, I swear. I have too much to say about them!

Little Kid is so BIG now!!!

The kid and his dog pet obviously have fun.

SO... my goal was to not comment on new posts until I finished your entire blog in full (I'm in mid-2008 and started 2 weeks ago). I felt like I couldn't be on the same level of the other commenters until I had "earned my stripes," so to speak. Nonetheless, I have made an exception solely to say that your kids are FREAKING PRECIOUS.

Wow! I'm always so amazed by people who do that, Laura, I haven't even read back through it all and it's my life. You might know more about me than I do when you're done.

These days commenting of any sort is appreciated, we've lowered our standards to anything that passes as english.

If you ever do decide to read back through your blog, I recommend starting at the first entry. For some reason I decided to go backwards... needless to say, it has been a little confusing. At this point I'm ~ 5 years in and too far gone to switch ways.